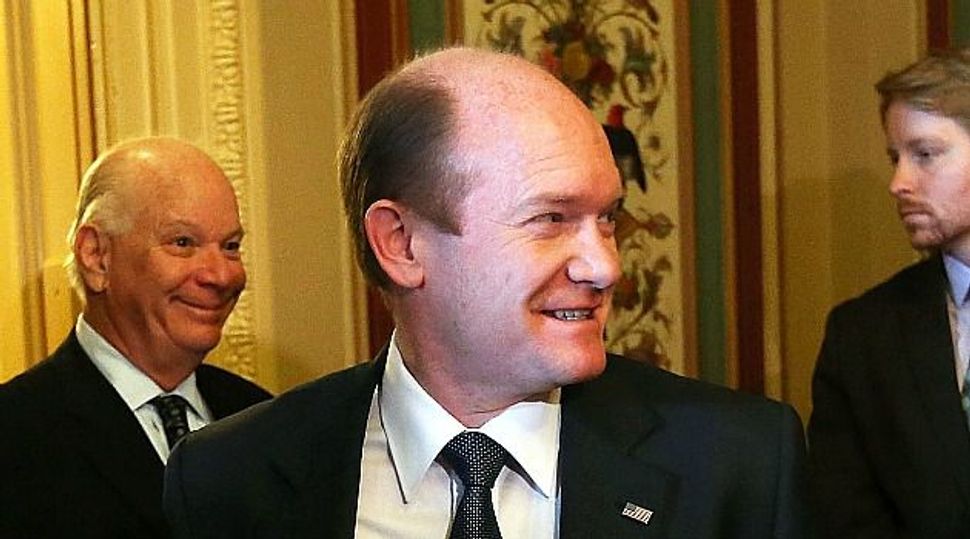 A Democratic U.S. senator on Wednesday offered an amendment to a an Iran nuclear bill that would remove the measure’s tie to Iranian-sponsored terrorism, a change that could attract more support for the legislation from his party.

Despite President Barack Obama’s threat to veto the bill due to concerns it would undermine final talks with Iran, many Democrats are lining up with Republicans to pass the legislation giving Congress a say in any final pact.

Senator Chris Coons plans to have his amendment called up for debate on Tuesday, when the Senate Foreign Relations Committee is set to work on the bipartisan legislation.

Negotiations are to conclude by the end of June following last week’s announcement of a “framework” deal for Iran to curb its nuclear program in return for an easing of economic sanctions on Tehran. It was not yet clear how much support Coons’ amendment will receive in the Republican-controlled Foreign Relations Committee.

But if it were to gain traction, it could help build Democratic support in the Senate for legislation establishing a process for Congress to vote on whether to approve or reject sanctions relief agreed in a final deal.

The Coons amendment would undo a provision in the Iran bill requiring the Obama administration to regularly report to Congress on Iranian support for acts of terrorism against the United States or any U.S. person anywhere in the world.

White House spokesman Josh Earnest called the provision “unrealistic,” adding that “this agreement is focused on preventing Iran from obtaining a nuclear weapon and that it is not going to succeed in resolving the long list of concerns that we have with Iran’s behavior.”

Coons’ amendment would be one of many likely to be debated as the Senate panel attempts to get its Iran legislation, which Obama opposes, into shape for a debate by the full Senate.

Democrat Chris Murphy, also a member of the Foreign Relations panel, aims to offer an amendment that would waive sanctions against Iran during any congressional review of a pact if maintaining them would be a breach of the final deal, an aide said.

Like Coons, Murphy wants to strike the terrorism language from the bill and clarify that Congress retains the ability to separately increase sanctions on Iran for its support of terrorist activities, the aide said.

Democratic Senator Barbara Boxer is expected to call for scrapping the entire bill that Chairman Bob Corker is pushing and replacing it with regular reporting requirements to Congress on whether Iran was abiding by the terms of any agreement and an expedited process for reinstating sanctions against Iran if it is violation of the pact.

Boxer wants the committee to put off its debate of the bill until negotiators conclude their talks.