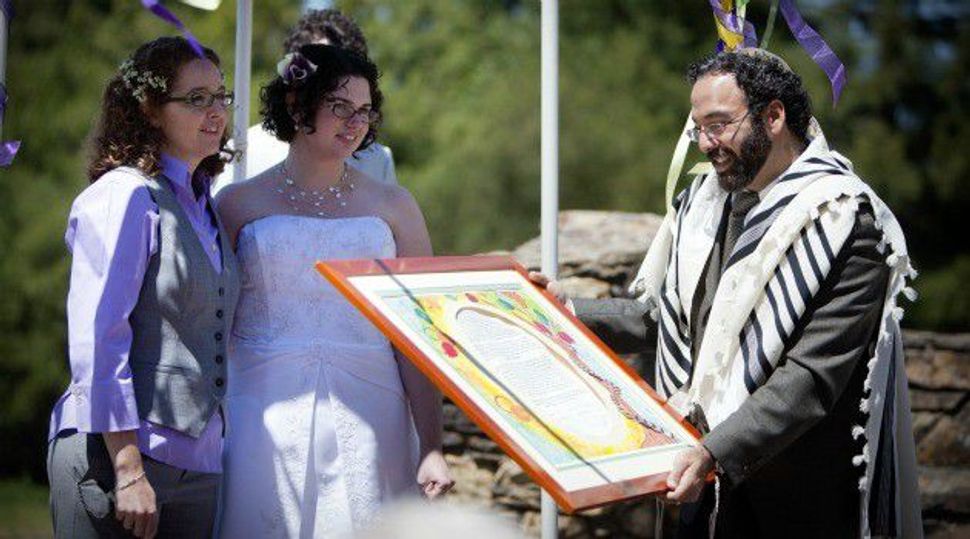 By the Power Vested in Me: Rabbi Menachem Creditor marries Margee Churchon and Kate Smallenburg in Berkeley, Calif. British rabbis are seeking ways to help LGBT Jews marry in the faith. Image by ALISON YIN AND ADM GOLUB

Rabbis from the Reform movement of Great Britain are launching an online matchmaking service with the intent of making it easier for gay and lesbian Jews to find Jewish partners.

The proposed website, which will cater to both gay and straight Jews, is the initiative of Rabbi Laura Janner-Klausner, senior rabbi of England’s Movement for Reform Judaism, and other Reform rabbis acting at the behest of English same-sex couples, according to the Religion News Service.

Unlike in the United States, where many Reform rabbis perform interfaith marriages, British Reform rabbis will only marry couples if both partners are Jewish.

Janner-Klausner told RNS that a large part of her motivation boiled down to the simple difficulty of gay Jews meeting other gay Jews in Britain.

“At the bottom of it all is the question of numbers,” she told RNS. “Jewish gays live in a niche religious community. They are a minority within a minority. If they want to remain Jewish, it’s even harder for them than other gay people.”

RNS reports that the Reform movement does not yet know when the service will launch.