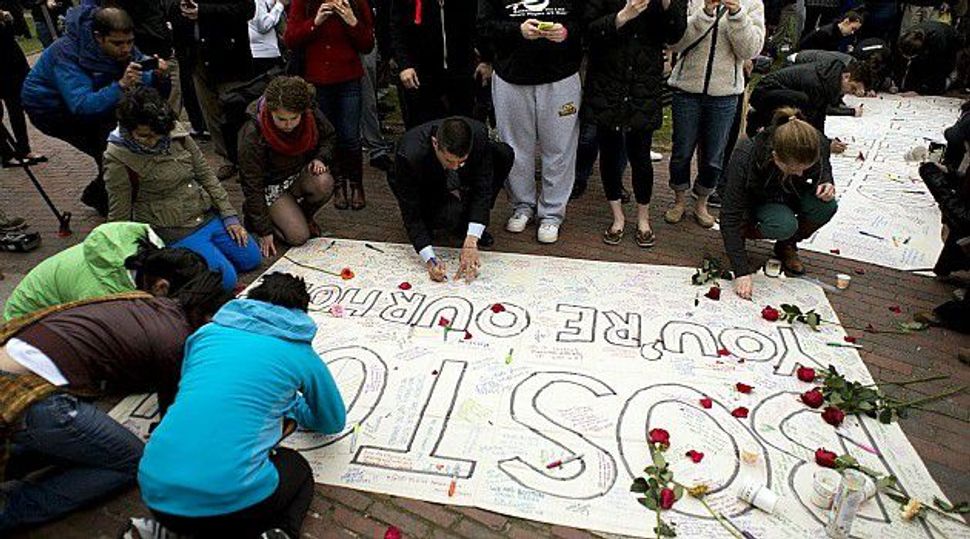 Dzhokhar Tsarnaev, 21, was convicted on all 30 charges Wednesday in a federal courtroom in Boston. The explosions at the April 15, 2013 Boston Marathon set by Tsarnaev and his brother killed three, including an 8-year-old boy, and also injured more than 240, including 17 who lost limbs.

Tamerlan Tsarnaev, 24, was killed four days after the bombing in a shootout with police. A Massachusetts Institute of Technology police officer also was gunned down in the aftermath of the attack.

At least 17 of the charges on which Dzhokhar Tsarnaev was found guilty can carry a death sentence. The sentencing phase could begin as early as next week.

“The jury’s guilty verdict against Dzhokhar Tsarnaev sends a resounding message that those who engage in such acts of terrorism will be held accountable and pay a hefty price,” Robert Trestan, the Anti-Defamation League’s New England regional director, said in a statement. “It is clear the jury agreed with the prosecution’s assessment that Tsarnaev and his brother worked together in plotting a coldblooded, intentional, calculated terrorist act and he therefore should be held to account for his actions.”

Trestan also said that the brothers were radicalized in part by “online terrorist propaganda geared toward young American audiences,” which shows “the seriousness of the threat from Islamic extremists.”

The American Jewish Committee in a statement hailed the jury for convicting Tsarnaev.

“The horror carried out by the Tsarnaev brothers was a wake-up call that Americans must be vigilant and united in confronting the ongoing threat of jihadist terrorism that continues to challenge our country and the larger world,” said AJC Executive Director David Harris.

“While the guilty verdict is very important in bringing some justice, we will forever remember the victims — Martin Richard, Krystle Campbell, and Lu Lingzi who perished in the bombings, as well as Sean Collier, the MIT campus officer shot dead, and the more than 240 who were wounded, many with significant injuries.”

The verdict came after 11 hours of deliberations over two days.