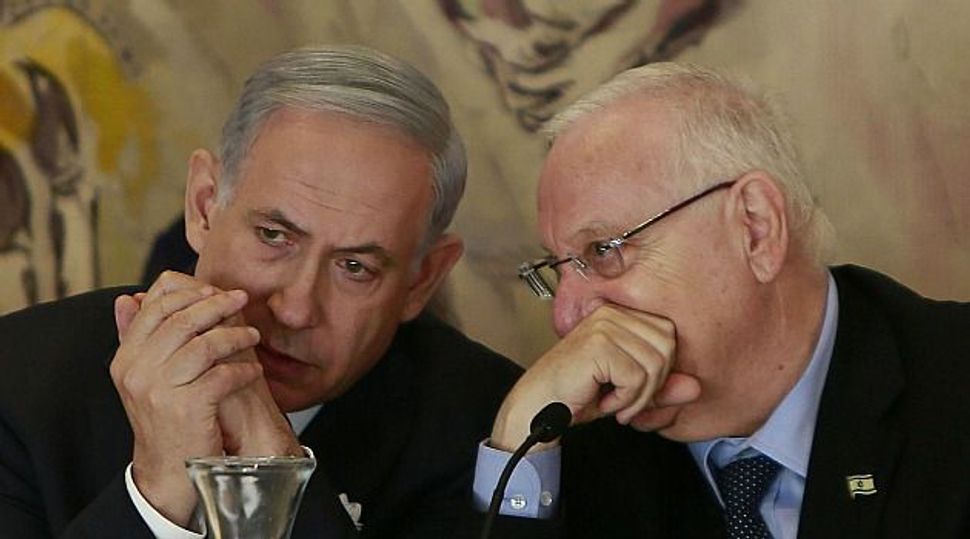 (Reuters) — Concerns over Iran’s nuclear negotiations and the need to repair relations with the White House may push Israeli Prime Minister Benjamin Netanyahu to seek to form a national unity government with his center-left rivals.

Political analysts pointed on Monday to a new position paper from the main challenger that Netanyahu beat in last month’s election, the Zionist Union, that echoed his criticism of the April 2 agreement between world powers and Iran.

The party document called for changes in a final accord to ensure a significant reduction of Tehran’s nuclear capabilities.

Netanyahu, head of the right-wing Likud, party, seemed to allude to such a governing option over the weekend, saying Israeli unity must be strengthened and pledging: “that is what we are going to do.”

Netanyahu has until May 6 to put together a government.

With the support of a new centrist party, Kulanu, and far-right and ultra-Orthodox Jewish factions, he would control 67 of parliament’s 120 seats and so would not need a national unity deal in order to form a workable coalition.

But including the softly-spoken Zionist Union leader Isaac Herzog in a new administration could help tone down a dispute between Netanyahu and U.S. President Barack Obama over the nuclear deal.

“Netanyahu needs Herzog as a foreign minister to repair ties with the Obama administration,” Aluf Benn, editor-in-chief of the left-leaning Haaretz newspaper, wrote in a column.

“In a right-wing government there is nobody who can carry out that mission.”

Herzog has not voiced public support for a unity deal – or ruled one out.

Asked about Netanyahu’s remarks on a need for unity, Interior Minister Gilad Erdan said they were “more than a hint” at an intent to seek an alliance with Herzog.

A poll by the Israel Democracy Institute think-tank on April 1 found 49 percent of Israelis favor Netanyahu ruling jointly with Herzog, and only 35 percent preferred a rightist coalition.

Some members of Herzog’s party have dismissed the idea.

“There isn’t any such possibility,” said Zionist Union lawmaker Hillik Bar, citing what he called failures of centrist and left-leaning parties in previous rightist-dominated coalitions to moderate government policies.

But the Zionist Union position paper said that, at least on the Iran issue, the party agreed with Netanyahu, saying there were “no government or opposition” positions on the matter.