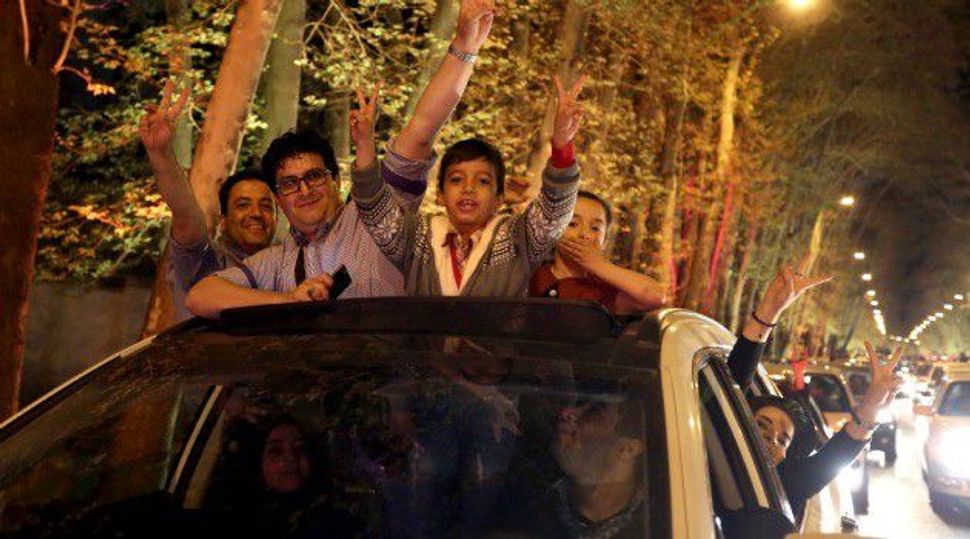 Iran said on Wednesday it would only accept a deal over its contested nuclear program if world powers simultaneously lifted all sanctions imposed on it.

The comments by President Hassan Rouhani came the day after U.S. President Barack Obama was forced to give Congress a say in any future accord – including the right to veto the lifting of sanctions imposed by U.S. lawmakers.

Bolstering the role of a highly assertive Congress injects an element of uncertainty into the crucial final stages of negotiations between major powers and Iran aimed at curbing Tehran’s nuclear ambitions in exchange for sanctions relief.

“If there is no end to sanctions, there will not be an agreement,” Rouhani said in a televised speech in the northern Iranian city of Rasht, echoing remarks made last week by Iran’s most powerful authority, Supreme Leader Ayatollah Ali Khamenei.

“The end of these negotiations and a signed deal must include a declaration of canceling the oppressive sanctions on the great nation of Iran,” said Rouhani, who is widely viewed as a pragmatist.

A tentative deal between Iran and the six world powers was reached in Switzerland on April 2, and aimed at clearing the way for a final settlement on June 30.

Discussions will resume on April 21. However, different interpretations have emerged over what was agreed in the framework, suggesting that nailing down a final agreement will be tough, even without the added complication of Congress.

Many Congressmen have been highly critical of the U.S.-led negotiations, supporting Israel, which has said the framework proposal will not prevent Iran from developing atomic arms. Tehran says its nuclear program is for peaceful purposes.

While Israel said it was pleased with the Congress move, Rouhani said it was a domestic U.S. issue that should have no bearing on the negotiations between Iran, the United States, Germany, France, Britain, Russia and China.

“What the U.S. Senate, Congress and others say is not our problem. We want mutual respect … We are in talks with the major powers and not with the Congress,” Rouhani said.

Looking to reassure his various negotiating partners, U.S. Secretary of State John Kerry said on Wednesday he was confident Obama would be able to get Congress to approve the final deal.

“Looming large is the challenge of finishing the negotiation with Iran over the course of the next two and a half months,” Kerry said after arriving in Germany for a meeting of Group of Seven foreign ministers.

“We are confident about our ability for the president to negotiate an agreement and to do so with the ability to make the world safer,” he added.

Obama has invested enormous political capital throughout his presidency in securing an accord to ensure Iran does not develop a nuclear weapon, relying on tight sanctions that crippled Iran’s economy and forced it to negotiate.

A combination of U.S. and EU sanctions have choked off nearly 1.5 million barrels per day (bpd) of Iranian exports since early 2012, reducing its oil exports by 60 percent to around 1 million barrels a day.

While Iran denies its nuclear program has any military element, it has never welcomed intrusive inspections and has in the past kept some nuclear sites secret.