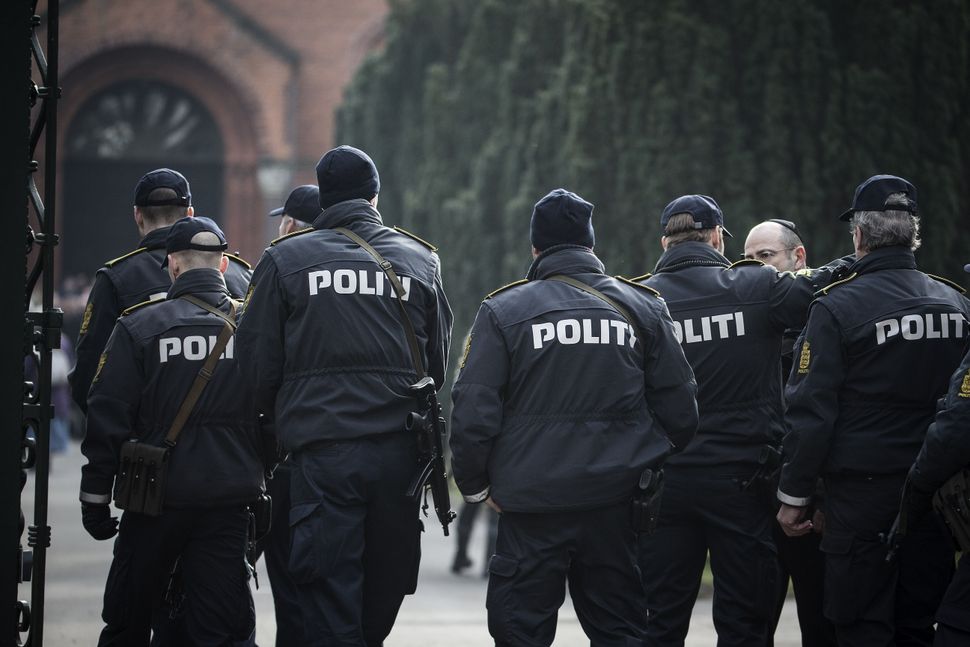 (Reuters) — On Valentine’s Day, two weeks after his release from prison, Omar Abdel Hamid El-Hussein walked up to a Copenhagen cafe hosting a debate on freedom of speech and sprayed it with bullets.

As a manhunt began, the 22-year-old went to ground. Nine hours later he launched a second assault, this time on a synagogue. Police eventually shot him dead, ending a rampage that left Danish filmmaker Finn Noergaard and security guard Dan Uzan dead, and six people wounded.

The attacks on Feb. 14 and 15 shocked Danes, who prize their country’s openness and sense of security. The country was further confounded when it emerged that prison officials had warned Denmark’s domestic intelligence agency that Hussein was at risk of being radicalized. If Denmark’s prison system – famed for its focus on rehabilitation and education over punishment – could not prevent a young man from turning into an Islamist killer, then perhaps it was not the model that many Danes believe it was. Parliament demanded an inquiry into the attacks and how both the prison system and the municipality had handled Hussein’s case.

In interviews with dozens of people, including a former cellmate and a source familiar with the as-yet unpublished official investigation, Reuters has learned new details about Hussein and his final months. His story seems to show how quickly people can be radicalized and how easily they can slip through the net, even a net as supportive and ostensibly secure as Denmark’s.

Those who knew Hussein both inside prison and out say the son of Palestinian immigrants was a violent and troubled 22-year-old, but not a long-term convert to radical Islam. For most of his life he was a rebel without any obvious cause. He drank alcohol, listened to Katy Perry and did not appear very religious.

Such rapid transformations are becoming more common, according to Matthew Levitt, a counter-terrorism and radicalisation expert at the Washington Institute for Near East Policy. Levitt, who last month served as a prosecution witness at the trial of Boston marathon bomber Dzhokhar Tsarnaev, said that the rise of Islamic State means “the pace of radicalisation has gone into hyper-drive. It is no longer a matter of months but of weeks or even days.” Islamic State’s use of social media and the Internet, he said, allows people to quickly learn its extremist doctrines without needing long exposure to its supporters – in prison or elsewhere.

Much is still unknown. Police have arrested five other men. Lawyers say they face a range of charges including suspicion of procuring the weapons and bulletproof vest used by Hussein, and hiding evidence between the two shootings. At the same time, the Danish police have said that there is no indication Hussein was part of a cell or had traveled to Syria or Iraq. Police declined to comment for this story.

Hussein was born in Denmark on Sept. 11, 1992, the elder of two sons. Little is known about his Palestinian-born parents, who have both kept low profiles since the shootings. Danish media have reported that his mother was a biochemist.

Lise Egholm, the head of Hussein’s primary school, said the boy did not get along with other children and that Hussein’s mother grew frustrated by her son’s behavior in primary school.

She said that the family moved to Jordan in 2006 when Hussein was 14. They lived in the north of the country for three years. It is unclear whether Hussein’s father was with them. After the family returned to Denmark in 2009, Hussein’s parents divorced.

At 17, Hussein was arrested for burglary. Over the next few years he was in and out of institutions and prison, with convictions for theft and possession of knives. He became an active Thai boxer for a while and told a court in 2013 that he spent time at a gym.

The young man seemed to waver between a life of crime and an apparent desire for education, work and stability.

“He came across as a sullen, scary and Terminator-ish type,” said Lotte Akiko Nielsen, who taught him English one-to-one at a school in 2012. But once, when she praised his work, he smiled and seemed genuinely surprised, she said. Another time, when a conversation about Nelson Mandela and freedom fighters moved on to the Middle East, he grew enraged.

“Out came a lot of anger. Something had been pent up,” she said. “He was angered by the treatment of people in Palestine, and the injustice he’d seen and heard of in Jordan.”

Nielsen remembers receiving a phone call from Hussein’s mother in 2012. She had been asked to tell the teacher that her son had been sentenced to prison. “He has a good head, but he gets into trouble from time to time,” she told Nielsen.

Hussein’s lawyer told Nielsen it was unlikely the young man would get out of prison in time to sit his exams. But after the exams, as teachers began marking, Hussein ran into the school with a crumpled hand-written synopsis and asked to take his exam belatedly. The school said yes, and Hussein, who talked about prison systems in his oral exam, earned a 12, the top mark, Nielsen said.

Social workers met the young man regularly on behalf of prison officials in 2011 and 2012, and recommended social help for him. Hussein turned it down.

In early 2013, just six months off finishing a two-year higher preparatory examination that would have enabled him to apply for university, he was arrested for stabbing a stranger on a train.

Explaining the stabbing in court, Hussein said he wrongly thought the victim had previously attacked him. He also said he was high and felt angst and paranoia. A court psychiatrist decided he did not need a mental health assessment because “the suspect is found mentally enlightened and no necessity for the suspect to be mentally examined prior to the case ruling is found.”

Sociologist Aydin Soei, who first met Hussein in 2011 when the youth was a member of Brothas, a local gang, speculates that he may have felt lost because he had been thrown out of the gang just before the stabbing. According to Soei, the gang reckoned Hussein was out of control and did not follow gang rules.

KATY PERRY AND A KORAN

In Vestre prison Hussein met Alexander, 20, who was serving time for burglary.

Speaking in a Copenhagen cafe last month during a day release from jail, Alexander said Hussein seemed like a regular, if troubled, young man. He talked about drinking beer, smoking marijuana and girls, Alexander said. He loved Katy Perry’s song “Black Widow,” and would crank up the volume on the radio when it came on.

A prison source confirmed that Alexander and Hussein knew each other in Vestre but officials declined comment, in line with Danish law.

Alexander, who asked that only his first name be used for fear of reprisals from supporters of Hussein, said the young man did not appear overly observant of his Muslim faith. At one point Hussein got a copy of the Koran from the library but did not follow up on a plan to read it with Alexander.

“We were supposed to read it together, but we never got around to it before I was released,” Alexander said.

The one time Hussein did engage on religion was during a discussion about Sunnis and Shi’ites, the two main schools of Islam. “He told me that Shi’ites are responsible for everything wrong with the world,” Alexander said. “That Sunnis are the good ones. That’s the only time he ever raised a finger with religion.

“He didn’t get aggressive, but rather resentful. He turned very serious on this topic, and I felt that this wasn’t something we should discuss. He just had his opinion,” Alexander said.

In January, according to local residents, Hussein moved into a red-brick apartment block in Norrebro, a suburb of Copenhagen. The glass in the main entrance door to the block is cracked and blue paint is flaking on the staircase. But graffiti is rare and the area boasts soccer fields, basketball courts, and climbing frames for children.

In the days before he attacked the cafe and synagogue, Hussein contacted the municipality for help finding permanent housing and a job. He was, it seemed, planning for the future.

Hussein’s father told Danish media he was “as shocked as everyone else,” when he heard the news from the police, though he has declined to comment further.

Former prison mate Alexander was also stunned. “Omar was a good man, and I saw him as a friend. I respected him, and I was shocked and disappointed when I found out … He never talked about shooting innocent people. He never talked about killing cops. We joked about it, as you do in prison. But what happened, I could never have imagined. I still can’t believe he did it.”

When Islamist gunmen attacked the satirical weekly Charlie Hebdo in Paris in January, Yemen-based Al Qaeda in the Arabian Peninsula quickly claimed responsibility for the assault.

There were no such claims after Copenhagen, and police still have no comment on Hussein’s motives.

The April edition of Dabiq, a magazine produced by Sunni militant group Islamic State, carried a story honoring Hussein, but did not take responsibility for his actions. The magazine called him Abu Ramadan Al-Muhajir, and linked him to a Facebook page with that name and a picture of a bare-fanged white wolf as its profile photo.

The Center for Terror Analysis within the Danish Security and Intelligence Service (PET) said in a threat assessment in March that Hussein may have been “motivated by current militant Islamist propaganda issued by IS (Islamic State) and other terror organizations.” PET declined to comment on Hussein for this story. Soon after the attacks, the agency said that the prison service had told it Hussein was at risk of radicalisation. But PET said it had no reason to believe that Hussein was planning an attack.

In all, prison authorities have reported 60 prisoners to PET between the end of 2012 and the middle of March 2015, the Danish Justice minister said in a statement last month. PET estimates that around 115 Danish citizens have traveled to Syria, mostly to fight for Islamic State.

The official investigation found not only that Hussein had started talking about traveling to Syria but that he would grow angry when he saw people wearing skimpy clothing on television. Sixteen days before he was released he assaulted another inmate for no apparent reason, according to the source familiar with the investigation.

Wasseem Hussain, Vestre’s imam, told Reuters that the Danish prison system is built in a way that should curb radicalisation. “We’re not storing people in vast numbers, where they can do what they want.” Wasseem said that guards are encouraged to be friendly rather than intimidating, and prison offers education and help in applying for jobs.

Four days before the shootings, Hussein returned to prison to pick up his belongings. Two days later he missed a scheduled meeting to help find him housing. On Feb. 14 he attacked.

Danish and international media have speculated that Hussein may have come under the sway of Sam Mansour, a Danish-Moroccan serving time in Vestre for inspiring terrorist acts. But Lissi Kristensen, a priest working in Copenhagen prisons including Vestre, said contact between inmates is closely monitored by staff to prevent young men from interacting with known radicals. A lawyer for Mansour and the source close to the investigation said that Mansour had never met Hussein.