Rabbis Speak at Conference on Gays in Orthodoxy 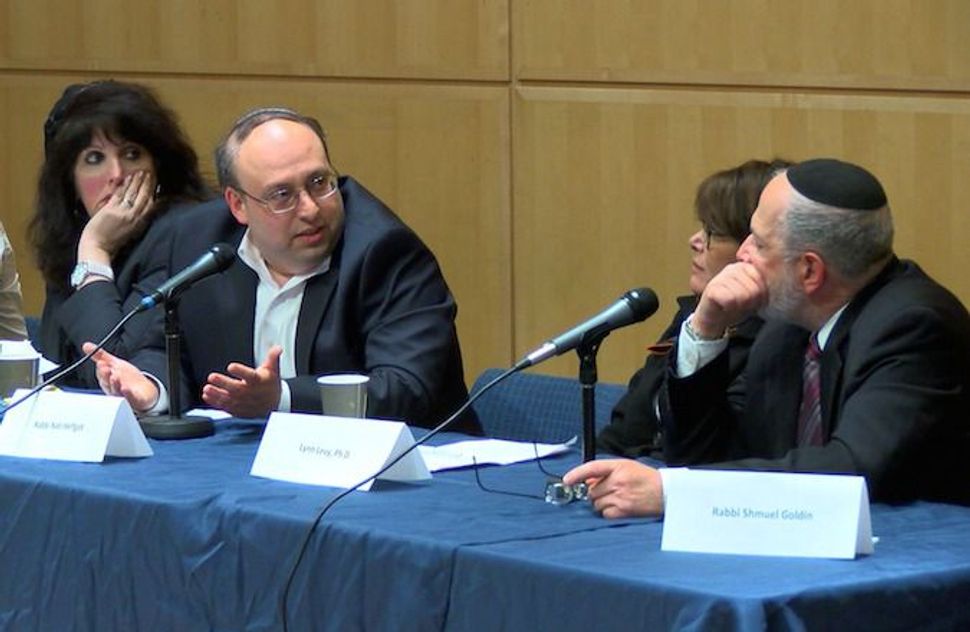 (JTA) — A group of modern Orthodox rabbis have done what advocates for Orthodox gays and lesbians say would have been unthinkable as recently as five years ago: They spoke at a conference on the treatment of gay, lesbian and transgender people in Orthodox communities.

Four prominent Orthodox rabbis participated in Faith, Desire and Pyschotherapy, a conference held April 19 at Columbia University that marked the first time rabbis and mental health researchers engaged in a public discussion about homosexuality and Orthodoxy. A similar discussion was held in 2009 at Yeshiva University without Orthodox rabbinic participation.

“There’s no question this was a huge deal,” said Mordechai Levovitz, the co-founder and executive director of Jewish Queer Youth, which advocates for gay Jews in the Orthodox community and helped coordinate the conference.

Despite recent advances for gays and lesbians in the liberal Jewish denominations, change has come more slowly in the Orthodox community, which maintains that homosexual relationships are prohibited under halacha, or Jewish law. The tension between the limits of Jewish law and the inclusivity sought by gay activists and their supporters was addressed repeatedly at the conference, which drew a crowd of around 120 social workers, therapists, students and rabbis.

“Sometimes the attitude is that if Jewish law is sensitive enough that we can change anything,” said Rabbi Shmuel Goldin, the former president of the centrist Orthodox Rabbinical Council of America. “After all, we’re in a world where we care about people – can’t we just care about people? What that does is it denies the value that is very important to the rabbinic world, which is that there’s inherent value to the system.”

“One of the reasons I personally attended was to learn more about the situation,” Weinreb said. “We’re not ready to endorse any specific program at this point in time, but what we are doing is studying the various programs, especially those programs that help the LGBT person within his family structure.”

In 2010, Helfgot authored a declaration, signed by over 100 Orthodox rabbis, which called for the inclusion of gays as “full members” of the Orthodox community. The statement emphasized that while Jewish law forbids gay sex, it “does not prohibit orientations or feelings of same-sex attraction, and nothing in the Torah devalues the human beings who struggle with them.”

At the conference, that possibility was rejected as dangerous by two mental health professionals: Jack Drescher, who has helped develop the American Psychiatric Association’s positions on sex and gender diagnoses, and Warren Throckmorton, a prominent former supporter of conversion therapy who now condemns it. The RCA once also endorsed conversion therapy, also known as sexual orientation change efforts, or SOCE, but it rejected that approach in 2012.

The rabbis at times betrayed a sense of unease at the conference. Dratch emphasized that he only spoke for himself and not the RCA. Goldin said that he had already received “missives” from “one or two” of his Orthodox colleagues for attending.

“I think that there’s a fear of being labeled by others within the Orthodox community,” Goldin said. “If you open up the door for these types of discussions, how will you as an Orthodox rabbi, as an Orthodox leader, be perceived?”

The conference was more than two years in the making. After Alan Slomowitz, a noted psychologist, discovered two years ago that the only research being done on SOCE in the Jewish community was done by groups which favor the practice, he teamed up with Levovitz and fellow psychologist Allison Feit to plan the conference.

Levovitz does not think that being gay or transgender necessarily conflicts with religious Orthodox principles, or that halacha should be changed. He says that whether a gay person wants to be part of the Orthodox community or not, he or she should be supported and encouraged. The rabbis at the conference largely agreed.

“We try to be as inclusive as possible and that’s the direction that I think we have to go,” Helfgot said. “How do we balance that with not giving a stamp of approval to behavior that we don’t feel we should, but at the same time show love and show that people are fully part of the community? And there’s no one answer.”

Rabbis Speak at Conference on Gays in Orthodoxy