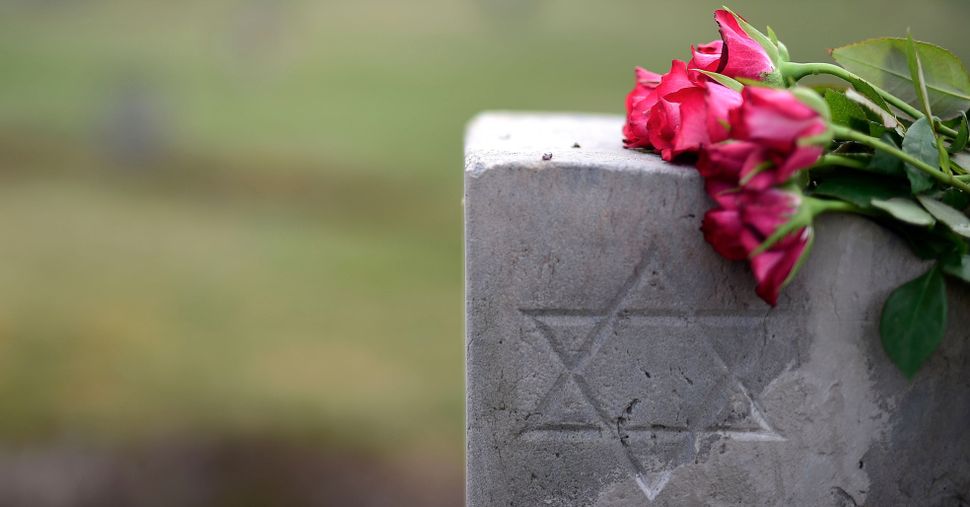 (JTA) — Seventy years after the liberation of the Bergen-Belsen concentration camp by British troops, some 100 people personally touched by the history returned to the site to share their memories and warn against forgetting.

Among them were children born at a displaced persons camp for survivors less than two miles from the camp.

Survivors who recovered started new families: In fact, an estimated 2,000 children were born at the DP camp — the largest in postwar Germany — before it closed in September 1950.

Aviva Tal was one of them. Her parents, who had married before the war but were torn apart and survived several concentration camps, were reunited at the Bergen-Belsen DP camp, where they shared a room with 12 other survivors.

The women “became pregnant right away, including my mother,” a laughing Tal, who was born in February 1947, told JTA. “They put me in a basket in the middle of the room, and I was the most pampered child, always being held. My feet never touched the floor.”

Tal was one of several children of survivors to speak over the weekend at a panel on Holocaust memory led by Menachem Rosensaft, who was born in the DP camp on May 1, 1948. He recently edited a volume of essays, “God, Faith & Identity from the Ashes: Reflections of Children and Grandchildren of Holocaust Survivors.”

Gathering at their hotel in this northwest German city, the participants spoke of growing up with their parents’ stories of survival and of their own responsibility to ensure that others carry on remembering.

A key problem, they said, is keeping the young people interested.

“Jewish kids are getting to the stage where they are saying it’s enough, we are a new generation,” said Maram Stern, deputy executive vice president of the World Jewish Congress, speaking spontaneously to the gathering on Saturday. The son of survivors who settled in postwar Germany, he warned that Germans in general, and their political leaders, “hope that the subject will be over.”

“We won’t let that happen,” responded Julius Meinl, head of the Euro-Asian Jewish Congress, who advocated increased use of films of eyewitness testimony and social media to “keep people on their toes.”

Ehud Bandel, a Conservative rabbi in Israel and founding director of Rabbis for Human Rights, said that while it is essential to remember the Holocaust and fight anti-Semitism, Jews also must fight all forms of persecution.

“We always have to be on guard,” said the child of survivors, “lest we fall into this deadly trap of bigotry and hatred.”

The visitors, most of whom were sponsored by the World Jewish Congress, attended a commemorative ceremony on Sunday at the Bergen-Belsen memorial site about 30 miles from Hanover.

More than 70,000 prisoners, mostly Jews, died at Bergen-Belsen from 1941 to 1945. The camp was liberated on April 15, 1945; some 14,000 former inmates reportedly died after the liberation. The DP camp was established in July 1945 in an emergency hospital set up in a former German army barracks.

“Seventy years ago the world was silent, and now we are standing on one of the largest Jewish cemeteries in the world,” Ronald Lauder, president of the World Jewish Congress, said at the ceremony. “We appear to be descending into the same hell today. Anti-Semitism is rising in Europe, neo-Nazi groups are sitting in Parliament in Hungary and Greece, and Iranian leaders repeatedly promise to wipe Israel from the pages of time. To shout against the past while remaining silent about the present is not just wrong; it is outrageous and immoral.

“From the ashes of this terrible place, the Jewish people rose up and moved on. Today there is a younger generation of Jews committed to making sure the Jewish people never fall victim to this kind of evil again. Just as you never let us down, we will not let you down.”