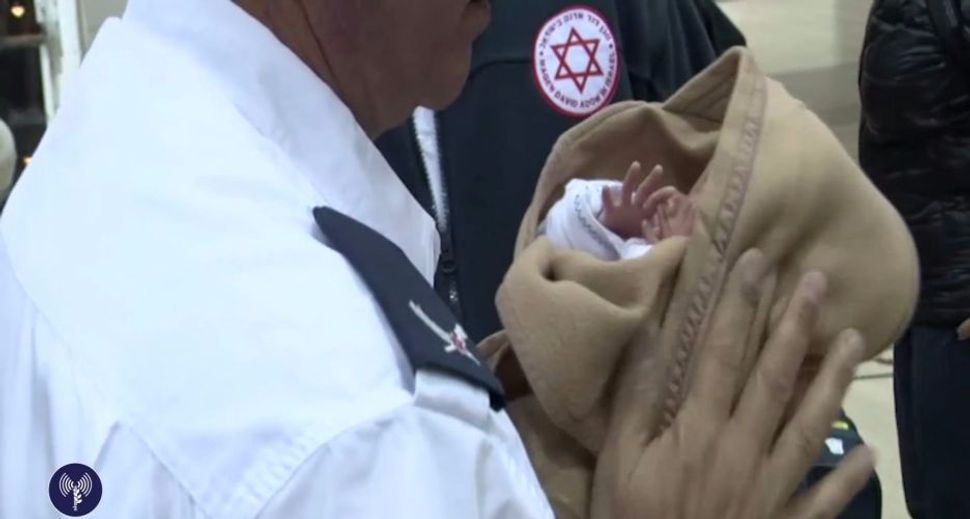 (Reuters) — Israel began evacuating infants born to surrogate mothers and their Israeli parents from Nepal on Monday, on the return legs of flights sent to provide earthquake relief.

Many Israeli male couples have fathered children with the help of surrogate mothers in Nepal because in Israel the procedure is limited by law to heterosexual partners.

Three newborns were ferried to Israel on a small military aircraft that had delivered an advance team of doctors to Nepal to boost rescue efforts after Saturday’s devastating earthquake.

The plane flew home with 11 passengers, and Israel’s Foreign Ministry said preparations were under way to bring another 22 infants, the parents who had traveled to Nepal before the disaster to collect them and four surrogate mothers to Israel on other return flights.

Yossi Filiba, a 44-year-old single father from Tel Aviv, said by telephone from Kathmandu that he had gone to Nepal more than three weeks ago for the birth of his baby girl, Na’ama.

He said he and several Israeli couples and their surrogate babies had found shelter in the ground floor of a building in the capital, and were waiting for the Israeli air force to evacuate them.

“We don’t know when they will get here,” he said. “The water is going to finish and I am with a small baby. There is very little food and no electricity, although sometimes there is a generator.”

Filiba said Israeli parents usually spend a month in Nepal for their child’s birth and to make final arrangements to bring the infant home. The earthquake that hit on Saturday caught Filiba in his apartment, feeding Na’ama.

“I grabbed the baby, ran down three floors and out to open space. All around us, small buildings were collapsing and people were terrified,” he said.

Israel’s military has already dispatched an 80-member search and rescue team to Nepal and planned to send other aircraft with a field hospital and medical personnel later on Monday.

Filiba said the planes could not come soon enough.

Israel’s parliament is considering legislation that would allow same-sex couples and singles to have babies through surrogacy in Israel itself.