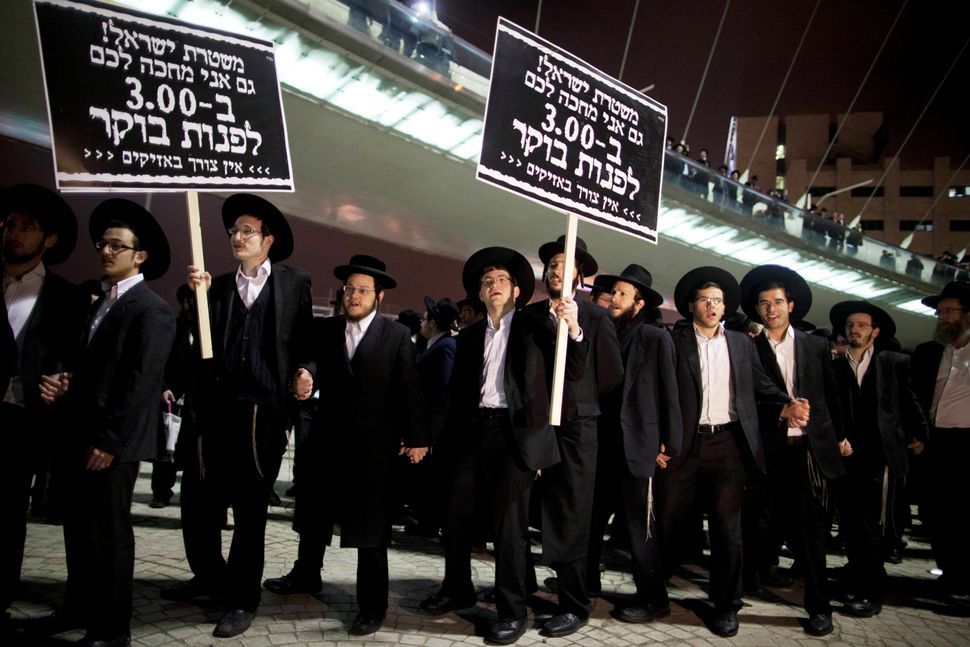 (JTA) — So, the Israel Defense Forces won’t be drafting haredi Orthodox Israelis, after all.

That’s the upshot of a coalition deal Israeli Prime Minister Benjamin Netanyahu will reportedly sign with United Torah Judaism, Israel’s Ashkenazi haredi Orthodox party. The agreement, which Likud and UTJ could ink as soon as Wednesday, would repeal a spate of religion-state reforms enacted as recently as last year.

Those reforms — which affected the IDF draft, conversion, and subsidies to haredim — were the signature achievement of the last government before it crumbled in dysfunction last December. Now, it looks like much of that legacy will disappear.

Chief among the reforms was the so-called “Draft Law,” which expanded the IDF’s mandatory draft to include haredi men. Under the March 2014 law, 24-year-old haredi men would have to serve in the army — although criminal sanctions for draft dodging wouldn’t take effect until 2017. The law aimed to right a historical imbalance in Israeli society. Mandatory military service is a rite of passage in Israel, one from which haredi Israelis had been exempt since the state’s founding in 1948. Many Israelis resented the haredi draft exemption, and the centrist Yesh Atid party based its inaugural 2013 electoral campaign on abolishing it. Yesh Atid Chairman Yair Lapid touted the bill as a realistic compromise that would increase equity in Israel.

But the delay in sanctions made many Israelis skeptical that the law would ever really take effect, even as the number of haredim joining the army rose in 2014. Three years left time for haredim to run in another election and re-enter the governing coalition, where they could roll back the law.

That’s exactly what’s about to happen, according to Israeli reports. As part of its coalition agreement, UTJ is allegedly demanding the removal of any criminal sanctions from the law, taking away its teeth.

The religion-state rollbacks don’t end there. The coalition agreement would also reportedly amend or repeal a landmark law expanding the number of rabbis who can perform conversions, and would increase subsidies to yeshiva students and to large families — many of them haredi — that had been cut in 2013.

Taking to Facebook to decry the repeals, Lapid called the agreement “selling out Zionism.” But because there’s almost no chance he’ll join the coalition, Lapid’s words will have little effect. The agreement would also disregard the 87 percent of Jewish Israelis who wanted a haredi draft, according to a 2011 poll by religious pluralism NGO Hiddush.

Now, those Israelis will have to once again sit tight, waiting for the next election — and the next chance to enact a reform so much of the country desires.