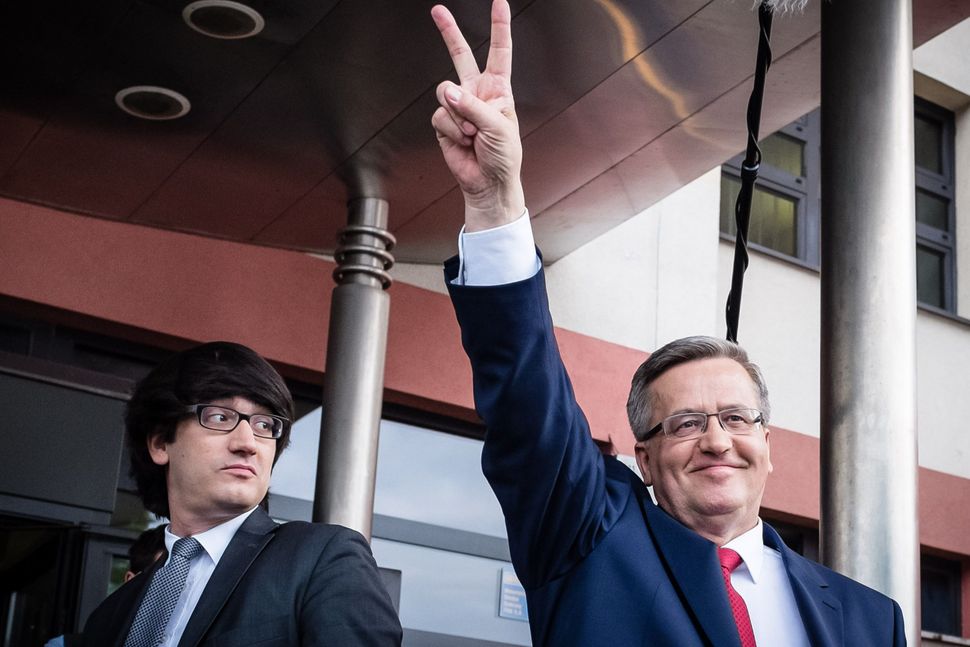 In an election debate, Poland’s president defended his acknowledgment of the complicity of some his countrymen in the Holocaust.

Bronislaw Komorowski offered his defense during a televised debate earlier this week against Andrzej Duda, a conservative candidate who criticized the president’s apologies in recent years for the massacre that Polish farmers perpetrated against their Jewish neighbors at Jedwabne.

The 1941 Jedwabne pogrom, when dozens of Jews were burned alive by villagers who trapped them inside a barn, was exposed in the early 2000s by the historian Jan Gross.

The discovery triggered furious reactions by Polish nationalists who claimed there was too little evidence to support the assertions, which they said falsely depicted Poland as a perpetrator nation instead of a victim of Nazi occupation.

Reiterating his past statements on the subject, Komorwski, 62, said during the debate Sunday: “The nation of victims was also the nation of perpetrators,” according to a translation provided by the AFP news agency.

According to historians, Polish Jews were massacred by their Polish neighbors with little to no German involvement on a number of occasions, including the village of Wasosz, where an archeological excavation is now underway. In at least one incident, Polish villagers killed Jews in a pogrom perpetrated after the Holocaust against Jews who survived it.

“Difficult and painful episodes in our history must not be hidden,” Komorwski, a center-right politician, replied. “Those who do not see them are closing their eyes before historical truth.”

The debate came after Duda clinched 34.76 percent of the vote in the first round of the presidenntial election last week, beating the incumbent by one percent. The second and final round is scheduled to take place Sunday.

Komorwski was widely seen as having won the debate.