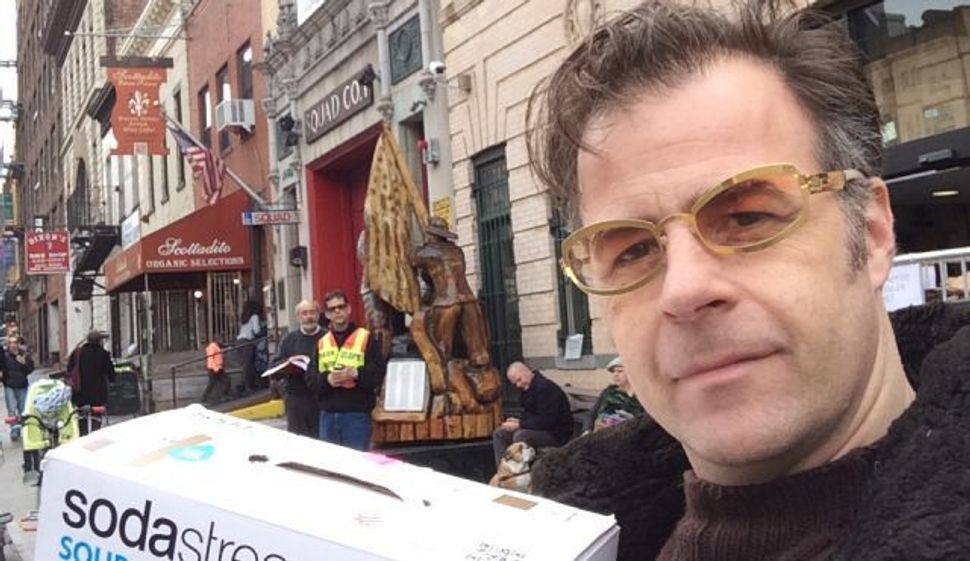 Image by Courtesy of Yoav Gal

With a discussion on boycotting Israeli company SodaStream on the agenda, around 400 members showed up. Boycott advocates began a slide show with pictures of Israeli soldiers intimidating Palestinians. Then a melee broke out, with some co-op members shouting “lies!” Others chanted “let it stay,” and a few eventually rushed the stage to unplug the projector.

The chaos lasted nearly 45 minutes, with co-op leaders repeatedly trying to restore order. In 2012, co-op members voted 1,005 to 653 against holding a membership-wide referendum on boycotting Israeli products. That meeting garnered international attention, and now boycott, divestment and sanctions advocates are bringing the issue to the fore once again.

The Park Slope Food Coop, which last year generated close to $50 million in sales, is one of the largest such entities in the United States. In its newspaper, its letters to the editor arguing for and against boycotting Israeli products are so dominant the paper recently imposed a brief moratorium on their publication.

Leafy, gentrified Park Slope is a famously tolerant Brooklyn neighborhood, but apparently nothing arouses the passions of co-op members as much as boycotting Israel. The April meeting marked the first time in the group’s 42 years that members ever rushed the stage, general manager Joe Holtz said in an interview afterward.

“We’ve never had a big disagreement about whether or not to boycott something before. Ever,” Holtz said. Unlike the deeply divisive question of boycotting Israeli products, other boycott votes have always garnered the support of well over 90 percent of members.

The market has boycotted Coca-Cola products since 2004, over “union-crushing violence conducted by its subsidiaries, especially in Central America,” as well as labor abuses worldwide, according to minutes of general meetings where the corporate giant was discussed.

During the apartheid years the market refused to sell South African products, and in the 1990s it boycotted products made in Colorado after the state passed anti-gay legislation. The co-op also boycotted Flaum Appetizing’s kosher hummus and other spreads, over the Orthodox-owned Brooklyn company’s flouting of labor laws that racked its largely Mexican-immigrant staff. In 2012 Flaum paid more than $500,000 in back wages to settle the issue.

In April, SodaStream finished moving one of its factories from Ma’aleh Adumim in the West Bank to the Negev in Israel proper. But that hasn’t satisfied BDS proponents.

“SodaStream is now moving onto land stolen from Palestinian Bedouins, who are also human beings,” said Anna Baltzer, national organizer of the U.S. Campaign to End the Israeli Occupation, a coalition of 400 local efforts. “We support the rights of indigenous Palestinians inside Israel, including the Bedouins. We can’t end our boycott when SodaStream is simply occupying new land of Palestinians.”

Park Slope isn’t the only American food co-op where boycotting Israeli products is an issue. On May 12, in upstate Ithaca, New York, home to Cornell University, the GreenStar Food Coop’s board voted against holding a membership-wide referendum on a boycott. It did so after being advised by two attorneys that such a policy could contravene the New York State Human Rights Law, “which prohibits companies from participating in boycotts based on national origin,” the board said in a statement.

Ruth Collins, a Cornell cell biology professor, is co-chief of the Ithaca Coalition for Unity and Cooperation in the Middle East, or ICUC-ME, a group formed a few months ago to counter the BDS effort at GreenStar, which was backed by local members of Jewish Voice for Peace.

“BDS promotes conflict, it doesn’t solve conflict,” Collins told Haaretz. While sitting outside GreenStar distributing pro-peace, anti-BDS literature over the past few months, “What became very apparent and surprising was how little nuance there was in the discussion,” she said.

“People would come talk to me in extremist terms. There was really nobody who came up to me who had nuanced criticism of Israel. It was all in extremely vitriolic terms. That makes me realize what a lot of work we have to do to really defang this discussion and make it clear that there are people of goodwill on both sides who want to work together for peace.”

Boycotting Israeli products has also been an issue at food co-ops on the West Coast. In 2010 such an effort was voted down in Davis, California, and in Seattle and Port Townsend, Washington.

In 2011 the food co-op in Olympia, Washington, voted to boycott. Some members, unaware that the issue had been brought to a vote, demanded a new vote in a bid to override the old one.

When that wasn’t allowed, they launched a lawsuit against the co-op’s board for violating its bylaws. The plaintiffs lost and have appealed, said Robert Jacobs, Pacific Northwest director of the pro-Israel group Stand With Us. Washington State’s Supreme Court heard the latest appeal about two months ago and has not yet handed down a decision, he said.

Ann Schneider, a BDS supporter at the Park Slope Food Coop who has not been to Israel or the Palestinian territories, says she supports it because “the issue is just so bloody. I have watched many attacks on Gaza now over the last decade. People are living in a virtual prison. [Last summer] people were told to leave their homes but open fire was permitted on anybody, and I believe children were directly targeted.”

Marion Stein has been a Park Slope Food Coop member for 20 years. At the April meeting, BDS proponents “projected incendiary photographs on the wall,” she told Haaretz afterward. “There was no context, and when they’re displayed twice life-size on a screen, with BDS people presenting their case about all the terrible things SodaStream does, people from our side were incensed.”

As Barbara Mazor, a structural engineer and an organizer of the anti-BDS effort, puts it: “So much of the presentation was either factually wrong, invented, unsubstantiated or incomplete.”

She wrote in an email to Haaretz: “They must have said at four times that Israel steals Palestinian water. In fact, Israel supplies to the PA three times the water amount agreed to in the Oslo Accords, and Israel uses the same water sources as before the Six-Day War, excluding desalination and recycling.”

Yoav Gal, a contemporary classical composer from Rana’ana who now lives in Brooklyn, was among those loudly objecting to the presentation. He has been a food co-op member for about four years.

BDS proponents “were just spewing complete nonsense. It had nothing to do with SodaStream. They started showing unrelated pictures of Palestinian youth being held by Israeli soldiers, the supposedly oppressive Israeli regime,” he said.

“It’s really obvious that what they’re trying to do is demonize the State of Israel. Only against Israel is this acceptable.”

Carol Wald proposed the initial BDS resolution in 2011 and continues to lead Park Slope’s Israel-boycott effort. A clerk at a Manhattan bookstore, she intentionally lives within walking distance of the food co-op.

The 2012 vote against a membership-wide referendum was “a tough fight and a stacked deck,” Wald said. Now, after “45 minutes of pandemonium and an incredibly intimidating atmosphere” at the April membership meeting, “I don’t know how it would be possible to have a free and fair vote” on the question of boycotting Israeli goods.

She declined to share the slide show with a reporter.

“People on both sides are using inflammatory language,” said Wald, who is Jewish. “As soon as I started speaking, someone started shouting ‘liar, propaganda.’ It is so heated, so divisive.”

She said BDS advocates had asked for a meeting with the co-op’s leaders to discuss a way to move forward with the issue. They have also filed disciplinary action “against some of the people who were verbally and physically intimidating to us.”

Holtz, the co-op’s general manager, declined to share his views on an Israel boycott but said: “We have this situation where members really disagree with each other. It’s not good for the co-op.”

Holtz also noted that boycotting SodaStream would conflict with a core food-coop value: environmentalism. “We’ve successfully eliminated well over 1,000 empty bottles [from selling pre-made seltzer] a week. We still sell it, but many members have embraced SodaStream.”

Boycotting Israeli products isn’t on the agenda for the May general meeting set for May 26. But it is sure to come up again soon.

In the meantime, anti-Israel activity at the co-op has only slightly affected member Stein’s enthusiasm for shopping and socializing there. “It’s a very small group of people who are activists on this,” said Stein, a retired Judaica librarian.

But, she said, “You sort of wonder when you’re checking out on line, ‘where does she stand on this?’ Or if somebody looks at me weird, I think of it.”

Stein knows that the co-op’s leadership “has to present as completely neutral, but I know where some people stand. When I see them, it registers in my head. Of course, most people are focused on doing their shopping and getting the hell out of there.”