Israel’s Soccer ‘Win’ May Come With a Nasty Hangover 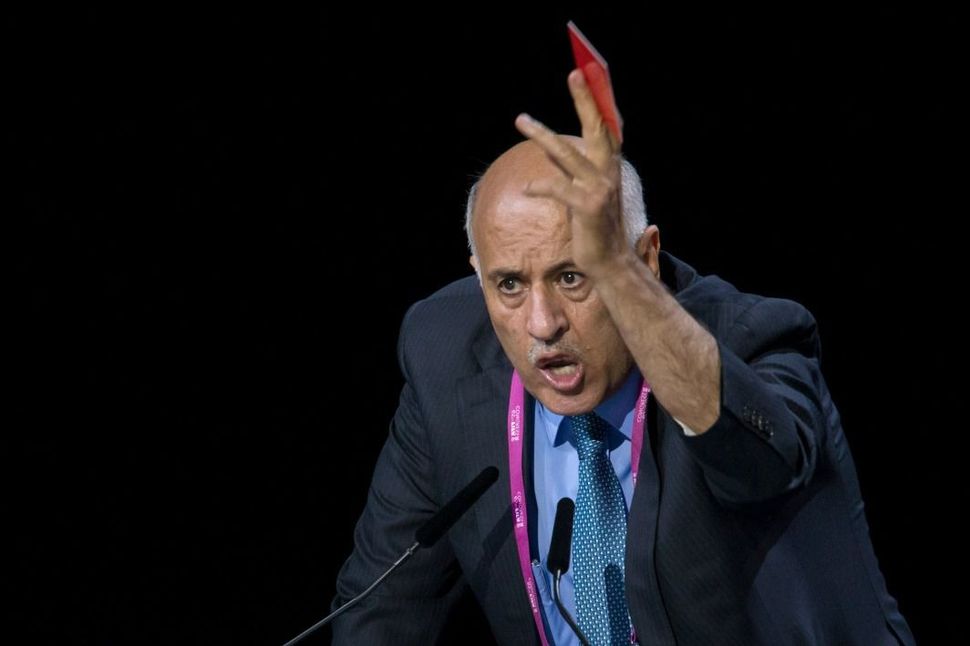 And FIFA President Sepp Blatter, shortly before being reelected to a fifth term in office, unilaterally appointed Sexwale from the podium to head the monitoring committee that will deal with Palestinian grievances, including the demand that five West Bank teams be barred from participating in official Israeli soccer leagues.

In their rush to declare victory following the frustration of Rajoub’s plan to expel Israel outright, most Israeli politicians and analysts seemed to ignore the potential symbolism and irony of putting a prominent anti-apartheid activist to adjudicate Palestinian claims of Israeli racism and discrimination. The lapse is significant in light of the fact that Palestinians and the boycott divestment and sanctions (BDS) movement view the international boycott of apartheid South Africa – in which sports played a pivotal role – as a precedent and inspiration for their own anti-Israeli campaigns.

In fact, though white South Africans were stung far more by subsequent boycotts in rugby, cricket and the Olympics, soccer was one of the first arenas in which non-white South Africa together with the rising Africa-Asian bloc of non-aligned nations scored initial victories against the apartheid regime. FIFA’s first suspension of South Africa in 1961 was temporarily lifted at the behest of Blatter’s apartheid-condoning predecessor, the English Stanley Rous, but was shortly reinstated thereafter until 1976, when the Pretoria regime was expelled altogether following the Soweto Uprisings. South Africa was only reinstated in 1992, after it abolished apartheid.

Sexwale’s role in Israel’s FIFA drama seems far from straightforward. The 62-year-old Soweto-born ANC leader, who spent 13 years alongside Nelson Mandela in the Robben Island prison, is a former provincial premier, presidential candidate and cabinet minister. As head of his own foundation’s Global Watch, dedicated to fighting discrimination in sports, Sexwale recently toured the West Bank together with Rajoub in order to see the plight of Palestinian footballers first hand. But despite the Israeli government’s reluctance to facilitate his visit as well as a reported scuffle with Israeli soldiers in Hebron, Sexwale’s summation was markedly evenhanded: “What we saw in Palestine in relation to what is happening in Israel is shocking. Palestine is a swollen cheek with tears, but so is Israel. They are two cheeks on the same face, and a resolution to the problem has to be found beyond sport.”

Sexwale’s relationship with Blatter himself seems equally complex: In 2011 he helped save Blatter’s career by allowing himself to be photographed with the FIFA president, who was facing harsh criticism at the time after claiming that there was no racism in soccer, and if there was, it could be solved with handshake. More intriguing and current, however, is the fact that Sexwale was a member of the South African organizing committee of the 2010 World Cup that is now figuring prominently in the U.S. indictments of top FIFA officials on charges of corruption. While Sexwale has since assured South Africans that they were justly and legally awarded the right to host the coveted games, speculation is rampant about the identities of “Co-Conspirator #15” and “Co-Conspirator #16”, two “high-ranking South African football and government officials” who are suspected of offering cash for votes in order to make sure the World Cup was held in South Africa.

According to the indictments, the two suspects served on both the 2010 World Cup organizing committee and on the 2006 South African World Cup bid committee. The reports in South Africa suggest there are only two other officials, in addition to Sexwale, who fit the bill.

Sexwale also has another Israeli connection: according to press reports, he made a fortune at one time in the diamond and mining business and was involved in a convoluted joint venture in the Congo with controversial Israeli billionaire Dan Gertler, who has himself been at the focus of several criminal inquiries, including those related to former Israeli Foreign Minister Avigdor Lieberman. And his financial records have now been subpoenaed by his one time advocate and subsequent wife, with whom he is now embroiled in a widely covered and messy divorce.

Though most historians dispute the narrative that economic sanctions “brought South Africa to its knees,” as its proponents claimed, no one denies the devastating influence of the boycott in sports on the white public’s morale: In a 1977 poll, white South Africans listed the lack of international sports as one of the three most damaging aspects of apartheid. Sports are important everywhere, of course, but in mid-20th century South Africa, as in Australia and New Zealand at the time, they often attained a semi-religious status. In apartheid South Africa, the all-white teams were a source of national pride and racial defiance.

Throughout its 30-year battle to maintain racially pure squads, the South African government used a slogan frequently uttered by Israeli officials and their FIFA defenders in recent days: “Keep politics out of sports.” Their non-white challengers, also South African, countered with a slogan that Palestinians have also adapted and adopted as their own: “No normal sports in an abnormal society.”

Of course, despite the efforts of BDS supporters to draw a direct analogy between the two, Israel’s policy towards the Palestinians, arguable immorality notwithstanding, is no successor to South Africa’s racially motivated white supremacist regime. In fact, without detracting in any way from the existence of rampant racism in Israeli soccer in general and in teams like Beitar Jerusalem in particular, Israeli Jews and Arabs probably mix and collaborate in the Israeli football leagues more than they do in most other sectors of society. And while countless Israelis are soccer crazy, sports in Israel is viewed as no more than a hobby, as its international results attest. If FIFA had expelled Israel on Friday it would have dealt a stinging blow to Israel’s national pride, not necessarily to its sporting convictions.

Nonetheless, the fear that Israel has reached the point that expulsion by FIFA seemed possible if not imminent is an ominous harbinger of things to come. As the South African precedent proves, sporting arenas offer infinite possibilities for activists to hassle Israel and its teams, in professional associations, official tournaments and bilateral matches, both official and friendly.

Israelis have conveniently forgotten that their national soccer teams had already been placed in unofficial quarantine in the Asian arena after the 1973 Yom Kippur War and were only accepted to Europe’s UEFA soccer group in 1994 in the wake of the goodwill generated by the previous year’s Oslo Accords. With the current government’s record on peacemaking and general popularity, however, the credit accrued then seems to have finally run out.

Israel’s Soccer ‘Win’ May Come With a Nasty Hangover