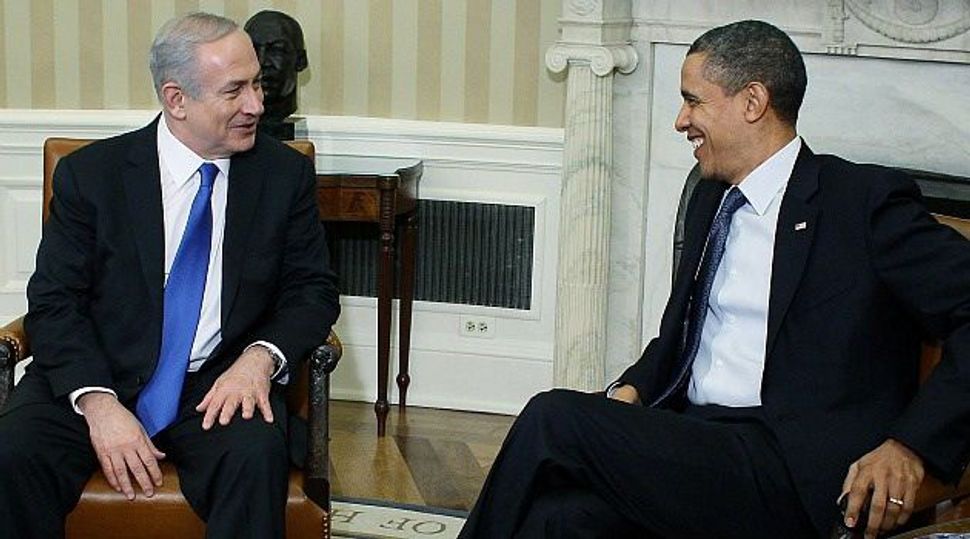 (JTA) — When David Axelrod, then a senior adviser to President Barack Obama, first learned that Israeli Prime Minister Benjamin Netanyahu reportedly had referred to him and White House Chief of Staff Rahm Emanuel as “self-hating Jews,” he remembers feeling stung.

“For people to suggest that I would be anti-Israel or worse, anti-Semitic – it hurts,” Axelrod recalled of the 2009 episode.

Robert Wexler, the former Florida congressman who was Obama’s Jewish community liaison in the 2008 and 2012 elections, remembers his own “uh-oh moment” with Netanyahu.

It was in May 2011, when Netanyahu, irritated by Obama’s call for an Israeli-Palestinian peace deal based on the 1967 lines, decided to use an Oval Office photo opportunity to publicly lecture Obama on Middle East history.

“I was embarrassed, as an American, that an American president is forced to sit and listen to a reciting of a point of view,” Wexler said. “Had Prime Minister Netanyahu been the prime minister of probably any other nation on earth, the president would have gotten out of his chair and walked away.”

The interviews with Axelrod and Wexler are part of a series of recent conversations with top figures in the Obama camp, including the president himself, that offer new details about the breakdown in the relationship between the U.S. president and the Israeli prime minister – and lay bare just how troubled that relationship has become.

The interviews were conducted by Ilana Dayan, who hosts the newsmagazine show “Uvda,” Israel’s version of “60 Minutes,” and were organized in part by JTA, which was present for most of the interviews. The first segment aired Monday on Israel’s Channel Two; the second, consisting of the interview with Obama, was scheduled for Tuesday evening.

The “Uvda” interviews included few Netanyahu defenders, and the program was devoted mostly to criticism of Netanyahu’s approach to U.S.-Israel relations. The material cited in this story includes both remarks that aired on the program and parts of the interviews that did not make it into the broadcast.

“The trust is gone on both sides; there’s too much water under the bridge between those two leaders now,” said interviewee Martin Indyk, who served as the administration’s special envoy for Israeli-Palestinian peace in 2013 and 2014.

“It’s that mutual lack of trust which has poisoned the relationships,” Indyk said.

Indyk did not lay all the blame on Netanyahu, saying Obama committed the original sin by leaving Israel out of his first multi-day trip to the Middle East as president, when he visited Cairo and Saudi Arabia in June 2009.

“He reached out to the Arab and Muslim world and then he didn’t go to Israel. That was the original miscalculation,” Indyk said. “He lost them there and he never got them back. It sent a message that he didn’t like them that much, that he wanted to put some distance between the United States and Israel.”

For their part, Israeli government officials say Netanyahu’s stance toward Obama is all about policy, not personality, and that his No. 1 concern is ensuring Israel’s security – even if it means ruffling feathers with the president. They say Netanyahu will not hold back about expressing his concerns with U.S. policies he believes do not account for the brutal realities of the Middle East – especially the looming deal with Iran, which Netanyahu says will leave Israel’s most strident enemy on the threshold of a nuclear weapon.

In his interview with “Uvda,” which is scheduled to air late Tuesday, Obama said, “The best way to prevent Iran from having a nuclear weapon is a verifiable tough agreement. A military solution will not fix it, even if the United States participates.”

Indyk said Obama feels hurt by the way he is portrayed in Israel.

“He’s deeply offended by the notion that he’s anti-Israel or anti-Semitic,” Indyk said. “He’s hurt by it now. It’s finally got to him, the ingratitude of Israelis to this president.”

Other interviewees included media personalities such as Jeffrey Goldberg of the Atlantic and David Remnick of The New Yorker; U.S.-Israeli businessman Haim Saban, an Obama confidant; Alan Solow, a top Chicago backer of Obama since the 1990s, when he chaired the Conference of Presidents of Major American Jewish Organizations; Rep. Nita Lowey of New York, the top Democrat on the powerful U.S. House of Representatives Appropriations Committee; and Netanyahu confidant Dore Gold, who was recently named the director general of Israel’s Foreign Ministry.

Saban described the relationship between Netanyahu and Obama as like “oil and water” and said the crisis in relations is not in the future; it is here already. In a recent private meeting with the president, Saban noted, Obama described the Palestinians as “oppressed people in occupied territories.”

The “Uvda” program identified several key low points in the Obama-Netanyahu relationship: Netanyahu’s Oval Office “lecture” to Obama in May 2011; Netanyahu’s embrace of Mitt Romney during the 2012 U.S. election campaign; and Netanyahu’s speech to Congress in March, which Netanyahu and Republican leaders scheduled without the White House’s knowledge and went ahead with over the objections of administration officials.

Interviewees also cited Netanyahu’s warnings on Election Day in March about Arab voters going to the polls in “droves” and late in the campaign about the impracticality of the two-state solution as further undercutting trust between the two leaders.

Lowey said she agreed with much of the skepticism expressed by Netanyahu over the Iran deal in his speech to Congress and has asked the White House to tamp down the tensions with Israel.

“I told the White House to dial it down,” the veteran congresswoman said.

But she, too, expressed frustrations with Netanyahu. Lowey recalled a call with the prime minister on a Friday in February during which she offered to set up a private briefing with Congress to replace the public speech because tensions over the address were undercutting the U.S.-Israel relationship.

“I said to Bibi, call within an hour because I knew we were approaching Shabbat,” Lowey said. “I’m still waiting for the return phone call.”

Solow and others suggested that Netanyahu made a political calculation early on to play rough with Obama, figuring it would serve him well politically at home.

“He was going to make sure that for political purposes in Israel that he was characterized as somebody who was a strong defender of Israel against a president with whom he knew he was going to have some substantive disagreements,” Solow said of Netanyahu.

Indyk said Netanyahu has taken a highly risky gamble by ringing the alarm bell on Iran in a manner that has come at the expense of the U.S.-Israel relationship.

“If Israel is really threatened by Iran, then he should be doing things that ensure Israel’s security, starting with making sure the U.S.-Israel relationship is on solid ground,” Indyk said of Netanyahu. “He should read the map, because if he’s not going to succeed it will have screwed up the relationship between the United States and Israel, opened up a gap between Israel and its most important friend and most important strategic ally — its force multiplier, its greatest deterrent.”