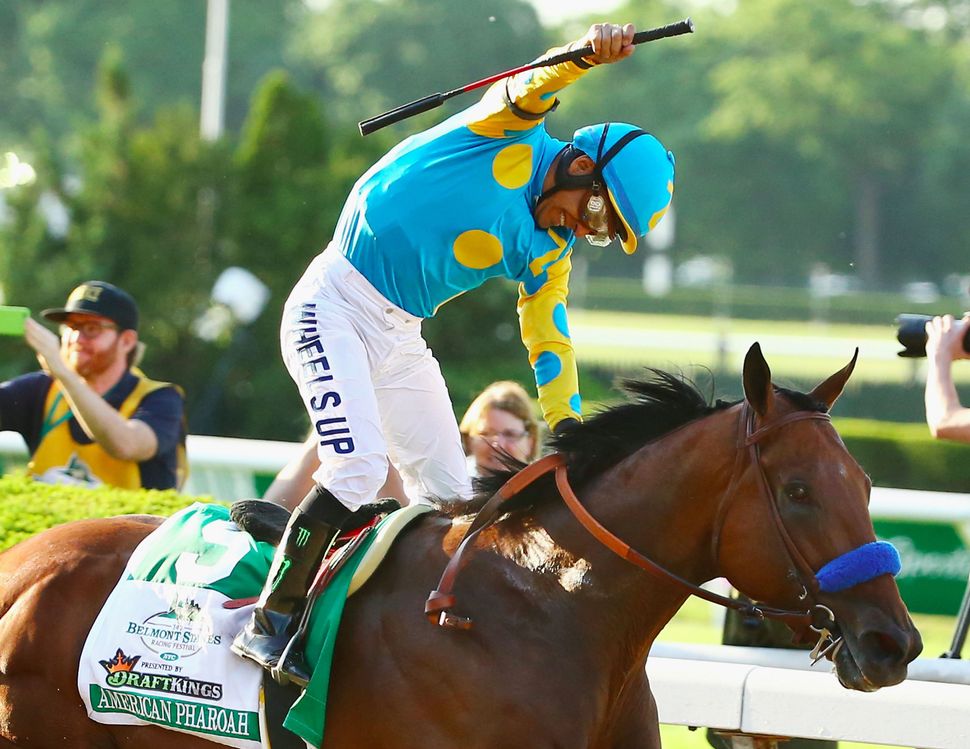 American Pharoah raced to victory on Saturday in the Belmont Stakes, the first horse to win the Belmont, the Kentucky Derby and the Preakness since Affirmed in 1978.

Owner Ahmed Zayat, 52, a resident of Teaneck, New Jersey who was born and grew up in Cairo, said after the race “We all wanted it. We wanted it for the sport,” according to the Associated Press.

Zayat had watched horses he owned finish second in the Kentucky Derby three out of the last four years. In 2012, horses owned by Zayat finished second in each of the three Triple Crown races. Zayat, who breeds and sells horses, currently owns 144 horses.

Zayat and his family slept in RVs on Friday night and walked to the track on Saturday, in order to observe Shabbat, according to AP.

Jockey Victor Espinoza, who is not Jewish, visited the Lubavitcher Rebbe’s grave on Thursday in Cambria Heights, New York, in the borough of Queens, where he prayed and presumably asked for good luck.

As he crossed the finish line, Espinoza pumped his fist as the crowd of 90,000 at sold-out Belmont Park roared.

Fans raised their arms in delight, with scores taking pictures to capture one of the rarest moments in sports.

Espinoza, who failed twice before to win the Triple Crown by losing the Belmont Stakes, did not have to wait long before knowing the third time would be the charm.

“I’m telling you at the first turn, that was the best feeling I ever had,” he said. “The way he runs and stretches legs, and the way he hits the ground, it doesn’t feel like you’re going that fast. It feels like he’s in slow motion.”

The victory secured American Pharoah trainer Bob Baffert’s first Triple Crown after the Hall of Famer was denied three previous times at the Belmont Stakes, with Silver Charm in 1997, Real Quiet in 1998 and War Emblem in 2002.

“I was prepared for somebody coming (in the stretch) because I’ve gone through this so many times,” said Baffert. But, he added, at the eighth pole: “I knew he was going to do it.”

“All I did was take in the crowd,” he said. “The crowd was thundering. I was just enjoying the call and the crowd, the noise.”

American Pharoah held a two-length lead over Frosted at the top of the stretch before widening it out and winning easily.

“It’s exciting because we have not seen this for so long,” Frosted jockey Joel Rosario said. “The winner really looked brilliant.”

Prior to American Pharoah’s victory in the eight-horse field on Saturday, 13 horses since Affirmed’s 1978 Triple Crown had triumphed in the Kentucky Derby and Preakness but failed to win the Belmont, the longest and most demanding of the three races.

“I wasn’t as nervous as I usually am before these because I really felt I had the horse,” said Baffert. “When I saddled him I could tell. I told Victor in the paddock, ‘Dude, he is ready, ride him with confidence.’ And he did.”

American Pharoah won the May 2 Derby by a length and two weeks later claimed the Preakness Stakes by a jaw-dropping seven lengths in a driving rainstorm.

He was the only horse to run in all three of the Triple Crown races this year. The bay colt’s owner, Zayat, said he would like to keep the sport’s newest rock star on the track through the end of the year.

“We would like to enjoy him as long as we can,” he said. “I personally made a promise to my family and to the fans — we need to enjoy our stars and race them as long as we possibly could.”

“Thirty-seven years we’ve waited for this,” said Baffert. “What a feeling. It’s probably going to take a few days to sink in.”