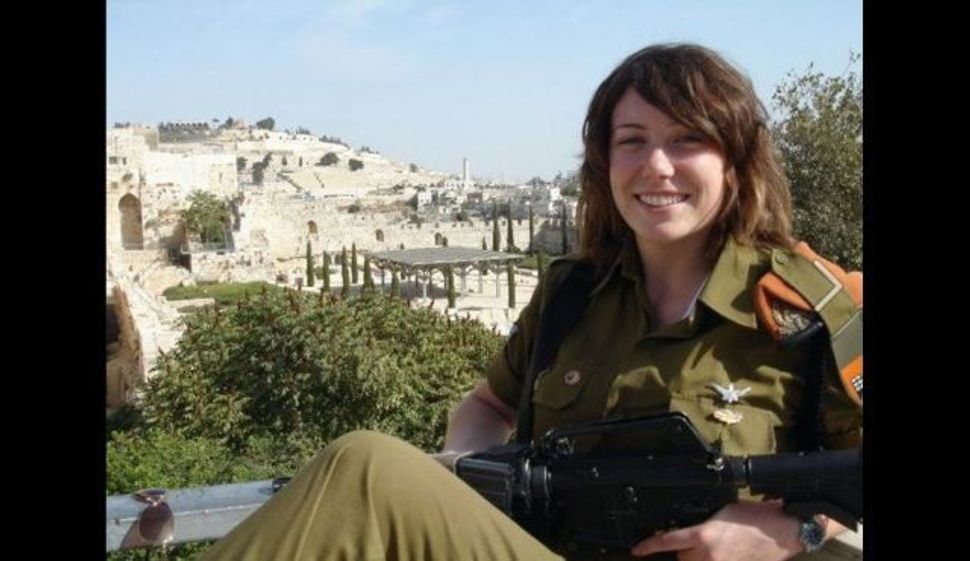 A Canadian-Israeli who was the first foreign woman to help the Kurds in their fight against Islamic State said on Monday that she had volunteered in an effort to “turn her life around” after being jailed in the United States for an international phone scam.

Having spent eight months with Kurdish YGP guerrillas in Syria and the Dwekh Nawsha, an Christian militia in Iraq, Gill Rosenberg returned on Sunday to Israel, where she was feted by local media but may have to answer for her unauthorized travel.

The 31-year-old former Israeli army volunteer said the lessons of the Holocaust drove her to help protect the Kurds and other Middle East minorities menaced by Islamic State advances.

“I think we as Jews, we say ‘never again’ for the Shoah, and I take it to mean not just for Jewish people, but for anyone, for any human being, especially a helpless woman or child in Syria or Iraq,” Rosenberg told Israel’s Army Radio on Monday.

Yet in a separate interview, she spoke of a need to atone for her role in an Israel-based phone-scam ring that the FBI said had targeted mostly elderly Americans and over which she was arrested in 2009 and extradited for trial in a U.S. court.

“I was young and stupid and, you know, did something I shouldn’t have … and, you know, spent four and half years in jail for it, and wanted to turn my life around and do something good for a change,” Rosenberg, fighting back tears, told Israel’s Channel Two television.

“For me, it was kind of like seeking redemption, or something, for my past.”

Rosenberg’s legal troubles may not be over.

Yahel Ben-Oved, one of her lawyers in the phone-scam extradition, said Rosenberg won early release from prison on condition she remain paroled either on U.S. or Israeli soil.

“I believe she may have violated this by going to Syria,” Ben-Oved told Reuters. “This could be a problem for her.”

U.S. officials said they were looking into the case. Rosenberg declined a Reuters request for an interview, saying she would speak to foreign media later in the week.

On landing at Tel Aviv airport, Rosenberg was questioned by the Shin Bet, the Israeli security agency said. Israel bars its citizens from traveling to Iraq or Syria, both designated as enemy countries. But an Israeli justice official told Reuters on condition of anonymity it looked unlikely she would be charged.

Rosenberg’s native Canada, from which she emigrated alone to Israel, had also urged her to get out of Syria. Canadian officials did not immediately comment on her return.

Speaking on Army Radio, Rosenberg said she had taken part in “some pretty major firefights” with Islamic State insurgents holding lines just 2 km (1 mile) away from her positions.

“But in the past few weeks I think a lot of the dynamics have changed there, in terms of what’s going on in the war,” she said. “The Iranian involvement is a lot more pronounced. Things changed enough that I felt that it was time to come home.”

Iran, Israel’s arch-foe, backs Shi’ite militia that have led much of the fighting against Islamic State in Iraq over the last year. It also supports Syrian President Bashar al-Assad, who has lost swathes of eastern Syria to Islamic State.

Kurdish sources confirmed Rosenberg’s service with YPG to a Reuters correspondent who also met her at a Dwekh Nawsha base. Photos she shared on Facebook showed her holding a rifle at a lookout post and, in battle gear, guarding a group of prisoners.

“She is a trained fighter with capabilities. She was not afraid,” Dwekh Nawsha spokesman Albert Kisso said on Monday.