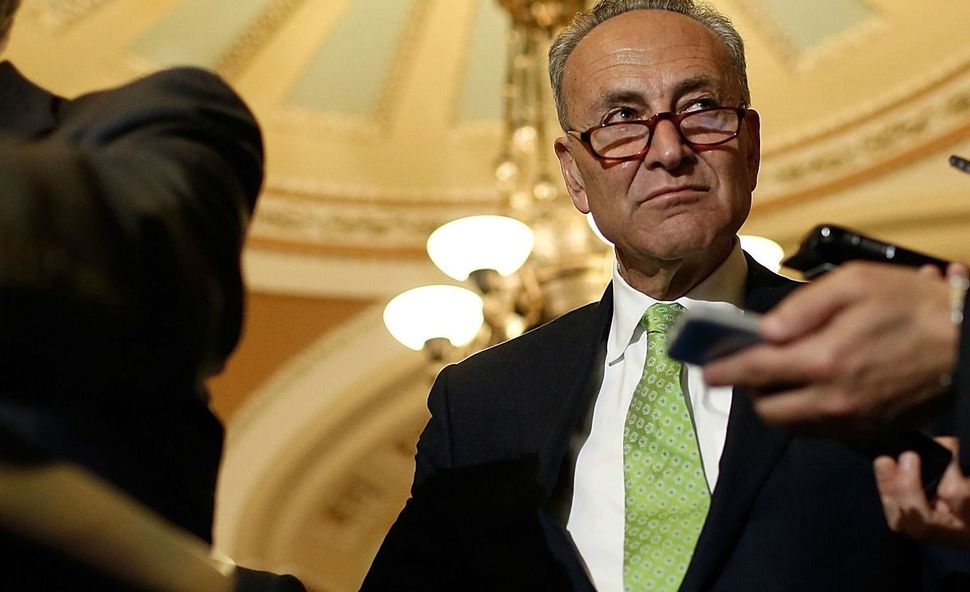 (JTA) — The dredging up of the dual loyalty charge — that lawmakers who reject the Iran nuclear agreement and the American Israel Public Affairs Committee, which is lobbying against it, are more closely aligned with Israel than the United States — illustrates just how tense the debate over the deal has become.

The charge came to the fore after Sen. Charles Schumer, D-N.Y., the highest-ranking Jewish Democrat in the Senate, announced last week that he was opposing the deal reached July 14 between Iran and six world powers. A weekly cartoon on Daily Kos, a liberal website, depicted Schumer as a woodchuck, and in the course of a TV interview, the flag in the woodchuck’s office changes from American to Israeli and the moderator, a basset hound, calls Schumer a traitor. The cartoonist, Eric Lewis, has had drawings published in the New Yorker.

The cartoon has drawn outraged responses.

“There is room for a legitimate debate on the Iran deal, however charges” of disloyalty “against Senator Schumer — and any other members who articulate on fact-based but alternative views — are beyond inappropriate,” Jonathan Greenblatt, the new national director of the Anti-Defamation League, told the Times of Israel.

With most Republicans against the deal, Democrats have become the battleground — and Schumer has been under especially intense scrutiny. Congress has until late September to decide whether to reject the agreement.

The Democratic caucus generally defers to those within the party with the biggest stake in an issue, and traditionally has looked to its Jewish caucus, some 27 members, for leadership on Israel-related issues. Six have declared against the deal and 10 have declared for it. But Schumer’s coming out in opposition was seen as a watershed because he is line to succeed Sen. Harry Reid, D-Nev., the party’s leader in the Senate who is retiring next year.

MoveOn, the liberal activist group, immediately launched a drive to defund Schumer, headlining one email to supporters, “Unbelievable. Schumer. War.” In an interview, Ilya Sheyman, MoveOn’s executive director, repudiated anti-Semitism in the debate, but said likening Schumer to those who want war was justified. Sheyman, who is Jewish, said Schumer’s Jewishness was not a factor in the MoveOn campaign.

“Part of the reason you’re seeing this is Chuck Schumer is the first and so far only Senate Democrat to come out against the deal and he is likely to be the next leader,” Sheyman said. (Sen. Robert Menendez, D-N.J., has indicated he will oppose the deal but has yet to formally declare.) “Siding with those who would take us into another war in the Middle East is not a comfortable path to be on.”

U.S. Sen. Chuck Schumer (D-NY) speaking at New York University on August 11, 2015. (Andrew Burton/Getty Images) Sen. Charles Schumer speaking at New York University, Aug. 11, 2015. The New York Democrat was called a traitor in one cartoon after coming out against the Iran nuclear deal. (Andrew Burton/Getty Images) AIPAC’s president, Robert Cohen, on Monday in an email to supporters pushed back against what he said were the Obama administration’s misrepresentations of his pro-Israel lobbying group’s policy.

The differences arose last week in an exchange between Lee Rosenberg, an Obama backer and a past AIPAC president, and Obama at a meeting the president convened with Jewish leaders at the White House. At the meeting, attendees said, Obama noted TV ads paid for by an affiliate of AIPAC, Citizens for a Nuclear Free Iran, and appeared to conflate them with other ads that liken Obama to Neville Chamberlain, the British prime minister widely seen as having appeased Hitler.

The CNFI ad addresses the substance of the deal and “does not single out the president in any way,” Cohen said in the email.

Online, some Obama critics lost no time in drawing a line between the Daily Kos cartoon and Obama’s rhetoric defending the deal.

A number of conservative commentators had already said that Obama was insinuating anti-Semitic tropes about dual loyalty in addresses he has delivered defending the deal.

Elliott Abrams, a deputy national security adviser under Bush who is now a fellow at the Council on Foreign Relations, said Obama in an Aug. 5 address at American University insinuated that AIPAC and other Jewish groups are counseling war with Iran.

Writing in the conservative Weekly Standard, Abrams quoted Obama from the speech: “Does anyone really doubt that the same voices now raised against this deal will be demanding that whoever is president bomb those nuclear facilities?” Obama asked.

“Who are these people who will be ‘demanding’ war?” Abrams wrote, and then said Obama was referring to AIPAC “and Jewish members of Congress like Chuck Schumer and Eliot Engel and Ted Deutch.”

Obama in his speech at American did say that “many of the same people who argued for the war in Iraq are now making the case against the Iran nuclear deal.” Yet he also explicitly distinguished opponents whose skepticism for the deal stems from support for Israel from Republican partisans, whom he accused of beating the drums for war, and he expressed sympathy for the pro-Israel outlook.

“I do think it is important to acknowledge another more understandable motivation behind the opposition to this deal, or at least skepticism to this deal,” he said, “and that is a sincere affinity for our friend and ally Israel. An affinity that, as someone who has been a stalwart friend to Israel throughout my career, I deeply share.”

Notably, the distinction between pro-Israel and partisan Republican opposition to the deal came a day after the White House meeting with Jewish leaders. Those attending the meeting said Obama had agreed to make the distinction clear going forward.