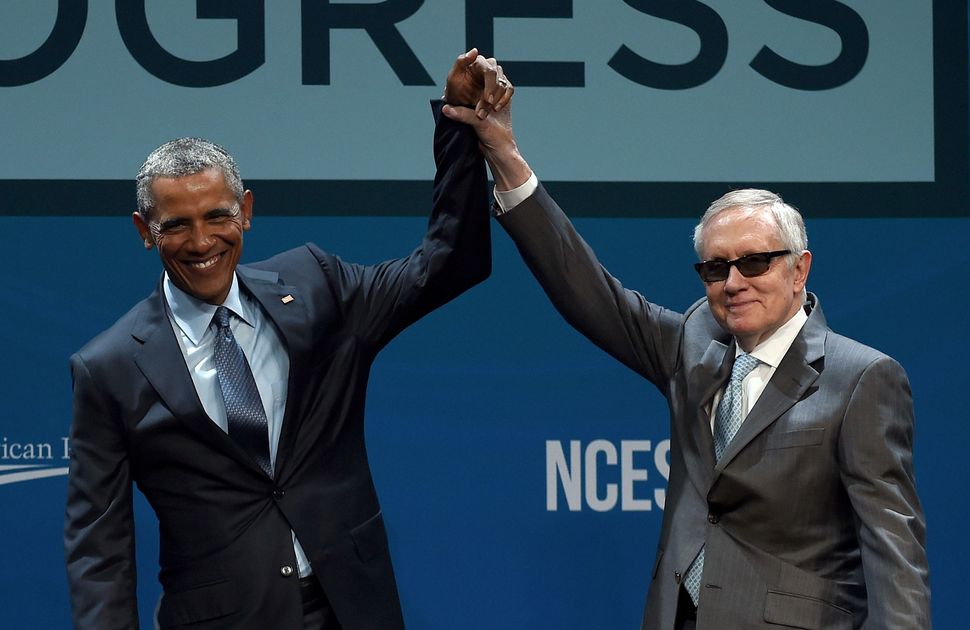 Democrats are confident they will have enough votes to protect the Iran nuclear deal in the U.S. Congress, but they face an uphill task to avoid President Barack Obama having to use his veto power to ensure the agreement’s survival.

“We’re getting close,” said Senator Richard Durbin, who as Minority Whip is the Democrats’ chief vote counter in the Senate, referring to the 34 Senate votes needed to sustain an Obama veto if Congress initially rejects the deal.

“I have really been heartened by the positive response from our caucus,” he told Reuters on Thursday.

Obama will be able to save the agreement if he can deny opponents in either the Senate or the House of Representatives the two-thirds majority needed to override his expected veto.

Senate aides said they expected to reach that threshold before Congress returns from recess on Sept. 8, ahead of a vote on the deal which must take place before Sept 17.

But achieving the 41 Senate votes needed to block an expected “resolution of disapproval” of the deal by the Republican majority – avoiding the need for a veto – remains in doubt, they acknowledged.

The distinction is viewed as crucial by the White House and other backers of the controversial accord, which gives sanctions relief to Iran in exchange for curbs on its nuclear program.

If Obama has to use his promised veto, it would undercut his ability to claim broad political backing for the deal agreed by six major powers and Iran. The appearance of more unity would strengthen the international community’s hand in forcing Iran to comply with the nuclear agreement, backers say.

A Reuters poll released on Thursday underlined the growing partisan divisions over the deal, with 54 percent of Republican supporters opposing it, up from 30 percent in April. Only 16 percent of Democrat respondents oppose the deal.

Twenty-seven Senate Democrats and two independents have announced support for the agreement, which was reached in mid-July and which Republicans say will empower Iran without effectively blocking its path to a nuclear weapon.

With more Democrats expected to come out in favor within days, the White House is edging toward the 34 Senate votes needed to sustain Obama’s veto and preserve his top foreign policy achievement from collapse.

IS A VETO AVOIDABLE?

Growing support for the deal has led to speculation that Democrats are approaching the 41 votes they would need under procedural rules to block a disapproval resolution in the Senate and keep it from reaching Obama’s desk.

To reach 41 votes, 12 of the 15 undecided Senate Democrats would have to support a motion blocking it. Senior Democratic aides said they do not yet have that many votes even in their private “likely yes” columns.

“The last 10 percent is always the hardest,” a Senate Democratic leadership aide said.

One pro-deal group tracking the vote said it was confident of only about six or seven of the 15 remaining undecided Democrats eventually backing the deal.

Obama has lobbied heavily for the deal and an aide said Durbin had called undecided Democrats every day during Congress’ four-week summer recess. Progressive groups have lobbied intensely for the agreement, promising to block donations to any “war hawk” who opposes it.

Opponents have spent millions on advertisements. Republican leaders, powerful pro-Israel groups and Israeli Prime Minister Benjamin Netanyahu himself denounce the deal, which Netanyahu calls a threat to his country’s survival.

The White House has declined to comment on its outlook beyond saying it is working to gather enough votes to keep Congress from “spoiling” the pact.

Obama’s veto would be only the fifth of his presidency. Congress has failed to override any of the other four. Overrides are rare, blocking only 110 out of the 2,566 vetoes in the history of the United States.

So far, only 78 House members, all Democrats, support the deal, according to a count by the Bipartisan Policy Center. No Republican has yet backed the agreement.