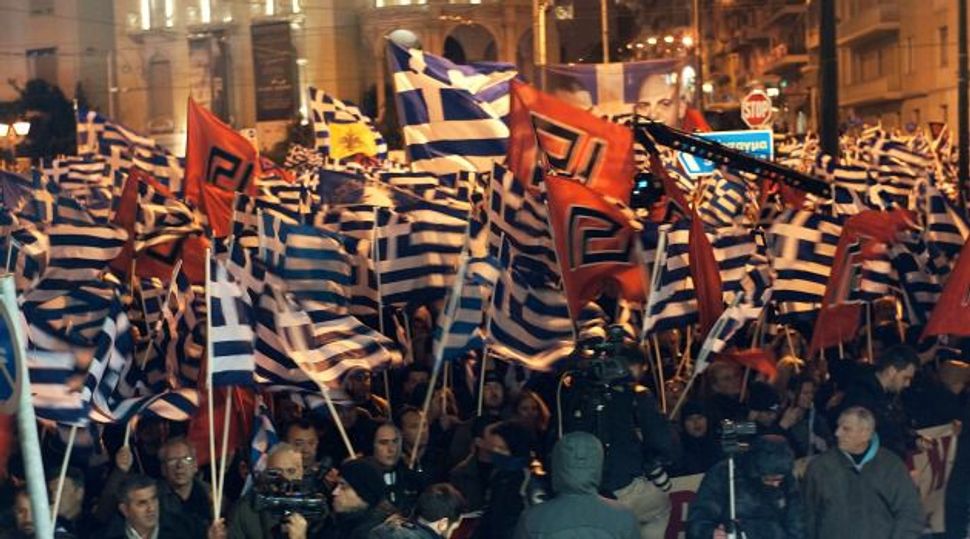 Three fresh-faced children appear on the TV screen and, to the sound of kiddie piano music, declare that they want Greece to belong to the Greeks.

Golden Dawn, on Greece’s extreme far right, is the only answer to what they see as a creeping takeover by foreigners, the ad implies.

A little later, clips from the TV show “Game of Thrones” appear, warning Greeks, as in the original, that “winter is coming” but that for them this means more poverty-inducing austerity imposed by the European Union.

KKE, Greece’s hard-core communists, will overthrow the system, it says.

The two parties – one sporting an old Greek symbol closely resembling a swastika as its emblem, the other the Soviet hammer and sickle – are far behind the leaders in Sunday’s election. But they may come third and fourth, respectively, providing noisy opposition from right and left.

Opinion polls show that the leftist Syriza party of former prime minister Alexis Tsipras and the conservative New Democracy Party of Vangelis Meimarakis are neck and neck – but dominant, gathering roughly 60 percent of the vote between them.

Next down the list, however, is Golden Dawn, a party with many of its leaders in prison yet drawing as much as 8 percent of the vote. That would give it more seats in the 300-seat parliament than the 17 it had in the last one – most likely making them the third largest party.

Accused of neo-Nazi tendencies, Golden Dawn may take more of the vote than the polls suggest because of a reluctance among some voters to publicly admit their support.

“I don’t want to be a minority in my own country,” says one of the fresh-faced kids in the ad.

It was Golden Dawn to which former finance minister Yanis Varoufakis was referring when, earlier this year, he warned his German counterpart Wolfgang Schaueble that forcing more austerity on Greeks could prompt a swing to the far right.

At the other end of the spectrum is the KKE, a communist party of the old school, founded in 1918 following the Bolshevik revolution in Russia and with a long history of enduring imprisonment, exile and even execution.

It is not as much of a pariah in the eyes of mainstream Greeks as Golden Dawn, not the least because of its resistance to Nazi Germany in the Second World War.

But its message remains essentially unreconstructed, little different from the days of the Cold War. Greece is drowning in a “capitalist financial crisis,” it says.

There are some signs the KKE may do better than it has come Sunday. One poll gave it 7.7 percent, but most show it with 5 to 6 percent running for fourth place with the socialist PASOK party and the centrist To Potami.

But the party may be attracting some former Syriza supporters who were dismayed by Tsipras’ concessions to international donors.

“You tried them… Now with the KKE there is a way,” it proclaims.

Neither party is likely to be considered as a coalition partner by the eventual winners, particularly Golden Dawn.

But if, as some in Europe would like to see, Syriza and New Democracy formed a grand coalition, Golden Dawn could become the official opposition.—Reuters