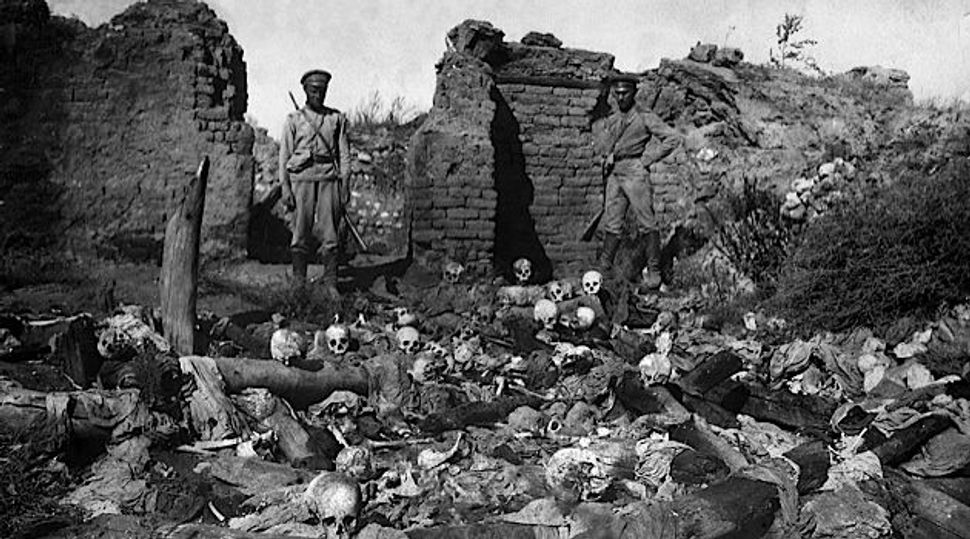 Aftermath of Genocide: In 1915, soldiers stand over skulls of victims from the Armenian village of Sheyxalan in the Mush valley. Image by Getty Images

The Jewish Council for Public Affairs at its annual meeting last week called on Jewish community organizations to lobby Congress and the White House to formally recognize the Armenian genocide. A JCPA spokesman on Wednesday confirmed that the resolution was the umbrella group’s first recognition of the Armenian genocide.

The Reform movement has called the massacres a genocide, but many other organizations have resisted such moves.

The JCPA decision, arrived at through consensus, reverses decades of Jewish groups opposing any such recognition, largely to placate Turkey, Israel’s closest ally in the region until the last decade. Key pro-Israel groups, including the Anti-Defamation League and the American Israel Public Affairs Committee, had lobbied against such recognition.

The deterioration in Turkey-Armenia relations since Israel’s war against Hamas in the 2009 Gaza War — Turkey backed Hamas — has all but ended lobbying by pro-Israel groups on behalf of Turkey. But because calling the massacres a genocide has precipitated crises between Turkey and other nations, until now there has been little appetite for actively supporting such a recognition.

The resolution calls for the Jewish community to work with Armenian-American groups to advance recognition of the genocide.

“We must not let the politics of the moment, or the U.S. government’s relationship with Turkey, sway our moral obligation to recognize the suffering of the Armenian people,” it says.

Approximately 1.5 million Armenians were killed or deported during what the vast majority of historians agree was a genocide.

The JCPA conference also called on U.S. and foreign governments to agree on a definition of anti-Semitism that would distinguish between legitimate criticism of Israel and unfair attacks.