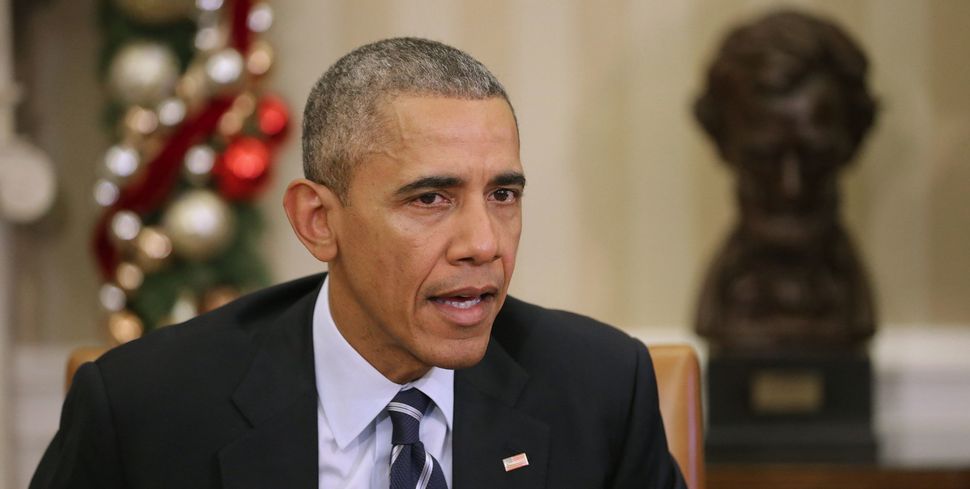 President Barack Obama vowed on Saturday that federal investigators would find out what motivated a married couple in California to shoot and kill 14 people, and he asked Americans to stand united after the attacks.

“We are strong. And we are resilient. And we will not be terrorized,” Obama said in his weekly address.

Obama met on Friday with Gabby Giffords, a Jewish former Democratic representative from Arizona who survived a mass shooting in 2011 and has since become an advocate for tougher laws.

Tashfeen Malik and Syed Rizwan Farook were killed in a shootout with police after the Wednesday attack during a holiday party at a social services agency in San Bernardino, California.

The Federal Bureau of Investigation is investigating the massacre as an “act of terrorism” after Malik was believed to have pledged allegiance to a leader of the militant group Islamic State.

“It is entirely possible that these two attackers were radicalized to commit this act of terror,” Obama said. “And if so, it would underscore a threat we’ve been focused on for years – the danger of people succumbing to violent extremist ideologies.”

Americans were already nervous about terrorism after Islamic State militants killed 130 people in Paris in Nov. 13 attacks. The United States is leading an international coalition fighting the group in Syria and Iraq.

The nation has been transfixed by coverage of the San Bernardino attacks. Obama, already facing scrutiny for his strategy in Syria, has been criticized by Republicans for initially focusing on the issue of gun control after the attacks.

Obama has been frustrated by his failure to convince Congress to pass tougher gun laws despite a series of horrific mass shootings during his time in office.

The U.S. Constitution guarantees the right to own guns, making the subject of reforms – opposed by the powerful gun lobby – politically fraught.

In October, after another shooting, Obama tasked White House lawyers to find new ways he could use his executive powers to address the issue. That review is ongoing.

On Saturday, he called San Bernardino “another American community shattered by unspeakable violence” and said the tragedy was a reminder of the need to make it harder for criminals to get guns.

Obama said it was “insane” that Americans on the “no-fly list” are not banned from buying guns and called on Congress to address the issue.