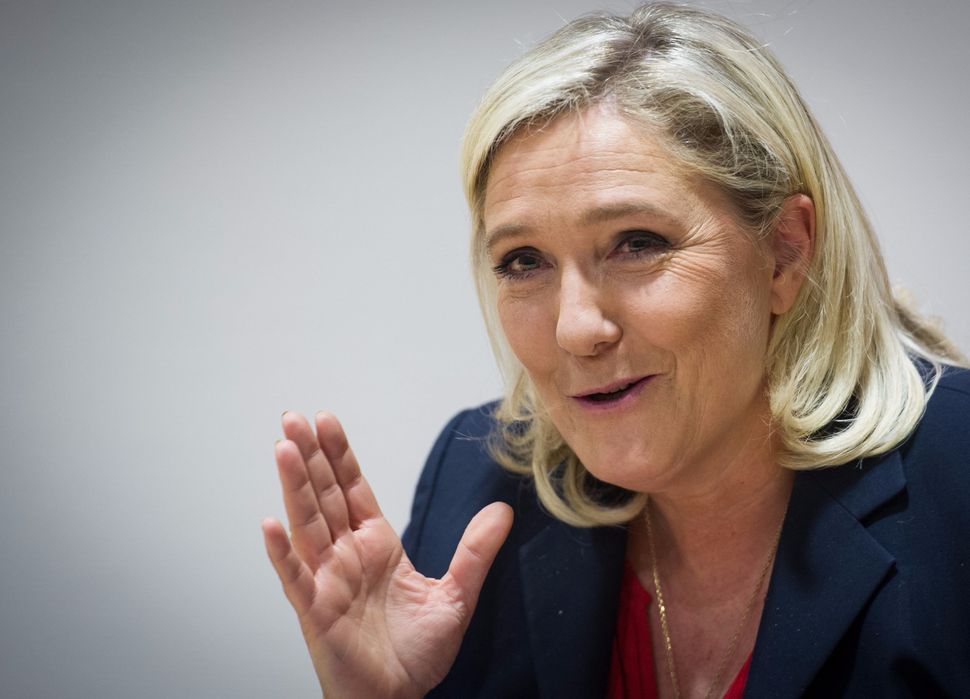 The result, if confirmed, would be a major disappointment for Le Pen and her anti-immigration FN. She had hoped to use regional power as a springboard to a presidential bid in 2017.

The FN won won more votes than any other party nationally in last week’s first round, the best showing in its history, boosted by fears about security and immigration after the Islamist militant attacks in Paris a month ago that killed 130 people.

But then the Socialist Party withdrew its candidates in the north, where Le Pen was the main candidate, and in the southeast, where her niece Marion Marechal-Le Pen was running, urging its supporters to vote for Sarkozy to keep the FN out of power.

France’s Jewish leaders also weighed in against Le Pen. France’s chief Rabbi, Haim Korsia, had pressed voters to “breathe life into democracy… in these particularly troubled times for the nation,” and keep the National Front from victory.

Sarkozy’s The Republicans and center-right allies took 57.5 percent of the vote in the northern region against Le Pen’s 42.5 percent, the Ifop Fiducial poll for iTELE, Paris Match and Sud Radio showed.

“I thank the voters for protecting our beautiful region,” said Xavier Bertrand, The Republicans’ main candidate in Nord-Pas de Calais-Picardie. “I also want to thanks the voters of the Left who clearly voted to create a rampart (against the FN).”

The main parties were not claiming victory, however, warning instead that French politics needed to change.

Aside from immigration concerns, the FN’s rise has been built on deep disaffection with mainstream politics among French voters and a frustration with President Francois Hollande’s inability to bring down unemployment.

In the southeast, another FN target where Marechal-Le Pen was the FN’s lead candidate, the conservatives scored 54.5 percent and the FN 45.5, the poll said.

In the eastern region, where the Socialists did not withdraw but where the FN also did well in the first round, the center right won 48.4 percent against the FN’s 36.4 percent, according to a separate poll by TNS-Sofres-One Point.

Overall, several exit polls showed that out of 13 regions, The Republicans and their conservative allies would likely win six and the ruling Socialists four, with Corsica going to Corsican nationalists. Two of the regional votes were still too close to call between the conservatives and the Socialists.

Regional election boundaries were redrawn after the 2010 election, in which the Socialists had won 21 out of 22 regions.

Le Pen said the result would not discourage the “inexorable rise, election after election, of a national movement” behind her party.

She hailed the “total eradication” of Socialist Party representation in the southeast and the northern regions that the tactical vote produced, and condemned the concerted campaigns against her as “defamation decided in gilded palaces.”

Prime Minister Manuel Valls, who faces deep divisions in his party over its tactical anti-FN withdrawals, said the fight against extremism was not over.

“Tonight, there is no place for relief or triumphalism,” Valls said. “The danger posed by the far right has not gone away, far from it.”

Sarkozy struck a similar theme, calling the strong FN showing a “warning sent to all politicians, ourselves included, in the first round.”

“We now have to take the time for in-depth debates about what worries the French, who expect strong and precise answers,” he said, citing Europe, unemployment, security and identity issues.

Official results were due later on Sunday. — Reuters