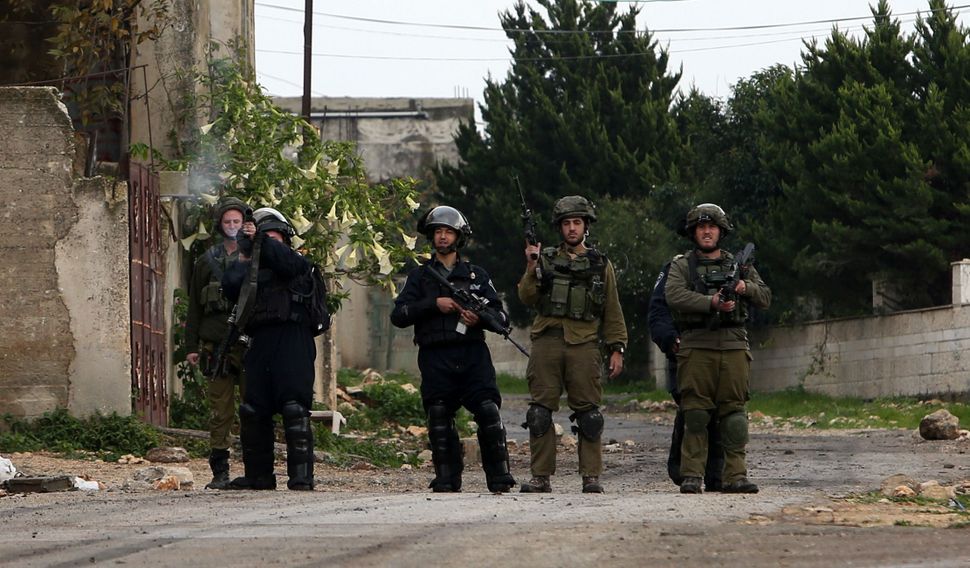 They’ve been banned from Israel’s schools and forbidden from speaking to Israeli soldiers. Israel’s prime minister denounced them from the floor of Knesset. A right-wing group has accused them of being foreign moles.

The Israeli veterans’ group Breaking the Silence has been controversial since it was founded in 2004 by soldiers who had served in Hebron during the Second Intifada. The group’s goal is to give soldiers a forum to speak out about their service in the West Bank and Gaza, and to advocate against Israel’s occupation of the West Bank. It publishes soldiers’ testimonies of alleged abuses during conflict, such as indiscriminate firing on civilians. It also runs tours of Hebron.

Figures on Israel’s political right and center have accused the group of taking testimonies out of context and distorting the truth. It’s drawn particular ire for publishing many testimonies anonymously, for releasing its reports in English and for taking veterans on speaking tours in Europe and the United States.

“Breaking the Silence doesn’t care for the IDF’s morality,” Bennett wrote on Facebook Thursday. “It’s focused on defaming IDF soldiers across the world: In Belgium, in Sweden, in the U.N., in the European Union. Since when does someone who cares for the IDF go around the world spreading blood libels about our soldiers?”

Breaking the Silence has called the recent moves against it an unjust and undemocratic attempt at curtailing speech.

“This is a worrying and violent incitement campaign from the same forces calling to close [Israel’s] Supreme Court, who call the country’s president a traitor, and who work to shut down human rights organizations in Israel,” Breaking the Silence wrote in an email to supporters Wednesday.

Bennett’s and Ya’alon’s decisions to bar the group from schools and from contact with active-duty soldiers come as the Knesset is considering a bill to require NGOs like Breaking the Silence to declare their foreign funding sources. Ya’alon’s move also came the same day as Israeli President Reuven Rivlin spoke ahead of the group at a conference hosted by the liberal Israeli daily Haaretz in New York on Sunday.

Instead, Netanyahu criticized Breaking the Silence.

“Come to the podium and vocally denounce the Breaking the Silence organization, which slanders soldiers worldwide and works to tie the hands of the state of Israel when it defends itself, which defames the state of Israel,” Netanyahu said from the Knesset podium.

“Breaking the Silence is a patriotic organization that helps the IDF keep its moral character,” Galon wrote on Facebook. “They help us guard the human image as a society and army.”

Breaking the Silence has been embroiled in controversy before, drawing criticism from Israelis seen as moderate. In 2013, the University of Pennsylvania Hillel initially barred the group from holding an event in its building, but allowed the event following backlash from students.

After Breaking the Silence released a collection of negative testimonies in May from soldiers who fought in last year’s war in Gaza, centrist Yesh Atid party Chairman Yair Lapid formed a group of soldiers called “My Truth” to counter the allegations with positive accounts of IDF service. He called Breaking the Silence “anti-Zionist” and “radical.”

On Wednesday, the right-wing organization Im Tirtzu took the condemnations a step further, publishing a video accusing the heads of Breaking the Silence and other left-wing NGOs of being foreign “plants” and supporting terror against Israelis.

But even Breaking the Silence’s critics condemned the Im Tirzu campaign as a step too far.

“The name-calling from left and right — using terms like ‘traitors,’ ‘fascists,’ ‘agents’ or ‘McCarthyism,’ — and demonization campaigns or personal attacks do not contribute to a healthy public debate,” read a statement by Gerald Steinberg, president of NGO Monitor, a right-wing organization that opposes Breaking the Silence’s activity and investigates its funding. “This uncivil discourse is antithetical to Israel’s democratic values.”