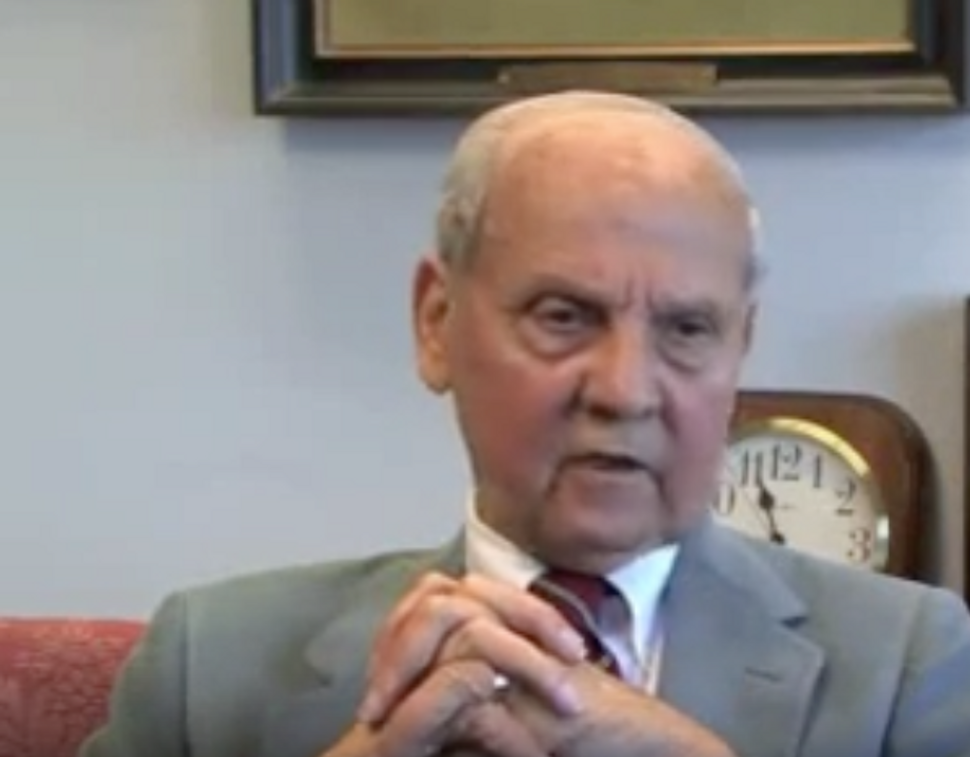 Arlin M. Adams, my great-uncle and lifelong mentor, died peacefully at his home in Philadelphia last night. His accomplishments as a lawyer, advocate and public servant were nothing short of extraordinary.

He served for more than 17 years as one of the most highly-respected judges of the U.S. Court of Appeals for the Third Circuit; presided over what was, at the time, the nation’s largest not-for-profit bankruptcy; developed a national reputation as the go-to mediator and investigator in high-profile legal matters, and was inches away from being nominated for the U.S. Supreme Court numerous times.

His awards from the University of Pennsylvania Law School, Susquehanna University and Philadelphia’s legal community are too numerous to list. His devotion to his fellow Jews included serving as a leader for the American Jewish Committee, the Jewish federation and his beloved synagogue, Congregation Keneseth Israel.

Arlin would not have told you about any of these accomplishments, and believe me, I’ve asked. Nor would he tell you about the fact that when his colleagues traveled in limousines, he rode on SEPTA buses. When he traveled by air, whether to consult with Ambassador and Mrs. Walter Annenberg or to advise the government of Sri Lanka on drafting its constitution, he sat in the coach section of the plane. He ate home-packed lunches at his desk, eschewed fancy clothing and other trappings of wealth and success, and shrugged off questions about his achievements.

As a young lawyer, I was privileged to interact with Arlin in many different contexts – whether as a summer law clerk in his chambers or collaborating on a brief on behalf of one of my clients— and to observe both his mind and his heart in action.

Even just sitting across from him at a Thanksgiving feast or Passover Seder, I was in awe of the breadth of Arlin’s intellectual capacity and the strength of his character. Every statement was careful and measured. Every observation was based in fact, devoid of exaggeration or hyperbole. Indeed, even engaging him in a discussion of sports, Hollywood films or Broadway music led to a careful, measured and thoughtful response.

Arlin’s wife, my aunt Neysa, a former English and history teacher, Phi Beta Kappa graduate of Penn with a major in bacteriology, who did research in physiological chemistry at the Hospital of the University of Pennsylvania, became a stock broker and has been an intellectual powerhouse in her own right, served as Arlin’s muse, his source of strength and the love of his life for more than seven decades. Together they endowed the Arlin & Neysa Adams Lectureship in Constitutional Law at Temple’s Beasley School of Law, and have supported acts of tzedakah across the region.

Throughout his career, Arlin modeled the highest principles and values to which we all aspire: integrity, civility, humility, fairness, dedication to public service and professional excellence. He had a profound impact on the bench and bar, both locally and globally. He was an inspiration to all of us. Arlin Adams was 94.

Marc Zucker is a Philadelphia attorney. This is adapted from remarks given on May 21, 2014, when Arlin Adams was honored by the Brandeis Law Society on the Jewish Law Day in Philadelphia.