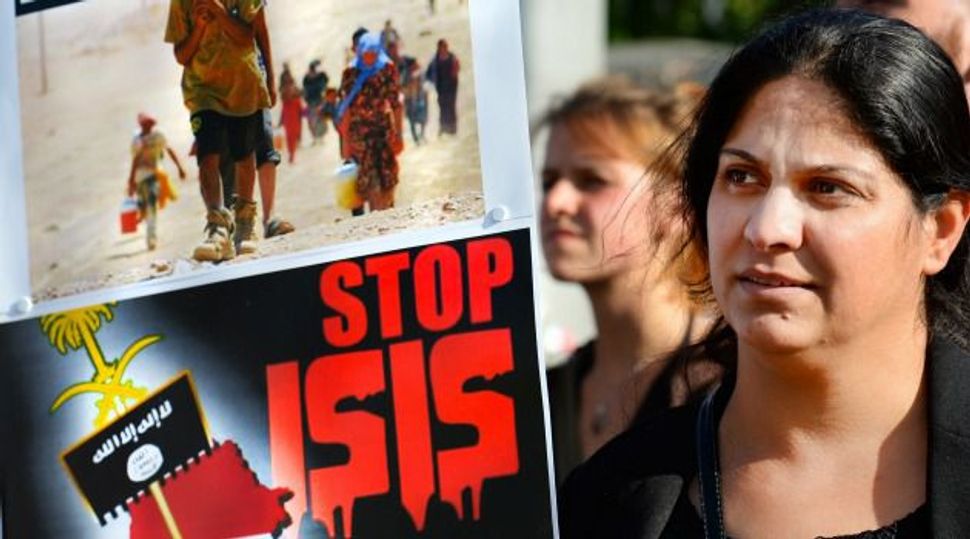 The Islamist push in Iraq and Syria would appear to be bad news for Israel. But there may be some geopolitical benefits. Image by getty images

Ayoob Kara, a deputy Israeli cabinet minister, used to double as an unofficial intermediary with the few of his fellow Arab citizens who have left to join Islamic State insurgents in Syria or Iraq.

Negotiating discreetly through relatives and go-betweens, he would offer them reduced jail terms if they returned to Israel, cooperated with security services and helped deter other would-be Islamic State recruits by publicly disavowing the group.

But with the number of Islamic State sympathizers in Israel growing from its initial trickle, and some accused of trying to set up armed cells within the country’s 18-percent Muslim minority, the deputy minister no longer sounds so accommodating.

“I used to work hard to dissuade people from joining ISIS, but now I say that there’s no point,” he told Reuters in an interview, using an acronym for the insurgents.

“If, by this point, when the dangers are abundantly clear to everyone, they still want to go, then they are beyond saving and it’s a one-way ticket for them. It’s literally a dead end.”

Kara, a confidant of Prime Minister Benjamin Netanyahu, was expressing a hardening of government policy against Islamic State, which, though preoccupied with battling Syrian and Iraqi regime forces, has recently inveighed against Israel.

“Jews, soon you shall hear from us in Palestine, which will become your grave,” promised a Dec. 26 voice recording on social media attributed to Islamic State chief Abu Bakr al-Baghdadi.

In October, two video clips surfaced in which Islamic State gunmen threatened to strike Israel. They spoke in near-fluent, Arabic-accented Hebrew, suggesting they were among the several dozen Israeli Arabs who the Shin Bet domestic intelligence service estimates have joined the group abroad.

Israel sees a major cross-border attack on it by Islamic State as unlikely. But it is less sanguine about support for the group inside Israel, which is already beset by Palestinian street violence that has surged in the last three months, stoked in part by strife over a contested Jerusalem mosque complex.

“It (Islamic State influence) is beginning to spread here as well,” Intelligence Ministry director-general Ram Ben-Barak told Israel’s Army Radio on Sunday. “The ISIS scenario we worry about is ISIS cells arising in Israel to carry out terrorist attacks.”

Still, a series of spectacular incidents involving Israelis and Islamic State has unsettled the Shin Bet.

One Arab citizen who had volunteered to serve in Israel’s army later defected to the insurgents’ ranks in Syria, it emerged this month – a blow for a military that regards itself as a sectarian melting pot in the Jewish-majority country.

Separately, an Israeli Arab used a paraglider to fly into Syria in what the Shin Bet said was a bid to join Islamic State, and three others were arrested on suspicion of trying to set up an armed cell to carry out attacks in Israel on orders from two Israeli Arabs who are already with Islamic State in Iraq.

The paraglider incident prompted Netanyahu to order the revocation of Islamic State volunteers’ Israeli citizenship. Such a move, if it passes higher court review, would effectively shut the door on their return, a step that also has been a controversial topic of debate in European nations whose citizens have been fighting for Islamic State.

It marks a policy shift for Israel, which last year repatriated Marhan Khaldi, an Arab citizen wounded while fighting for Islamic State in Iraq and who made his way back to Turkey, where Israeli diplomats replaced the passport he had discarded en route to the war zone.

Prosecutors had sought an 8- to 12-year prison term for Khaldi and appealed to the Supreme Court to harshen his punishment, saying in a statement that due the risk posed by Islamic State “the time is ripe to get tough on such offenses.” The Supreme Court’s ruling on the appeal could take months.

Khaldi’s lawyer, Hussein Abu Hussein, said Israeli judges lacked court precedents on which to base sweeping new sentences due to the fact that the country outlawed Islamic State only in September 2014 – a delay he attributed to the Netanyahu government’s reluctance to take sides in Syria’s civil war.

Israeli legislation introduced in December 2014 that would raise the maximum jail sentence for joining foreign groups like Islamic State to five years is still under parliamentary review.

“It has taken time for the monstrousness of ISIS to dawn, so while Israel is seeking greater penalties for joining it, this had been taking time too,” said Abu Hussein, who also heads the Israeli Arab civil rights group Adalah.

Abu Hussein said the Shin Bet appeared to be refocusing its anti-Islamic State efforts on social media activity by Arab citizens that might flag up nascent sympathizers for arrest.

According to Kara, the value to Israeli intelligence of Arab citizens who came back from Islamic State’s fiefdoms had waned – meaning any returnees had less to bargain with for clemency.

“There was a time when someone would come back and provide useful information on their camps and recruitment, et cetera,” Kara said. “But that’s in the past now. The whole world is fighting Islamic State and everything is pretty much known.”