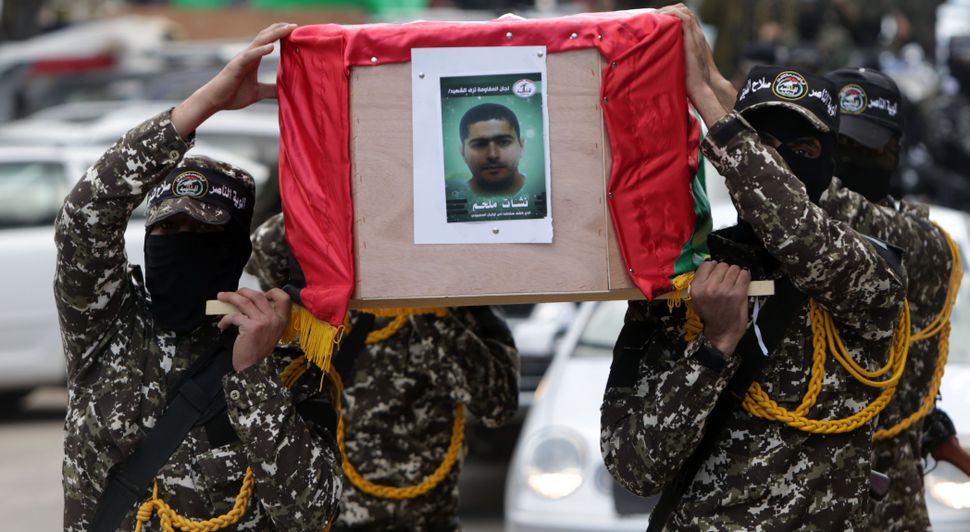 JERUSALEM — The Arab-Israeli man who police ssy shot and killed three in Tel Aviv was buried in his northern Israel hometown.

Nashat Melhem was buried late Tuesday night in Arara in the presence of about 80 mourners. His father, Mohammed, who is under house arrest for abetting his son, did not attend the funeral. Israeli media reported that security services said Mohammed Melhem would have been allowed to attend but chose not to.

Israel released the body for burial late Tuesday, a day after its public security minister said the release was being withheld pending the family agreeing to Israel Police demands that the funeral be small and low-key, and not turn into a rally in support of terrorism against Israel. The funeral had been planned for Sunday.

Melhem, 31, was killed late Friday afternoon in a shootout with police near his home. He opened fire on Israeli forces with the machine gun he allegedly used in the Tel Aviv attack on Jan. 1.

Police said Melhem killed two young men when he shot up a bar in central Tel Aviv and then murdered a taxi driver who transported him from the scene of the crime. Six others were wounded.

Melhem’s two brothers, as well as five other relatives, also were arrested for assisting Melhem or knowing where he was hiding and not reporting it. One brother was released and another was held on house arrest. Another relative arrested Sunday was remanded to custody for seven days, and is believed to be strongly connected to the shooting, according to Haaretz.

Earlier this week, Palestinian militants of the Al-Nasser Brigades, the armed wing of the Popular Resistance Committees, held a mock funeral in Gaza, carry an empty coffin bearing a portrait of Melhem.