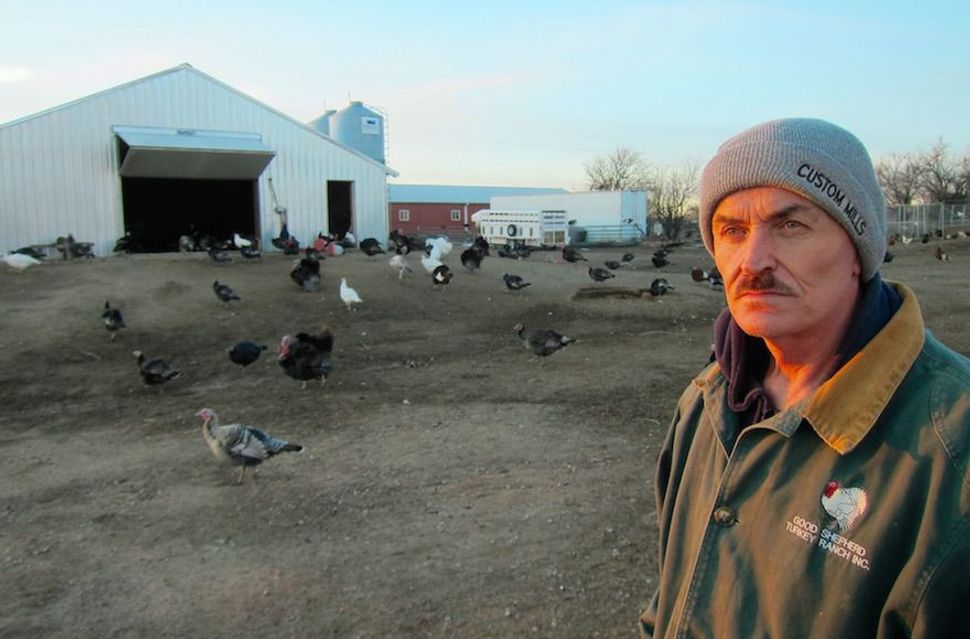 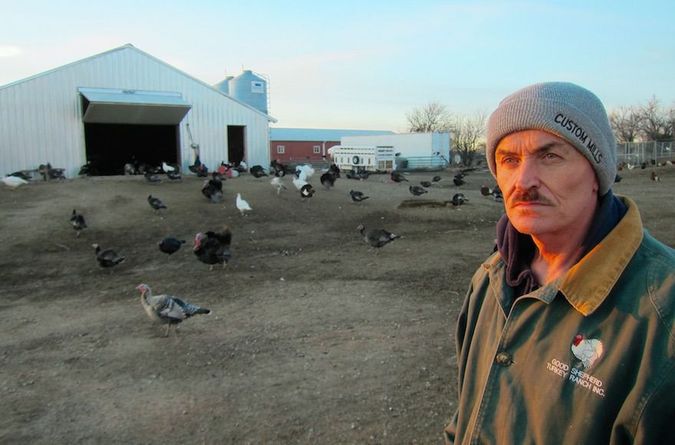 LINDSBORG, Kan. (JTA) – Thousands of birds strutted around like rambunctious kids at recess — six varieties of turkey and nearly 40 breeds of chicken, duck and geese.

As soon as a stranger stepped into their dominion, a dozen of the largest toms surrounded the visitor. “They’re just making sure you’re not here to take over the flock,” fourth-generation farmer Frank Reese Jr. explained.

Out on the open Kansas prairie, about 80 miles north of Wichita, Reese’s Good Shepherd Poultry Ranch has become an oasis of what’s known as heritage poultry — healthy and genetically pure breeds of fowl that meet the American Poultry Association’s Standard of Perfection, first codified in 1874.

In a poultry trade dominated by industrial farms brimming with birds that have been genetically engineered for size and growth — to the point where they can’t walk, let alone fly — Reese has become something of a trailblazer. He’s done it by sticking to methods that are responsible, humane and, as it happens, not the least bit innovative.

“I’m not doing a thing new,” Reese, 67, told JTA. “This is the way all turkeys and chickens were raised 60 years ago — and for generations before.”

Still, there’s something novel about the batch of chickens that’s about to hatch. When the multi-breed mix of approximately 1,500 reaches market-ready maturity in May, the chickens will head east to a rabbinically supervised slaughterhouse in upstate New York — and become the first kosher heritage poultry commercially available since the rise of factory farming more than a half-century ago.

How a Catholic farmer with pre-Civil War Kansas roots became the source of kosher cuisine’s latest leap has to do with a new venture by Farm Forward, a nonprofit advocacy group working toward alternatives to factory farming. Reese is a board member. 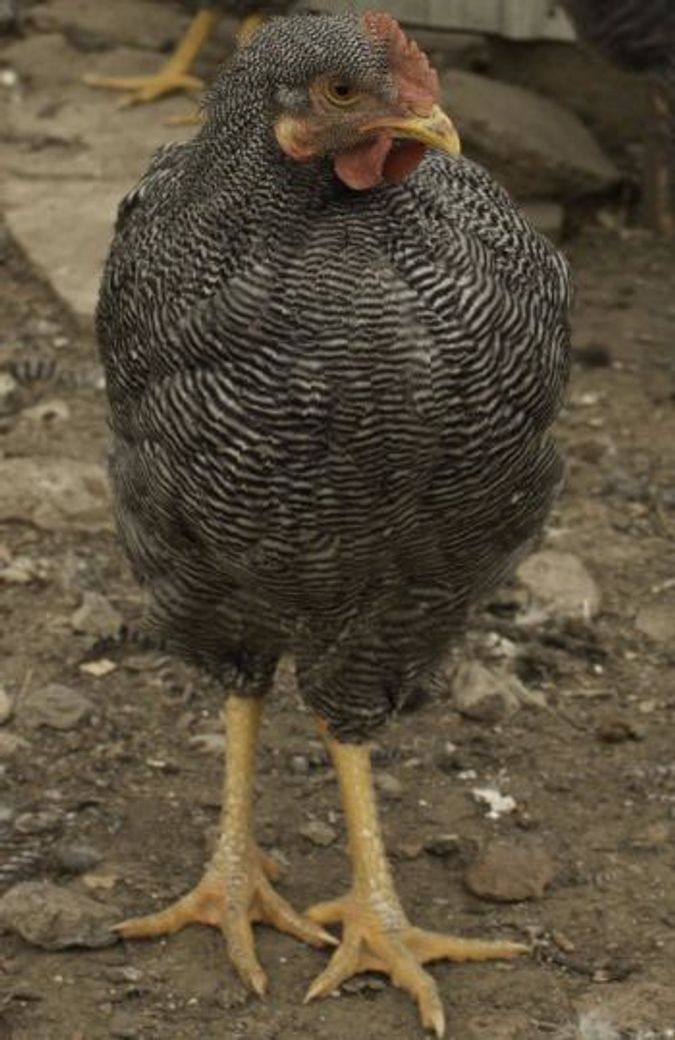 The Jewish Initiative for Animals, or JIFA, officially launches Monday with the aim of educating the Jewish community on the ethical issues of industrial farming and encouraging Jewish institutions to create food policies showcasing animal welfare as a Jewish value. The initiative is being jumpstarted by Washington, D.C.’s Emanuel J. Friedman Philanthropies and the Leichtag Foundation in Encinitas, California.

“The Torah and the Talmud give many examples of how humans are responsible for protecting animals,” said Brooklyn-based JIFA head Sarah Chandler. “Not only are Jews required to provide animals with a good life, there are even prescriptions for providing a good death.”

JIFA aims to encourage institutions to take whatever simple steps they deem appropriate to promote animal welfare, whether that’s dedicating a percentage of an organization’s food budget to vegan products or no longer serving challah made with caged-chicken eggs.

For such a mission, she said, Reese’s poultry is a natural fit.

“What’s more Jewish than chicken?” asked Chandler, whose official title is chief compassion officer. “I know so many people who stopped keeping kosher because they wanted local, organic, free-range and higher-welfare. And now we’re saying you don’t have to stop.”

Reese — who shares his 160-acre property with three dogs and, depending on the season, somewhere between 7,000 and 10,000 birds — concurred that the conscientious kosher consumer is his ideal customer.

“I love the idea that these animals are going to people who respect their food, and who realize that what they choose to eat affects creation for the next generation and that nothing should be wasted,” he said, sitting in the dining room of his 107-year-old farmhouse. The room overflowed with turkey-themed keepsakes, Catholic statuettes and family heirlooms.

Across the table sat Yadidya Greenberg, JIFA’s program coordinator, who’d stopped by to check in on the kosher chicks-to-be. He was last at Good Shepherd in December, when he “U-Hauled” a small batch of chickens to the Pelleh Poultry plant in Swan Lake, New York — essentially, a test run — so they could be butchered and served at the recent Hazon Food Conference in Connecticut.

“When we brought Frank’s chickens to the slaughterhouse, the head rabbi said, ‘Oh, these are the chickens I ate when I was a kid!’” Greenberg recalled. “He was just ecstatic.”

As for Reese, he was always fascinated by birds. At age 11, his Jersey Black Giant chickens qualified for the Kansas State Fair. There, he saw his first Standard Bronze turkeys — the kind featured in Thanksgiving decorations — and met Norman Kardosh, the “Turkey Man” of the poultry world, who became a friend and mentor.

After college, a stint in the army, a career as a nurse-anesthetist (which he still pursues part-time to supplement his poultry habit) and a year at a monastery in Texas, Reese returned to Kansas in 1989 and bought his ranch. At first, his goal was merely to preserve the breeds and techniques that were dying out around him.

His quiet passion made headlines in 2001, when the venerable food writer Marian Burros named Reese’s turkeys the best in the country in The New York Times. It wasn’t long before Martha Stewart came calling, followed by Mario Batali and Alice Waters, who have hosted farm dinners showcasing Good Shepherd birds.

Reese’s ranch is featured prominently in the 2009 book “Eating Animals” by bestselling author Jonathan Safran Foer — now also a Farm Forward board member — and it will be featured in a documentary based on the book, produced by Natalie Portman, that’s scheduled for release later this year.

Poultry distributors took notice. Reese boosted his turkey production from 500 to more than 5,000 annually, and added chickens to the mix. Heritage Foods USA, the primary online retailer of Reese’s birds, sells them for about $10 per pound, with the largest turkeys costing upwards of $200.

Yet the challenge of building a market is daunting, not only because of the expense, Reese said, but because most people don’t understand what “heritage” really means — it isn’t just how you treat animals, but how you treat their DNA. Under the definition of the American Livestock Breeds Conservancy, birds must show a specific set of genetic traits, like natural mating and long lifespan, to be labeled heritage. (Reese actually dislikes the term, as it’s easily misappropriated, like “natural.”)

By contrast, according to Farm Forward, 99 percent of poultry raised in the U.S. now comes from corporate hatcheries that produce a single genetic line, crossbred dozens of times to produce the most meat or eggs as quickly as possible. Reese compares it to packing 400 pounds onto the underdeveloped body of a 5-year-old child.

“All the modern broiler chickens today, including the so-called freedom-rangers, suffer from cardio-vascular problems, diabetes, everything you expect in morbid obesity,” he said.

Plus, whereas the factory chickens are “a blank slate,” birds of various breeds and ages offer tastes and textures as diverse as cuts of beef, Reese said. “Old hens, old roosters, spring chickens, broiler chickens, fryers — all those distinctions actually meant something.”

“Old chickens are my favorite,” Greenberg chimed in. “You just can’t beat the flavor.” They have the highly prized, deep yellow fat that went into your bubbie’s best schmaltz, he added.

But don’t let the fat fool you; heritage poultry is healthy, too. Preliminary findings in a Kansas State University study have shown that one of Reese’s chickens contains six times the Omega-3s of an industrially raised bird, and significantly more protein and less cholesterol than even the higher-end Smart Chicken brand sold in grocery stores.

Kosher pasture-raised poultry is available, “but they still have the factory farm genetics and problems,” said Greenberg. “That’s why we’re working with Frank, to get these birds on the kosher market and get them to these consumers and help fight factory farming.”

Chandler agreed: “Everybody [else] who is fighting factory farming is saying, ‘Well, all you can do is stop eating animals.’ But there are good farmers out there.”

She said JIFA will have a distributor in place by the time Reese’s chickens are processed this spring, with plans for more chickens — and those prize-winning turkeys — to follow. The details are being worked out, Chandler said, but the distributor will likely ship frozen poultry directly to individuals and consumers.

JIFA will also transport some of Reese’s eggs to Jewish farms such as Isabella Freedman in Connecticut and Coastal Roots in California, which will raise the heritage birds as part of their educational programming. There is also a trip planned to bring some of those groups’ farmers to Good Shepherd to learn from Reese, with a longer-term goal of becoming heritage breeders themselves.

“I feel that I am keeping a promise I made to my teachers,” he said. “I’m keeping their legacy alive.”

And through JIFA, Reese will carry on another recently discovered heritage of his own: Last year, a DNA sample sent to Ancestry.com revealed some Jewish lineage on his mother’s side.

“That was fun to find out,” he said, laughing. “Now I know why I’ve always had a tremendous interest in the Jewish faith.”