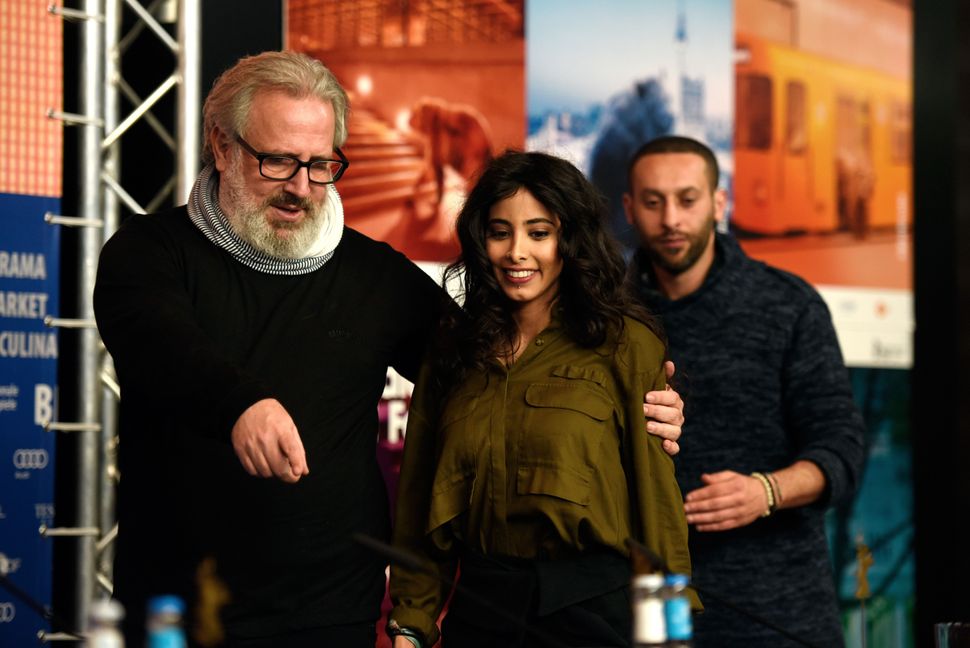 “Junction 48,” which won the Panorama Audience Award for best feature, was one of two Israeli productions to take home prizes this year. It tells the story of a young Arab-Israeli couple from Lod, in central Israel, who use their songs to criticize both Israeli politics and the patriarchal system in their Arab village.

The lead role is played by Tamer Nafar, the front man of DAM, which bills itself as the first Arab rap band.

Speaking to the Berlin audience after the post-award screening, Aloni said he had been dealing for hours with vulgar e-mails and Facebook messages from Israeli Jews. He also said that the Israeli government was displeased with the film.

He insisted his message was that Jews and Arabs can collaborate to make a better life together, despite the fact that there were very few encounters with Jewish characters in the film. “”The movie tells a Palestinian story… the Palestinians are the subject,” he said. The Jews who get the most attention are rival rappers, ultra-nationalists who try to bait the Arab rappers with racist talk – while they are all sitting in a hot tub together. Unlike the Israeli police in the film, the Jewish rappers are “evil but not dangerous.”

“For me, the audience award is amazing. You felt it, [what we were trying to do] and you gave it back to us.”

The other Israeli winner, “Who’s Gonna Love Me Now?” by Israeli brothers Barak Heymann and Tomer Heymann, took home the Panorama Audience Award for documentary. The joint Israeli-British production tells the story of a gay man who was kicked out of his parents’ kibbutz and left Israel for London. The protagonist, now 40, ultimately tries to reconcile with his family.

The Berlinale – considered the most political of the major international film festivals – was not short on films dealing with Jewish topics. It saw the world premiere of Germany’s first feature film based on the Diary of Anne Frank; a feature based on Hans Fallada’s classic book “Alone in Berlin,” about an average German couple committing a unique act of resistance against the Nazis (with actors Emma Thomson and Daniel Brühl); and a film about the epistolary relationship between poet and Holocaust survivor Paul Celan and Ingeborg Bachmann.

As is often the case at the Berlinale, Israeli documentaries focused on the dark side of life in the region.

In “PS Jerusalem,” director Danae Elon – daughter of the late Israeli writer Amos Elon – documents her family’s failed attempt to resettle in the city of her birth – Jerusalem.

Israel was also a key subject in director Alex Gibney’s new documentary, “Zero Days,” which explored the phenomenon of the computer virus “Stuxnet,” designed – probably by the U.S. and Israel – to sabotage Iran’s nuclear program.

A pleasant surprise in this year’s “Culinary” category was “Café Nagler,” in which Israeli director Mor Kaplansky visits Berlin in search of the truth about the cafe run by her ancestors in the roaring twenties capital.