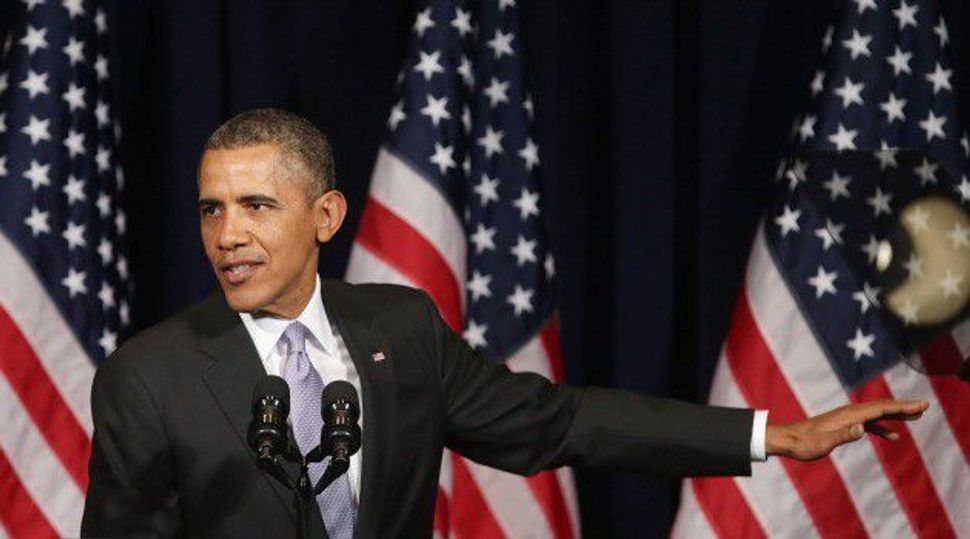 President Barack Obama signed a bill that punishes the BDS campaign against Israel, but said he will not apply a segment that extends protections to West Bank settlements.

The Trade Facilitation and Trade Enforcement Act of 2015, aimed at removing unfair barriers to competitive U.S. trade, passed the U.S. House of Representatives in December and the Senate on Feb. 11. Obama signed the bill into law Wednesday.

A lengthy section of the law on promoting U.S. Israel trade requires non-cooperation with entities that participate in the boycott, divestment and sanctions movement against Israel, and reporting on such entities. The section includes within its definition of an Israel boycott actions that would target businesses in “Israeli-controlled territories.”

“I have directed my administration to strongly oppose boycotts, divestment campaigns, and sanctions targeting the State of Israel,” Obama said in a signing statement. “As long as I am president, we will continue to do so. Certain provisions of this act, by conflating Israel and ‘Israeli-controlled territories,’ are contrary to longstanding bipartisan United States policy, including with regard to the treatment of settlements.”

Obama continued in the statement that “consistent with longstanding constitutional practice” the administration would negotiate with other countries under the law “in a manner that does not interfere with my constitutional authority to conduct diplomacy,” language used in signing statements to signal that a president will not apply a part of a law that does not comport with U.S. foreign policy.

The BDS portion of the law, backed by the American Israel Public Affairs Committee, was authored by Rep. Peter Roskam, R-Ill. and Rep. Juan Vargas, D-Calif.

There are multiple bills under consideration in Congress and in over 20 state legislatures targeting BDS. Many of the state bills mandate the divestment of state funds, including pensions, from entities that boycott Israel and a number of those bills extend protection to the settlements. Illinois and South Carolina have passed into law in recent months anti-BDS bills that include protection for settlements.

The Florida legislature this week passed a law that includes settlement protections, and it awaits signing by Gov. Rick Scott. A similar bill was introduced this week in the Ohio legislature.