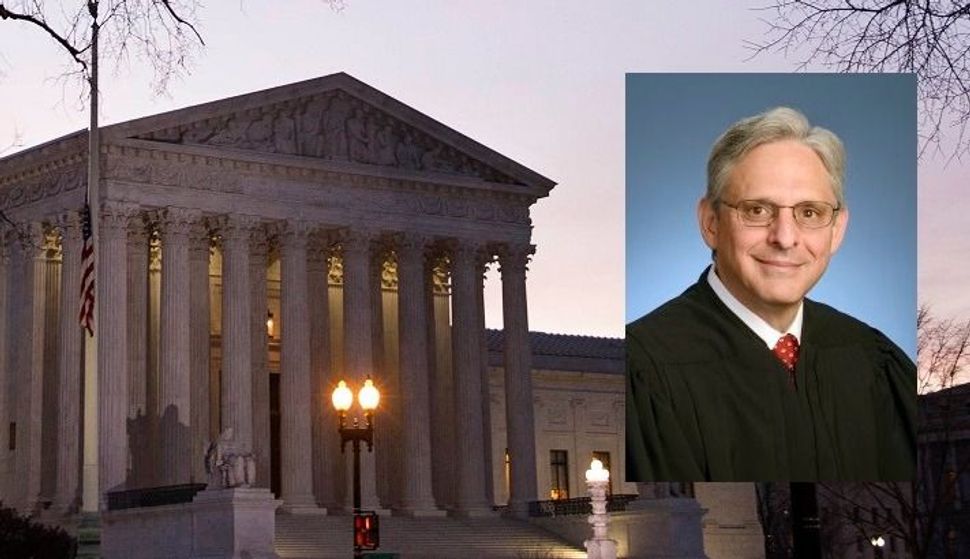 President Barack Obama will nominate Jewish appellate court judge Merrick Garland to the U.S. Supreme Court on Wednesday, the White House said, setting up a potentially ferocious political showdown with Senate Republicans who have vowed to block any Obama nominee.

Garland, 63, who is currently chief judge of the U.S. Court of Appeals for the District of Columbia, was picked to replace long-serving conservative Justice Antonin Scalia, who died on Feb. 13.

He would raise to four the number of Jewish justices on the nation’s top court.

“No one is better suited to immediately serve on the Supreme Court,” a White House official said. “Chief Justice John Roberts, Garland’s colleague on the D.C. Circuit, once said that ‘anytime Judge Garland disagrees, you know you’re in a difficult area,’” the official added.

Garland was born in Chicago; his mother was born Shirley Horwitz and his father Cyril ran an advertising agency. Garland’s wife, Lynn, is a granddaughter of Sam Rosenman, who was a State Supreme Court justice and a special counsel to Presidents Franklin D. Roosevelt and Harry S. Truman, according to Garland and Rosenman’s wedding announcement in The New York Times.

Senate Republicans have vowed not to hold confirmation hearings or a vote on any nominee picked by the Democratic president for the lifetime position on the court. Senate confirmation is required for any nominee to join the bench.

Republicans are demanding that Obama leave the seat vacant and let the next president, to be elected in November and sworn in next January, make the selection.

Garland, is a long-time appellate judge and former prosecutor who Obama also considered when he filled two previous Supreme Court vacancies. Federal appeals court judge Sri Srinivasan had also been a finalist for the nomination.

In a foreshadowing of the pressure campaign the White House and its allies plan to wage in the coming weeks, the White House official noted that seven current Republican U.S. senators voted to confirm Garland to the DC Circuit court in 1997.

The official noted that Republican Senator Orrin Hatch had previously referred to Garland as a “consensus nominee.”

“He has cultivated a reputation as a brilliant, meticulous judge with a knack for building consensus, playing it straight, and deciding every case based on what the law requires,” the official said.

Garland, who has earned praise from lawmakers of both parties in the past, was named to his current job by Democratic President Bill Clinton in 1997, winning Senate confirmation in a 76-23 vote. Prior to that, he worked in the Justice Department during the Clinton administration.

“I’m confident you’ll share my conviction that this American is not only eminently qualified to be a Supreme Court Justice, but deserves a fair hearing, and an up-or-down vote,” Obama said in a statement on Wednesday morning – announcing he would would unveil his pick later in the morning but not naming the person.

Obama said he hoped the Senate would do its job and “move quickly to consider my nominee.”

Without Scalia, the nine-member Supreme Court is evenly split with four liberals and four conservative justices. Obama’s nominee could tilt the court to the left for the first time in decades.

Republicans, hoping a candidate from their party wins the Nov. 8 presidential election, want the next president to make the selection.

Billionaire Donald Trump is the leading Republican presidential candidate. Obama’s former secretary of state, Hillary Clinton, is the front-runner on the Democratic side.

Republicans and their allies already have geared up to fight Obama’s nominee. The Republican National Committee on Monday announced the formation of a task force that will work with an outside conservative group to spearhead attack ads and other ways of pushing back against Obama’s choice.

The U.S. Court of Appeals for the District of Columbia Circuit has served as a springboard to the Supreme Court for several justices including Scalia in recent decades.

Obama may have been looking for a nominee who could convince the Republicans to change course. Garland could fit that bill with his moderate record, background as a prosecutor and history of drawing Republican support.

Garland was under consideration by Obama when he filled two prior high court vacancies. Obama, in office since 2009, has already named two justices to the Supreme Court: Sonia Sotomayor, who at 55 became the first Hispanic justice in 2009, and Elena Kagan, who was 50 when she became the fourth woman ever to serve on the court in 2010.

Presidents tend to pick nominees younger than Garland, so they can serve for decades and extend a president’s legacy. But Obama may reason that the choice of an older nominee might also entice Senate Republicans into considering Obama’s selection.

Trump, speaking on ABC’s “Good Morning America” program, said it was critical for Republicans to take back the White House to avoid Democrats shaping the Supreme Court.

“You have four Supreme Court judgeships coming up, and that would mean they would take over, that would mean for 50 years, probably, this country will never be the same,” Trump said.