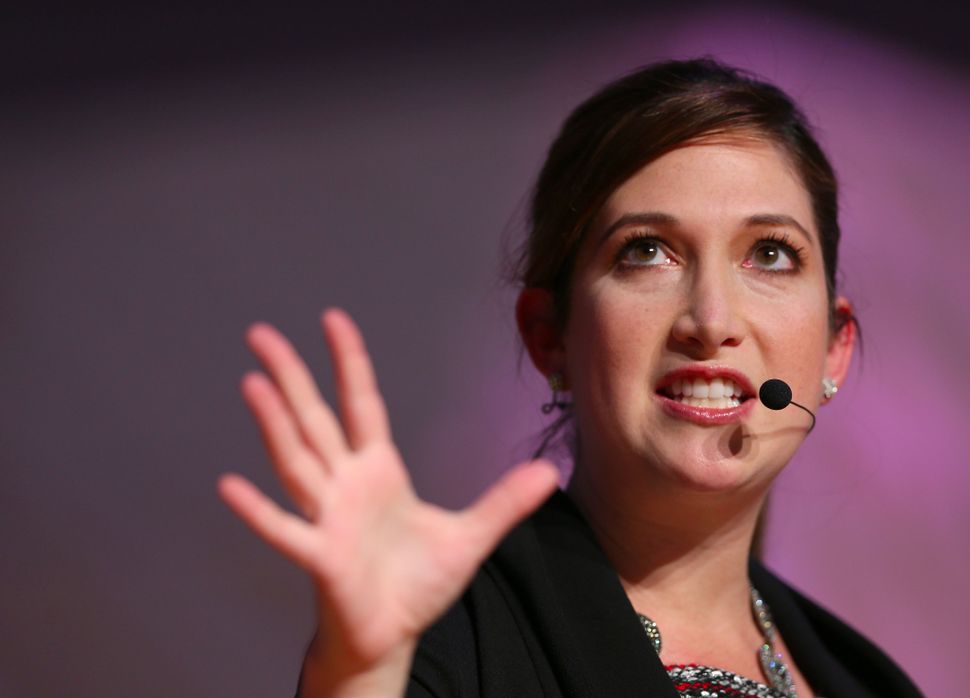 In a talk to hundreds of philanthropists and foundation representatives, former Facebook spokesperson and marketing director Randi Zuckerberg credited Shabbat and other Jewish concepts for some of her main pieces of business advice.

Zuckerberg told the crowd that she was bemused by those who viewed her emphasis on life balance as an innovative idea.

“People were like ‘Wow, new concept.’ No, Shabbat,” Zuckerberg said in her talk Tuesday at the closing plenary of this year’s annual Jewish Funders Network conference, which was held at a hotel in the hilly seaside La Jolla section of San Diego.

Zuckerberg, who has launched her own consultancy and produced digital media content since leaving Facebook in 2011, stressed the need for businesses and organizations to be open to sudden and dramatic changes. At the same time, she added, too often in the high-tech world people are only thinking about what comes next and not where they are coming from.

Zuckerberg plugged her new reality show, “Quit Your Day Job,” which she called “‘Shark Tank’ for women.” She also played up her unrealized dream of becoming a cantor and spoke proudly of her much-publicized singing of the late Naomi Shemer’s “Yeushalayim Shel Zahav” to former Israel President Shimon Peres at a Shabbat dinner at the Davos World Economic Summit in 2014.

Recalling the attention — positive and negative — inspired by the incident, Zuckerberg said she realized that “young leaders don’t get the benefit of separating your personal and professional life anymore.” The audience applauded strongly when she added: “So in that one moment I made Judaism a huge part of my personal identity.”

Zuckerberg, the sister of Facebook co-founder Mark Zuckerberg, acknowledged being disturbed by the negative reactions — so much so that she passed up an opportunity for an encore performance the next year. She added that she was “embarrassed” and “heartbroken” by her decision to decline.

This year’s JFN conference drew a record 450 individual philanthropists and foundation representatives, 180 of whom were attending for the first time. Preceding Zuckerberg’s remarks, Jerusalem Mayor Nir Barkat made a pitch for continued philanthropic investment in his city and its innovation sector.

On Sunday, the conference’s opening plenary focused on the topic of how philanthropists and foundations could play a role in reducing incivility in the Jewish world and avoid using their funding as a tool for intimidating recipients over disagreements that might come up.

Another of the conference’s plenary sessions featured Jake Porway, founder and executive director of DataKind, a not-for-profit organization that provides pro bono services to other not-for-profits with the aim of improving their collection and use of data to increase their impact. The Monday session also included remarks from Lisa Eisen, vice president of the Charles and Lynn Schusterman Family Foundation, who called on funders to use their influence and resources to incentivize organizations to enhance their use of data and to share their data.

The annual JJ Greenberg Memorial Award, which honors a foundation professional under 40 who has demonstrated extraordinary leadership in Jewish philanthropy, was awarded to Lesley Matsa, a program officer at Crown Family Philanthropies in Chicago. The Shahaf Foundation in Israel was awarded the biennial Shapiro Prize for Excellence in Philanthropic Collaboration.