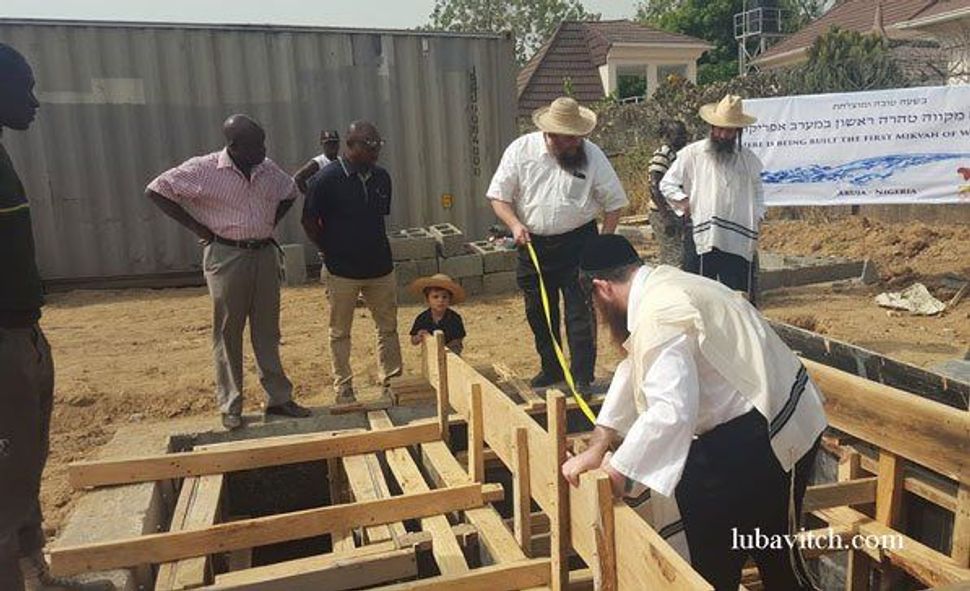 An Israeli firm and a Chabad rabbi working in Nigeria are preparing to open the first known Jewish ritual bath, or mikvah, in West Africa.

Yisroel Ozen, a prominent Chabad emissary based in Nigeria, is supervising the construction of a mikvah for women in the Nigerian capital of Abuja on land purchased for him by an Israeli firm operating in the country, the Israeli daily Maariv Tuesday.

Ozen said the mikvah is the only known one in West Africa, a claim that is also stated on a Hebrew- and English-language sign announcing the project in front of the construction site.

Ozen said Nigeria has “a thriving Israeli community that nonetheless lacks basic amenities.” He said that from the point of view of the halacha, Jewish religious law, “a community cannot exist without a mikvah because it’s the key to the continuity of the Jewish people.” Some 1,200 Israelis live in Nigeria, according to the Maariv article.

Jewish law states that women should immerse themselves in the mikvah before marriage and at least once a month in a ceremony meant to purify them after menstruation.

Another mikvah is planned at a later stage for men, Maariv reported, and may be broadened after the opening this year to include a community center.

EMI Systems LTD, a security firm that is based in Abuja and is owned by the Israel-born businessman Eyal Mesika, ordered materials from Europe and the United States to build the mikvah. The article did not specify the cost of construction.