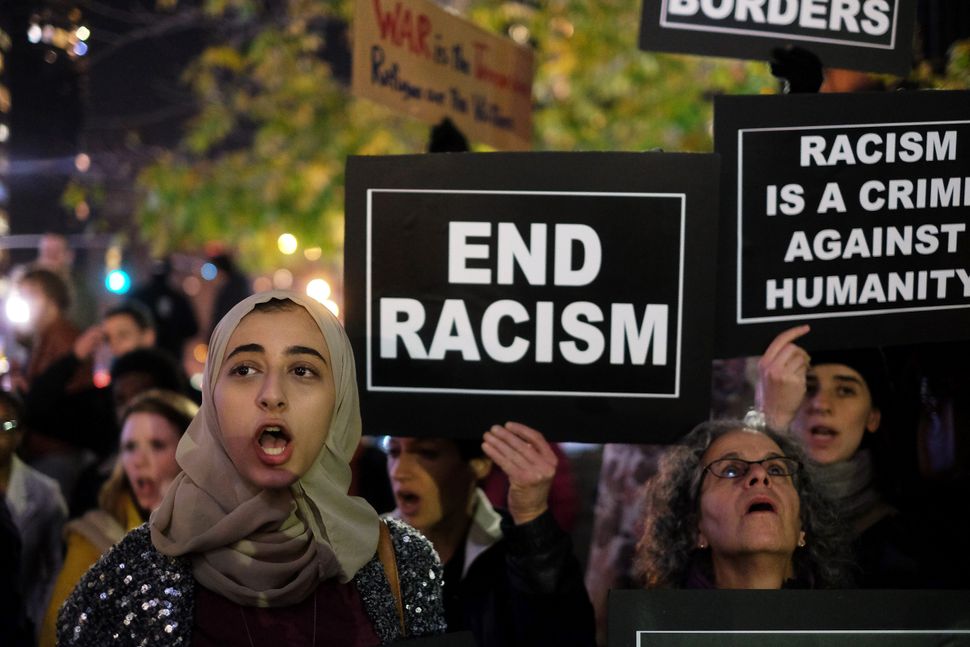 Human rights activists and people from Muslim community display placards during a demonstration in New York on December 10, 2015 in solidarity for Syrian and Iraqi refugees. Image by Getty Images

WASHINGTON (JTA) — From a bid to overcome resistance to building a mosque in New Jersey to defending a Muslim student at a military academy who wants to wear a hijab, Jewish groups this week joined efforts to stop anti-Muslim discrimination.

Nearly a dozen Jewish groups are also backing legislation against banning entry to Muslims, prompted by a proposal for such a ban by presidential candidate Donald Trump.

The American Association of Jewish Lawyers and Jurists the Becket Fund, a conservative group that advocates for religious liberty, in a friend of the court brief filed Wednesday on behalf of Muslims who have been blocked from building a mosque in Basking Ridge, New Jersey.

Also Wednesday, the American Jewish Committee called on The Citadel, a military college in South Carolina, to allow a Muslim student to wear a hijab.

The college president, Lt. Gen. John Rosa, said that deviations from the school’s uniform could detract from leadership training, the Washington Post reported Wednesday, adding that the college otherwise remains committed to diversity.

“The Citadel should reverse its hijab ban as part of its commitment to preparing its students for leadership positions in military service and civilian careers,” Robert Silverman, AJC’s director of Muslim-Jewish relations, said in a statement.

The statement noted that Jewish groups, including the AJC, backed legislation passed in 1988 that allowed servicemen to wear religious garb based on litigation brought in the 1980s by a Jewish Air Force officer who wanted to wear a kippah.

Separately, more than 70 members of the U.S. House of Representatives on Wednesday introduced legislation that would prohibit religion as a criterion for banning entry to visitors, immigrants or refugees.

Broadsides against Muslims by Trump, the presumptive Republican presidential nominee, and other Republican candidates sparked the legislation.

The legislation is backed by at least 11 Jewish groups, including umbrella bodies for the Reform, Conservative and Reconstructionist movements and the public policy umbrella, the Jewish Council for Public Affairs, among the more than 30 faith groups that have expressed support for it.

All but one of the bill’s backers thus far are Democrats. The exception is Richard Hanna, a moderate Republican from New York.