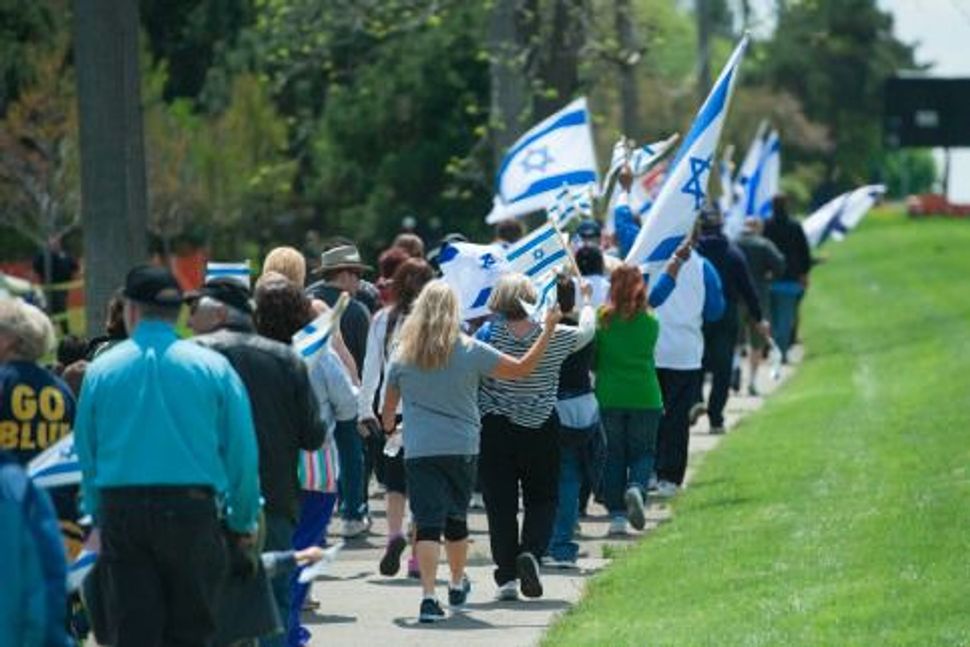 Image by Walk for Israel

For the second year in a row, the Detroit area’s Walk for Israel has rebuffed the sponsorship of left-wing pro-Israel groups because of their support for boycotting settlements.

At the heart of the dispute is a question of definitions: Is support of a boycott targeting Jewish enterprises beyond Israel’s 1967 borders the same as backing the blanket economic and cultural boycott of Israel called for by the pro-Palestinian Boycott, Divestment and Sanctions movement?

Andre Douville, the chairman of the coalition organizing the walk, said Partners for Progressive Israel and Americans for Peace Now fit the coalition’s definition of supporting the BDS movement.

“Simply put, our advocacy and policy statement says that any organization that supports any form of BDS would not be accepted as a cosponsor,” Douville told JTA on Friday, two days before the event, which celebrates Israel’s independence. “They want to argue that they only support it for business in the occupied territories.”

The left-wing groups – citing different criteria – say that while they support a boycott of settlement goods, they vigorously reject boycotts of Israel.

“We oppose boycott, divestment and sanctions efforts directed at Israel,” said Ori Nir, APN’s spokesman. “We believe such campaigns are misguided and counterproductive. We therefore encourage fellow Americans to buy goods made in Israel, while discouraging them from buying goods made in what is not Israel, in West Bank settlements.”

Differences over whether actions against BDS should be extended to groups that exclusively target settlements are playing out in Jewish communities across the United States. Some Jewish groups have lobbied to extend anti-BDS legislation — now under consideration in Congress and in state houses — to protect settlements. Others are working to exclude such protections, instead favoring legislation that only rejects BDS when it is applied within the ’67 borders, or the Green Line.

The wrinkle in Detroit’s case is that the Jewish Community Relations Council of Greater Detroit, and the local federation that largely funds it, have not organized Israel independence celebrations since the late 1990s, with the exception of a 60th birthday program in 2008. That created an opening 11 years ago for the establishment of a coalition of organizations spearheaded by Temple Shir Shalom, where Douville is executive director, dubbed Walk for Israel. The walk, which attracts about a thousand participants, starts at the suburban West Bloomfield synagogue.

Ken Knappow, long involved in the Detroit-area Jewish community and a member of left-wing pro-Israel groups, said he noticed two years ago that the walk’s sponsors include right-wing groups like the Zionist Organization of America, the Republican Jewish Coalition and Christian Zionist organizations, along with uncritical pro-Israel groups like the American Israel Public Affairs Committee and StandWithUs.

Saying the coalition was unrepresentative of the Jewish and pro-Israel communities in the area, Knappow asked Partners for a Progressive Israel and Americans for Peace Now if he could sign on as a co-sponsor of the walk on their behalf. That would allow him to present the groups’ materials at the outset of the walk and to maintain a visible presence during the walk.

The national groups gave Knappow the go-ahead, but the 18-person board of Walk for Israel rejected the applications, accusing the organizations of supporting BDS.

Knappow provided statements to the Walk for Israel board from the national groups rejecting BDS, but the board was adamant that the settlements exclusion was out of bounds.

“Embedded in the mission of PPI is inherent support for what we call targeted divestment and sanctions,” Douville said Friday. “We don’t even call it occupied territory, it’s Judea and Samaria,” using the biblical names for the West Bank preferred by those who do not consider the areas occupied under international law.

“The right wing is not great on nuance,” Knappow countered in an interview.

Partners for a Progressive Israel, for its part, notes its membership in Zionist umbrella bodies and its roots in Hashomer Hatzair, a storied leftist Zionist movement.

“In terms of the camp of Israel supporters, they are dividing us, they’re not allowing gray areas, it’s entirely not kosher,” said Maya Haber, a Pittsburgh-based member of the national Partners for a Progressive Israel who launched a petition last week urging Walk for Israel to include the group and Americans for Peace Now as sponsors.

“We have called for a targeted boycott of settlements’ goods as a means to help end the occupation,” the petition states. “To be clear, as Zionists we do not support a boycott of Israel proper. Rather we accept Israel’s territorial distinctions, and boycott only those areas in which Israel itself exercises military rule and not extend civic governance to all its residents.”

Knappow reapplied this year; Douville wrote back saying the rejection still stood, unless the groups had changed their policies. In the interview, Douville said that members of Partners for a Progressive Israel are welcome to participate as individuals. Knappow passed.

Allan Gale, associate director of the Jewish Community Relations Council of Greater Detroit, would not comment on why Jewish policy umbrellas like the JCRC, the federation and the Jewish community center stopped organizing the Walk for Israel. Knappow said it was too bad the walk was no longer in the hands of the JCRC or another more representative umbrella body.

“When the JCRC was involved, there were no problems,” he said.

The JCRC this year is not among the walk’s co-sponsors, although it has been in other years since Douville’s coalition started organizing the event. Gale would not comment on why the JCRC dropped out this year, but said the JCRC maintained a relationship with Douville and would be collecting Israeli foods at the Walk for Israel launch site for distribution to the homeless.

“As we speak, I am preparing an eblast reminding potential walkers to bring Israeli food products for donation, to be collected in boxes we will have at the walk starting area,” he said in an email.