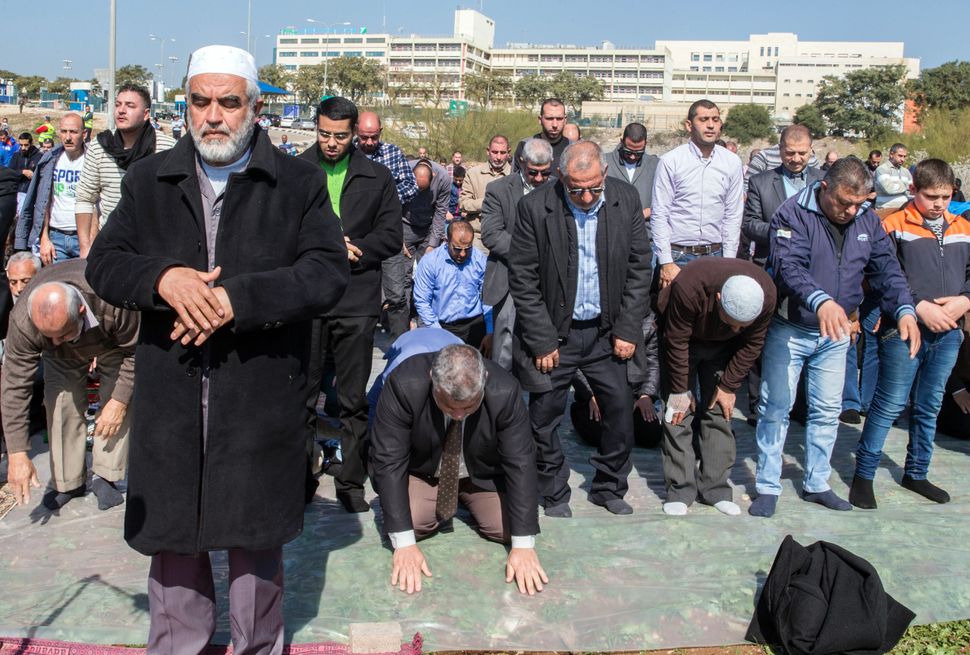 Israeli Arabs and Sheikh Raed Salah (front-L), the leader of the radical northern wing of the Islamic Movement in Israel, takes part in a prayer in support for the release of Mohammed al-Qiq, a Palestinian prisoner on hunger strike, outside the hospital where he is being treated in the northern Israeli town of Afula on February 12, 2016. Image by Getty Images

Israeli Muslims are more devout than the country’s Jews, Christians and Druze, but less so than other Muslims in the region, according to Pew research released Wednesday.

About 68% of Muslims living in the Jewish state say religion is “very important” in their lives, a figure that is lower than in all countries in the region, except Lebanon.

In contrast, a plurality of Israeli Jews, 44%, say religion is not important in their lives, according to another Pew study.

A smaller share of Israeli Muslims than the median in the Middle East practiced four of the five pillars of Islam — professing the Muslim proclamation of faith, praying five times a day, giving charity and fasting during Ramadan.

Muslims in Israel scored higher only on one of the religion’s principles, making a pilgrimage to Mecca, with 23% having made the trip, compared to a 17% median in the Middle East.

Nearly all Israeli Muslims, 97%, agree with Islam’s central tenet, that there is only one god and that Muhammad is his prophet — close to the almost 100% of Muslims in the Middle East and Africa who believed it to be true.