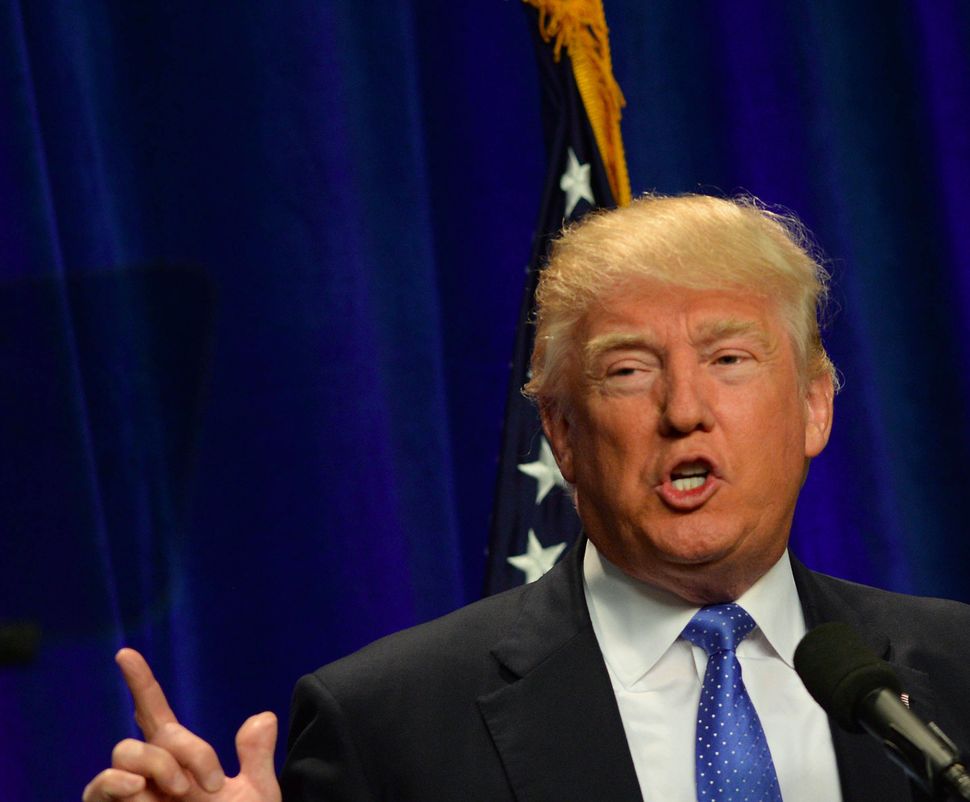 Yes, there are Jews attending the Republican National Convention next week in Cleveland.

But they’ll be barely visible, and the reason has everything to do with the presumptive nominee, Donald Trump.

The Republican Jewish Coalition usually rolls out major shebangs at party conventions, starting with a news conference where you can count on director Matthew Brooks to confidently project growth in the GOP share of the Jewish vote.

Not this year, an RJC spokesman said in an email that noted plans for “a couple of events” closed to the media. One is a “salute to pro-Israel elected officials” – in governors’ mansions, in the U.S. House of Representatives and in the Senate – which is typical of past conventions.

Jewish donors who have undergirded much past campaigning? Try to find them.

“I’m going to watch on TV,” emailed one donor who has been a constant at the conventions and asked not to be named. “Should be quite a show.”

He said many of his GOP Jewish donor compadres also had cats to clean and hair to shampoo and long walks in the woods planned for next week.

Among the major fund-raisers staying away, according to a list compiled by Jewish Insider, are Charlie Spies and Yitz Applebaum. The list says they will be joined on the sidelines by George W. Bush administration alumni Noam Neusner, Tevi Troy and Jay Zeidman.

The American Israel Public Affairs Committee and the Jewish Federations of North America, usually ubiquitous at conventions, are maintaining low profiles not just at the Republican event but also the Democratic assembly later this month in Philadelphia. That means no “breakfasts with mishpocha” organized by AIPAC to bring together its activists with Jewish lawmakers and congressional staffers.

A “Salute to Israel” in AIPAC’s name appears on some Democratic National Convention schedules in circulation, but an official at the prominent Israel lobby told JTA that it is not an AIPAC event.

The JFNA, through its Israel Action Network and in partnership with the Israel Project, is organizing a single event at each convention honoring state legislators who have countered the anti-Israel Boycott, Divestment and Sanctions movement. But unlike past years, there is no convention-specific event planned.

Two Jewish groups are maintaining a profile typical of their past participation — at venues near the conventions, but raising issues not directly related to the nomination. The American Jewish Committee is running the same series of panel discussions in both cities on anti-Semitism, U.S. demographics, U.S. foreign policy and on the Middle East. The Anti-Defamation League is running a session in Cleveland on bipartisanship; it’s Philly session is on hate language.

Even as many Jewish Republican insiders are steering clear of the convention, Trump seems to be considering moves that would please many of the party’s pro-Israel activists and donors.

The Republican Platform Committee on Tuesday approved language that does not mention the two-state solution as a favored outcome in the Middle East. It also says Jerusalem is Israel’s “indivisible” capital and rejects calling Israel’s presence in the West Bank an “occupation.”

Both plank items are big wins for the right wing of the pro-Israel community. And the author of the revised language, Alan Clemmons, a South Carolina state representative, worked closely with top Trump aides to formulate the language.

Clemmons, who carefully described himself to JTA as a “delegate bound for Donald Trump” – a tad short of someone who enthusiastically supported the candidacy – was careful when asked if he thought Trump would endorse the policy.

“I’ll have to let Mr. Trump speak for himself,” he said. “Let me just say his advisers at the highest level are in support of the language.”

There may yet be joy for pro-Israel folks at the Republican convention: Of the five purported names in circulation for the vice presidential nod, three of them – former House speaker Newt Gingrich, New Jersey Gov. Chris Christie and Indiana Gov. Mike Pence — have longstanding close ties with the pro-Israel community.

A fourth, Sen. Joni Ernst of Iowa, has worked hard to forge ties with the community since her 2014 election – between her November election and taking her seat, she visited the country. The fifth, Lt. Gen. Michael Flynn, left the Obama administration as the Defense Intelligence Agency chief in 2014 in part over concerns shared by Israel regarding U.S. policy on Iran.

Now if, as rumored, Trump names his daughter, Ivanka, as running mate — well that’s one Jew, at least, who doesn’t mind making appearances with him.