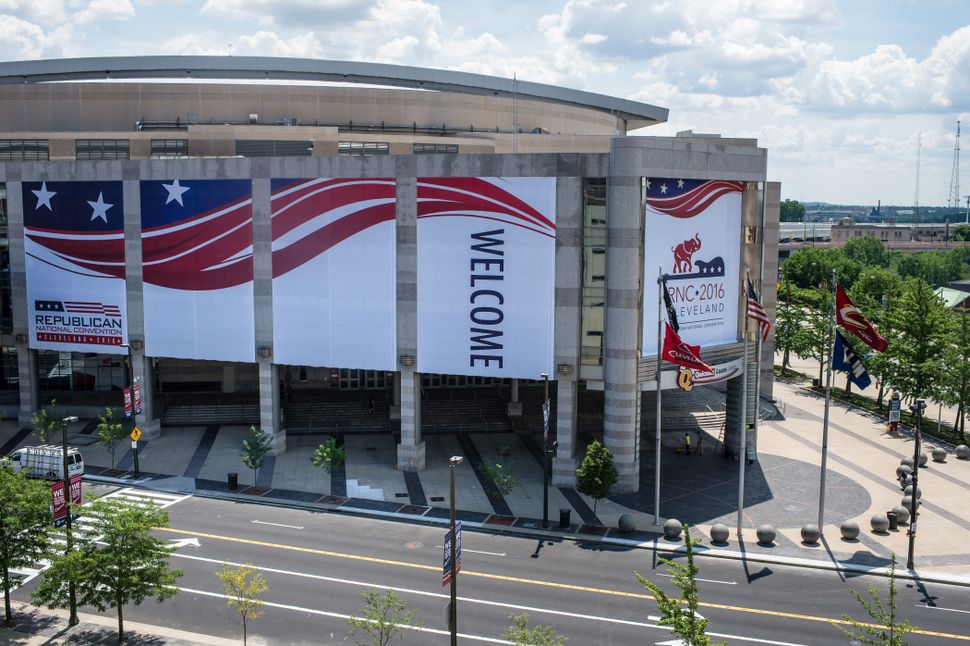 The Republican party’s platform, including new language on Israel, will most likely be set before its convention in Cleveland. Image by Getty Images

Rejecting decades-old policy, the Republican Party approved on July 12 a platform that does not include a call for a two-state solution to the Israeli–Palestinian conflict. Instead, it defers to Israel to determine whether it is interested in negotiating a deal with the Palestinians, and omits any reference to a solution that would establish an independent Palestinian state alongside Israel.

The platform subcommittee passed it by an overwhelming majority, and the full committee gave it a standing ovation as they approved it. Now the language goes to the convention, where it is unlikely to change.

“The U.S. seeks to assist in the establishment of comprehensive and lasting peace in the Middle East, to be negotiated among those living in the region,” the Republican platform states. “We oppose any measures intended to impose an agreement or to dictate borders or other terms, and call for the immediate termination of all U.S. funding of any entity that attempts to do so. Our party is proud to stand with Israel now and always.”

In omitting support for a two-state solution from its platform, the Republican platform committee reflected the power of newly emboldened activists. They are determined to challenge the long-held notion that only territorial compromise will bring peace to the region, and they have backing from Jason Greenblatt and David Friedman, advisers to presumptive Republican nominee Donald Trump.

“This is an amazing victory,” said Jeff Ballabon, head of the Iron Dome Coalition Super PAC, which had advocated fiercely for dropping mention of the two-state solution from the plank. In an interview minutes after the platform committee convened in Cleveland approved the language, Ballabon said the new language expresses the views of Republican voters as well as that of the government of Israel. He rejected the argument that the new platform will undermine efforts to bring peace to the region, saying there is “zero impediment” in the new plank to moving forward to a two-state solution if Israel decides to take that path.

Greenblatt is the chief legal officer of the Trump Organization; Friedman is a bankruptcy lawyer. Friedman is a strong supporter of Jewish settlements in the West Bank and heads an American fundraising operation for a settlement.

“I don’t think that a two-state solution is a productive way for people to be spending their time in the short term,” Friedman told the Forward in a May interview.

The previous Republican platform, adopted in 2012, supported a two-state solution, stating that Republicans “envision two democratic states — Israel with Jerusalem as its capital and Palestine — living in peace and security.”

Indeed, support for establishing a Palestinian state alongside Israel has been a cornerstone of American policy in the Middle East supported by both Democratic and Republican administrations. The American Israel Public Affairs Committee, the largest pro-Israel lobbying organization in America, also views it as a fundamental principle. The lobby failed in its efforts to include a reference to a two-state solution in the current platform.

“We appreciate that once again the Republican platform has taken a strong pro-Israel stand,” AIPAC spokesman Marshall Wittmann said in a statement.

In presenting the language to the full committee the morning of Tuesday, July 12, South Carolina state legislator Alan Clemmons, who was the key backer of the new platform, said it “captures the true sentiment” of the party toward Israel. He also argued that the claim that Israel is an occupier in the West Bank is an expression of anti-Semitism. His passionate speech was met with a standing ovation from committee members, the only one during the two-day long voting process.

The current Israeli government’s policy does not include support for a two-state solution, but Israeli Prime Minister Benjamin Netanyahu has at times declared his intention to pursue negotiations based on the notion of two independent states living side by side peacefully.

The new Republican platform also takes another step away from the U.S. government consensus on the Israeli–Palestinian conflict by stating, “We reject the false notion that Israel is an occupier” in the West Bank territories.

Both the United Nations and the United States have referred to the West Bank as “occupied” since the 1967 war, when Israel took control of it.

The new plank on Israel also describes support for Israel as an “an expression of Americanism” and encourages legislation aimed at countering efforts to boycott Israel.

While nonbinding in nature, the Republican decision not to advocate for a two-state solution and to declare that Israel is not an “occupier” demonstrates a shift within the party’s base toward a policy more similar to that of Israel’s right-wing parties.

George W. Bush’s deputy national security adviser, Elliott Abrams, expressed on July 3 opposition to any attempt to tinker with the platform wording on the issue, telling CNN that “it would be a great mistake for anything in the Republican platform to attack or criticize the two-state solution in any way.”

The National Jewish Democratic Council spoke out against the new platform language, stating, “When it comes to Republican rhetoric on Israel and the two-state solution, they can’t even find themselves to be in line with the rhetoric of the prime minister of Israel.”