Are Republicans Facing a Nasty Platform Battle of Their Own Over Israel?

WASHINGTON – The Democrats are not the only ones grappling with tension over the issue of Israel as the presidential nominating conventions approach.

The Iron Dome Alliance, a new fundraising organization whose name pays tribute to Israel’s mobile rocket defense system, is leading the Republican charge to change their party’s stance on the two-state solution: one for Israelis, one for Palestinians. The party supports it, albeit cautiously; the Iron Dome Alliance wants to leave the question of Israel’s security entirely in Israel’s hands.

“We oppose any measures intended to force, coerce or otherwise impose a security ‘solution’ or artificial borders on the Jewish state,” the Iron Dome Alliance wrote in its proposed platform language.

The alliance is pushing its agenda with the Republican Party because the debate over the Iran nuclear deal in 2015 showed that Republicans, who agreed with the Israeli government in opposing the deal, are more attentive to the perceived needs of the Jewish state. And the platform-writing process is a good time to pick a fight with the American Israel Public Affairs Committee, the powerful pro-Israel lobby that sees outreach to both parties as central to its efforts.

Also, the alliance sees Donald Trump, the presumptive Republican candidate, as a political iconoclast who might be open to change.

“Someone who likes to succeed won’t agree to go down the road of something that has failed and failed again and again,” said Jeff Ballabon, chairman of the Iron Dome Alliance. “The idea of taking a new look at this is very important.”

To be sure, Trump’s influence on the Republican Party’s platform process is unknown.

The Republican battle is a mirror image of the one waged on the Democratic side by presidential candidate Bernie Sanders and his supporters. Democratic activists want to expand on their party’s endorsement of the two-state solution, now couched in terms of Israel’s interests, by also recognizing Palestinian rights. On both sides, activists are challenging long-standing mainstream principles by claiming that the party’s base has shifted to their side.

The current Republican platform, which was adopted before the 2012 elections, states that the party supports “Israel’s right to exist as a Jewish state with secure, defensible borders,” and that it envisions “two democratic states — Israel with Jerusalem as its capital and Palestine — living in peace and security.”

The Republican National Committee qualified its 2012 endorsement of a two-state solution by clarifying that in order to achieve this outcome, “the Palestinian people must support leaders who reject terror, embrace the institutions and ethos of democracy, and respect the rule of law,” but the alliance wants language that favors Israel more sharply.

“We will fight against any attempts to force or pressure Israel to recognize or support the creation of an Arab state in any part of the Land of Israel including Judea and Samaria,” the alliance states in its mission statement.

Set up as a super PAC, a campaign finance operation in which donors can spend unlimited amounts as long as they do not coordinate with the campaign, the Iron Dome Alliance has yet to spend any funds. But it is now in contact with other groups to explore how they might work together to change the platform, Ballabon said. He declined to specify which groups. 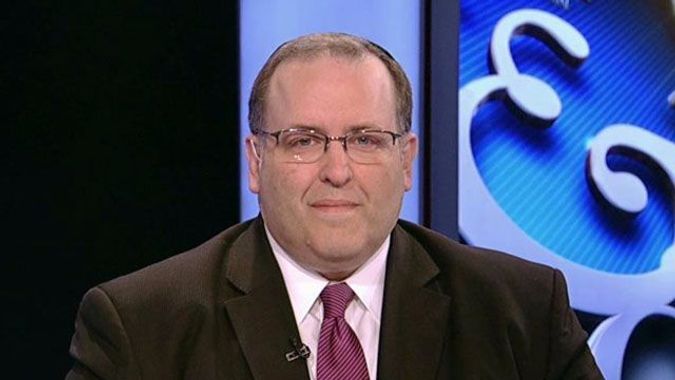 Jeff Ballabon is the founder of the Iron Dome Alliance, a Super PAC fighting for what it sees as Israel’s right to make its own decisions. Image by Jeff Ballabon

Later, the group will donate to candidates who will vote against legislation the alliance sees as coercive toward Israel.

In the meantime, the alliance will attempt to convert the Republicans into Israel’s best American friend, starting with the platform. Indeed, in the previous election cycle, a group of Republican Jews launched an unsuccessful effort to change the platform and eliminate the endorsement of a two-state solution. It was AIPAC, according to two activists involved in the talks at the time, that convinced RNC platform committee members to stick to the old language. And it is AIPAC that will be the strongest group pushing for that language again this time.

“AIPAC encourages both parties to continue to include language in their platforms that supports a strong U.S.-Israel relationship,” said the lobby spokesman, Marshall Wittmann.

Bipartisan support for Israel has been one of the foundations of AIPAC’s approach to lobbying, even at times when the lobby engaged in bitter fights with the administration, such as the debate over the Iran deal.

“Elections after elections, the establishment groups tell us it’s a win-win situation because both [parties] are good for Israel,” Ballabon said. “We’re saying it’s not so.”

Are Republicans Facing a Nasty Platform Battle of Their Own Over Israel?