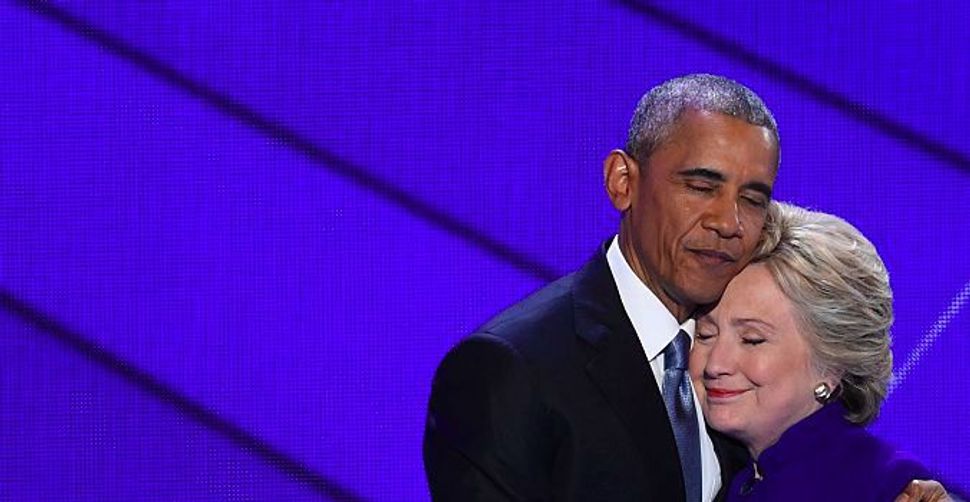 After Obama’s speech, Clinton, the Democratic presidential nominee, took the stage with him in a surprise appearance. She waved to the crowd and embraced Obama before exiting. She will speak tomorrow night, when she will accept the nomination.

Obama aimed to paint an uplifting picture of America in his speech, which listed and defended the key accomplishments of his term, from enacting universal healthcare to the agreement curbing Iran’s nuclear program. He portrayed Clinton as the successor who will build on his policies if elected.

“By so many measures, our country is stronger and more prosperous than it was when we started,” Obama said. “And through every victory and every setback, I’ve insisted that change is never easy, and never quick; that we wouldn’t meet all of our challenges in one term, or one presidency, or even in one lifetime.”

Obama said “there has never been a man or a woman more qualified than Hillary Clinton to serve as President of the United States of America.” And on a night revolving around Clinton’s national security experience, Obama said Clinton was ready to lead America’s military. Like several other speakers Wednesday, he recalled that she was in the room when his administration made the decision to kill Osama Bin Laden.

“I know Hillary won’t relent until ISIL is destroyed,” he said, referring to the Islamic State terror group. “She’ll finish the job – and she’ll do it without resorting to torture, or banning entire religions from entering our country. She is fit to be the next commander-in-chief.

Biden, who spoke before Obama, said Trump was unprepared to deal with the country’s national security challenges. He said Republican presidential nominee Donald Trump “has no clue what makes America great.”

“This is a complicated and uncertain world we live in,” Biden said. “The threats are too great, the times too uncertain to let Donald Trump be president of the United States. No major party nominee in the history of our nation has ever known less or been less prepared to deal with our national security.”

Kaine, accepting the vice presidential nomination, wove Spanish throughout a speech that centered on his faith and on attacking Trump. He called Clinton and himself “compañeros del alma,” or soulmates, and said in Spanish that he learned the values of faith, family and work in Honduras, “the same values of the Latino community here in our country. We’re all Americans.”