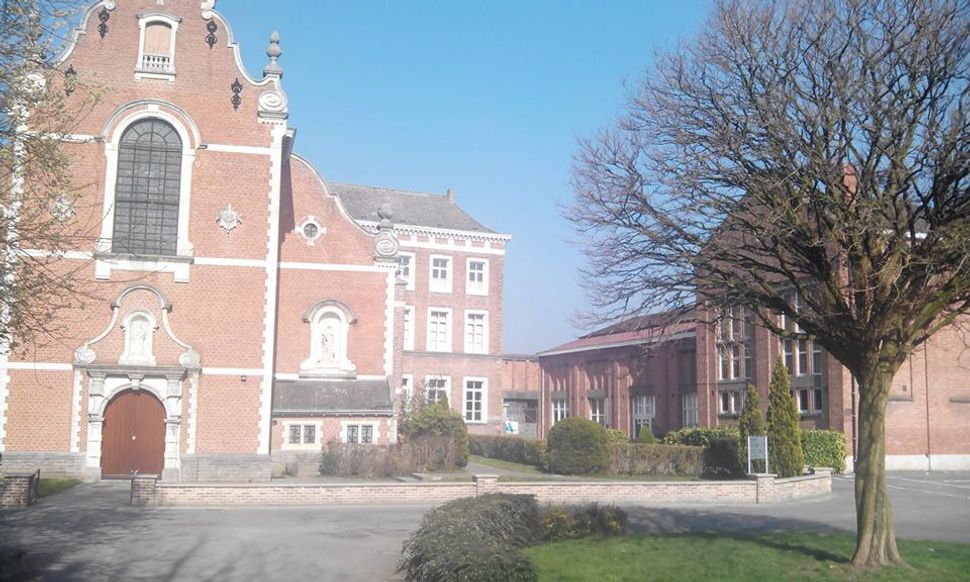 — Faculty at a Catholic high school in Belgium said they were proud of a senior teacher who won an award and a cash prize at Iran’s controversial cartoon contest about the Holocaust.

Luc Descheemaeker, who this summer retired from the Sint-Jozefs Institute high school in the city of Torhout, 60 miles west of Antwerp, accepted a “special prize” at the Second International Holocaust Cartoon Contest in Tehran in May for a drawing of the words “arbeit macht frei” over a wall with guard posts — presumably comparing Israel’s security barrier along the West Bank with the gates at Auschwitz.

The German sentence, which means “work sets you free,” was featured on a gate of the Nazi death camp in Poland. Descheemaeker, who spoke at the competition via a video uplink from Belgium, won $1,000 for the cartoon, organizers said. The first-prize winning entry was a drawing of a cash register shaped like Auschwitz.

UNESCO, the United Nations educational organization, has condemned the cartoon contest — the second organized in Iran since 2006 — as aiming “at a mockery of the genocide of the Jewish people, a tragic page of humanity’s history.”

In May, a staffer at the Belgian-Jewish publication Ragards sent to the school an email with a URL link to a webpage announcing the winners of the contest, accompanied with the text: “It must be a great pride for Sint-Jozefs Institute-College to be associated to the values Luc Descheemaeker stands for.”

Martine De Zutter, a senior faculty member, replied: “We are indeed very proud to have Luc associated with our school. His talent is of great value for the artistic education of our students!”

Asked by JTA whether the school is proud specifically of Descheemaeker’s award, School Director Paul Vanthournout on Wednesday said that the school had no position on the award, and that De Zutter did not refer specifically to the competition in her email to Regards.

But he confirmed the school was proud of Descheemaeker’s work within the institution, where he taught plastic arts and cultural sciences. He has put on educational plays about the Holocaust at school, Vanthournout said. In 2002, Descheemaeker won a royal distinction from Belgium’s Queen Paola for putting on a play about the Holocaust for children, an adaptation of Art Spiegelman’s award-winning graphic memoir “Maus.”

“I understand you find criticism on Israel’s actions in the West Bank and Gaza unpleasant,” he wrote to JTA, “but your consideration of it as anti-Semitic is exaggerated.”

According to the International Holocaust Remembrance Alliance – an intergovernmental organization with 31 member states, including Belgium – “drawing comparisons of contemporary Israeli policy to that of the Nazis” is an example of modern anti-Semitism.

Vanthournout said the school’s position is that the Holocaust, which he said “featured atrocities of hitherto unseen proportions,” cannot be compared or likened to Israel’s treatment of Palestinians. But the Holocaust he added, “cannot serve as an alibi to solving conflicts with violence.”

According to the Belgian school’s newsletter, which published an interview in June with Descheemaeker ahead of his retirement, he has accepted an offer to travel to Tehran to be a judge at the competition’s next edition.

Vanthournout said it never interfered with Descheemaeker’s career as a caricaturist.

A U.S. State Department spokesman warned the contest can “be used as a platform for Holocaust denial and revisionism and egregiously anti-Semitic speech, as it has in the past.”

In May, the United States Holocaust Memorial Museum noted that organizations that staged the contest “are sponsored or supported by government entities, including the Islamic Revolutionary Guard Corps and the Ministry of Islamic Guidance.”