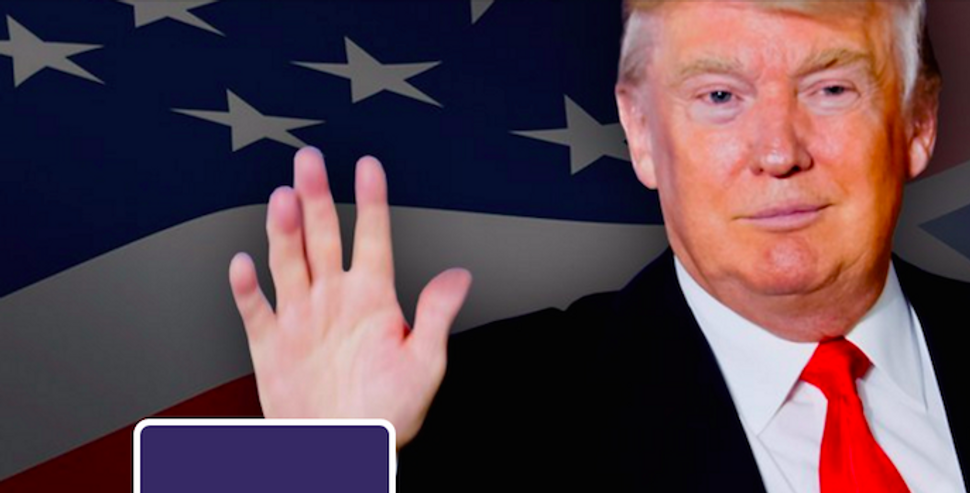 (JTA) — The Trump campaign has launched a Hebrew-language Twitter feed, aiming to boost support for the GOP presidential nominee in Israel and raising an interesting question: Just how many potential U.S. voters in Israel don’t speak English?

The feed, launched Monday night, is named “Campaign Trump b’Yisrael,” and uses the generic handle @USAISRAEL2016, though a quick search shows that the campaign could have chosen, say, @TrumpIsrael2016. Or @TrumpAviv.

In its first 19 hours of existence, the feed tweeted five times, and had 65 followers. One tweet was a pro-Israel quote from Trump’s Monday speech on foreign policy, where he said, “We will work side by side with our friends in the Middle East, including our greatest ally, Israel.”

The next three make arguments for Trump that are a bit more unorthodox. One tweets a graph showing that searches for “Trump” in Hebrew outpace searches for “Clinton” in Hebrew. The next two say Israel is in 27th place among the countries with the most Facebook fans for Trump, and only in 50th place on Clinton’s Facebook page, behind South Korea, Saudi Arabia and Turkey. The feed doesn’t clarify why having fans from South Korea, an American ally with a much larger population than Israel, is a problem.

Republicans Abroad Israel is making an aggressive push to register the estimated 300,000 U.S. citizens in Israel eligible to vote. The group claims the vast majority of those voters will choose Trump. Israelis overall, however, said Clinton would be more pro-Israel than Trump, 38 to 28 percent, according to the Israel Democracy Institute poll from May.

Maybe this Twitter feed can change that, one Google search graph at a time.