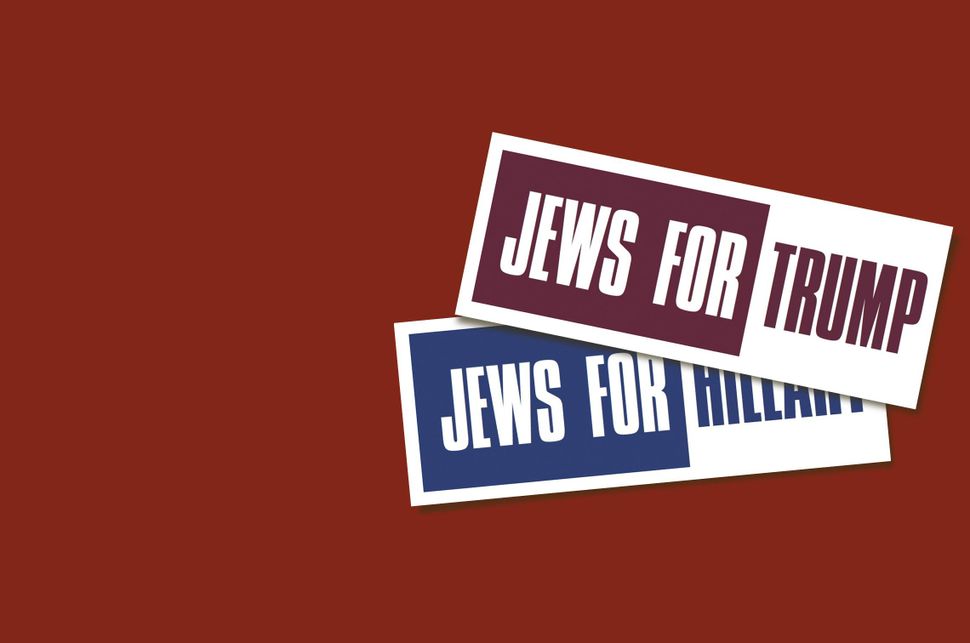 Is it an original fundraising idea, or a dip into partisanship?

The American Jewish Congress is offering its supporters a bumper sticker bearing the slogan “Jews for Trump” or “Jews for Hillary” in return for a $10 minimum contribution to the organization.

“We will share the number of bumper stickers of each candidate with members of the community and use it as a tally,” states the mass email sent to supporters on Thursday.

Giving supporters with an option to chose either candidate provides the AJCongress with the cover to ensure it does not breach the restrictions on tax-exempt organizations from endorsing a political candidate. But the move still stands out as unusual in this election year amid widespread communal criticism for Trump.

Several major Jewish organizations, including the Anti-Defamation League and the American Jewish Committee, have condemned him for singling out Muslim immigrants and for accepting support from white supremacists. In fact, even the Republican Jewish Coalition, which has endorsed Trump after he clinched the GOP nomination, did not issue stickers expressing Jewish support for Trump.

“This is shameful and sad,” said Stosh Cotler, CEO of Bend the Arc Jewish Action. “The business-as-usual position of political neutrality is not acceptable for Jewish organizations this year.” She added that the group finds it “especially ironic” that the AJCongress “would enable such support of the Trump campaign” given its progressive history and roll in organizing the 1963 March on Washington.”

The AJCongress, in a written comment to the Forward, said the initiative was an “internal survey of our supporters and followers to take the temperature of where they stand on the presidential candidates.” The group noted that it is “committed to ensuring that whoever is elected, we are able to share the perspective of members of the American Jewish community with the White House so that we can work together to maintain and protect Israel’s safety and security.”

The American Jewish Congress, once considered one of the nation’s largest Jewish groups, is now trying to raise its profile. It’s headed by Jack Rosen, who is also its largest donor. Rosen is a longtime Clinton supporter and financial backer; under his leadership, the AJCongress issued a statement applauding Hillary and Bill Clinton for their support for Israel.