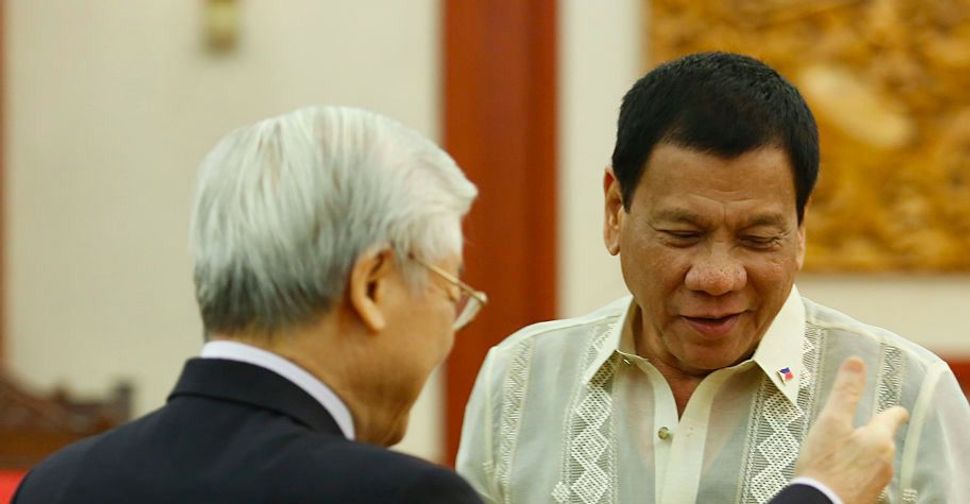 (JTA) — Philippines president Rodrigo Duterte apologized to members of the country’s Jewish community for suggesting that he would kill as many drug dealers as Adolf Hitler did Jews.

“Please accept my apology. It will never happen again,” Duterte said Tuesday at the Beit Yaacov Synagogue in Makati, a city in the Manila metropolitan area where the Jewish community was celebrating Rosh Hashanah.

“That is why I am here, to say I’m sorry because I respect the Jewish people,” he said during his speech, according to the local news site .

Last week, Duterte compared his campaign to eliminate drug use in his country to the Holocaust, saying he would like to kill millions of drug dealers and users. “Hitler massacred 3 million Jews. Now, there are 3 million drug addicts. … I’d be happy to slaughter them,” he said.

Critics objected not only to his invocation of the Nazi leader but to Duterte’s seeming halving of the number of Jews killed in the Holocaust.

In his apology, Duterte said the remarks were a slip of the tongue.

“It was just a mental slip of the numbers of 3 [million] and Hitler’s [number],” he said, according to Rappler. “It had nothing to do with the memory of the Jews because in my country we do not tinker with memories of our ancestors. It was just a play of the tongue.”

Duterte also noted that his former wife, Elizabeth Zimmerman, was of Jewish descent.

“For the life of me, you have never heard of a single word. As a matter of fact, my wife, Zimmerman, she was a descendant of an American Jew,” said Duterte at the synagogue.

Duterte also addressed the congregants originally from Israel, offering a back-handed compliment in saying he would not advise his government to buy arms from any country except Israel. “Why? Because we have excellent relations and if you send us this gadget they will not include a bug there that for them to listen also to what we’re saying,” said Duterte, who last month spoke insultingly of President Obama. “If I get it from America, you are talking in secret – blah blah blah – and they are listening before you buy it.”

Paul Rosenberg, president of the Jewish Association of the Philippines, told Rappler he accepted Duterte’s apology. “I think it was quite clear that I think it was sincere,” Rosenberg said.

The United Nations and the European Union both oppose Duterte’s drug war tactics. Many of the related killings have been carried out by vigilante groups, who target names on police lists — which may or may not be accurate — and, according to the Washington Post, leave bodies on the sides of roads with signs that read “pusher.”