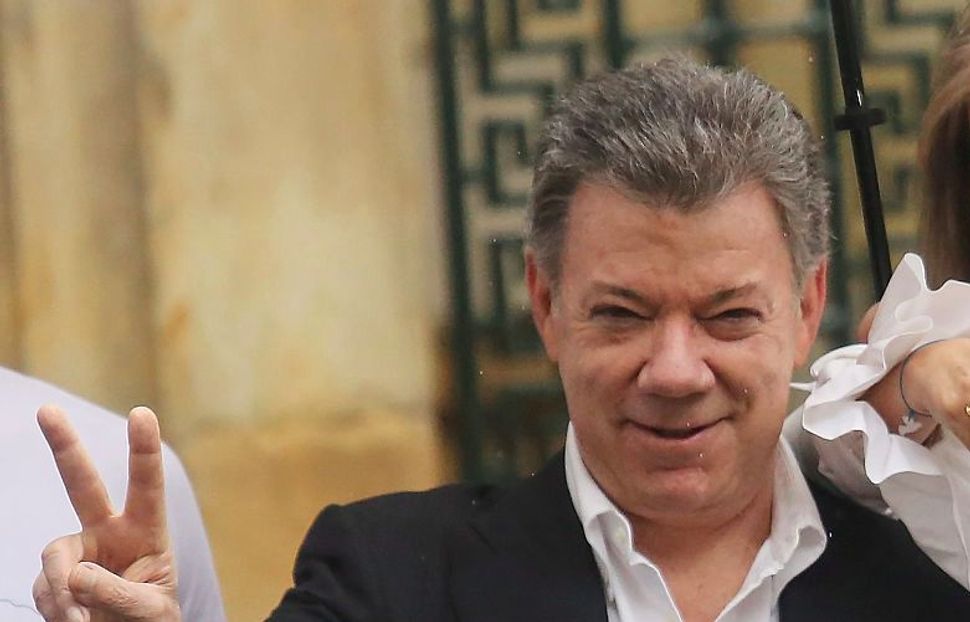 Colombian President Juan Manuel Santos won the 2016 Nobel Peace Prize on Friday for his efforts to end a 52-year-old war with Marxist rebels, a surpise choice after Colombians voted against the accord in a referendum.

The Norwegian Nobel Committee said Santos had brought one of the longest civil wars in modern history significantly closer to a peaceful solution but there was still a real danger the peace process could come to a halt.

“The award should also be seen as a tribute to the Colombian people,” committee leader Kaci Kullmann Five said. Voters did not say “No” to peace but to the agreement, she said.

Although the peace prize is notoriously difficult to predict, some observers had suggested Secretary of State John Kerry could win, perhaps along with Iranian leaders, for their role in forging the controversial nuclear deal with the Islamic republic.

The world overwhelmingly supported the deal as a step to peace but Israel strongly oppposed the agreement and has denounced it as opening the door for Tehran to eventually obtain nuclear weapons.

The award pointedly excluded FARC guerrilla leader Rodrigo Londono, better known by his nom de guerre Timochenko, who signed the accord with Santos.

Santos has promised to revive the peace plan even though Colombians narrowly rejected it in the referendum on Sunday. Many voters believed it was too lenient on the FARC guerrillas.

Some Nobel watchers had taken Colombia off their lists of favorites after the referendum “No.”

“There is a real danger that the peace process will come to a halt and that civil war will flare up again. This makes it even more important that the parties, headed by President Santos and FARC guerrilla leader Rodrigo Londoño, continue to respect the ceasefire,” the committee said.

“The fact that a majority of the voters said “No” to the peace accord does not necessarily mean that the peace process is dead,” it said.

More than 220,000 people have died on the battlefield or in massacres during the struggle between leftist guerrillas, right-wing paramilitaries and government troops.

Millions have been displaced and many beg on the streets of the capital, while economic development has been stunted in the mostly rural nation.

“It’s a message of hope for my country and for peace in Colombia,” the country’s ambassador to Norway, Alvaro Sandoval Bernal, told Norwegian broadcaster TV2.

“It reiterates that there is hope for the peace process in Colombia.”

Asked why the Londono was left out, Five said Santos had been central to the process.

“President, Santos has been taking the very first and historic initiative. There have been other tries, but this time he went all-in as leader of the government with a strong will to reach a result.

“That’s why we have put the emphasis on president.”

She declined to elaborate on Londono’s role. “We never comment on those who do not receive a reward.”

Santos is the first Latin American to receive the peace prize since indigenous rights campaigner Rigoberta Menchu of Guatemala won in 1992, and is the second Colombian after writer Gabriel Garcia Marquez, who won the literature prize in 1982.

The scion of one of Colombia’s most prosperous families, Santos was not thought likely to spearhead a peace process with FARC (the Revolutionary Armed Forces of Colombia).

But though he had served as defense minister under hardline ex-president Alvaro Uribe, when the FARC were weakened by a U.S.-backed offensive, Santos used his two terms in office to open negotiations with rebel leadership at four-year long talks.

His family once owned leading Colombian newspaper El Tiempo, where Santos worked as an editor before turning to politics. He also trained as an economist at the London School of Economics.

Santos was finance minister in the 1990s, helping to steer the Andean nation through one of its worst fiscal crises.

The talks made bitter enemies of Santos and Uribe, who accused his former protege of betraying FARC victims, and who founded a new right-wing political party and won a Senate seat, in an effort to undermine Santos’ peace efforts.

The one-sided prize echoes previous awards, such as to South Korean President Kim Dae-jung in 2000 for his work for reconciliation with North Korea. And West German Chancellor Willy Brandt won in 1971 for his policies of reaching out to the communist East. IRA guerrillas were excluded from the 1998 prize to Catholic John Hume and Protestant David Trimble for their peace agreement.

But often the awards go to both sides in peace negotiations, such as to Israelis and Palestinians in 1994 or to Egypt’s Anwar Sadat and Israel’s Menachem Begin in 1978.