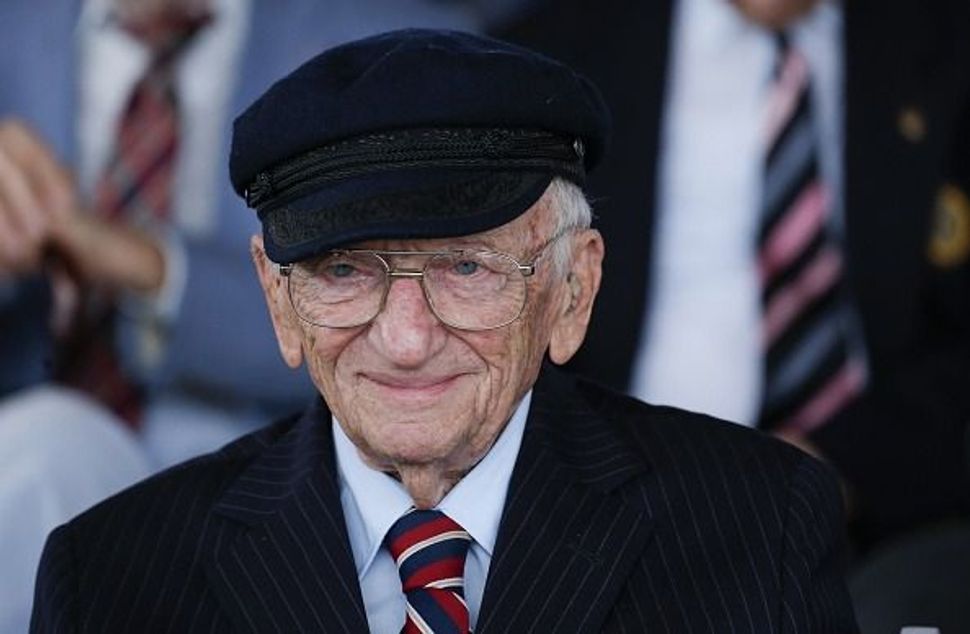 Everyone who participated in the Nuremberg Trials — defendants, prosecutors, judges — is now dead. Except one – Benjamin Ferencz, the 96 year old who almost seven decades ago secured convictions against 22 top Nazis in the historic war crimes tribunal. The retiree and son of Romanian Jews told National Public Radio on Monday that the trials persuaded him that law, not war is the answer to solving the world’s problems.

After graduating Harvard Law School in 1943, Ferencz entered the army, serving in combat as the Allies wore down the Nazis. Once the war ended, he returned to his skills as an attorney, visiting concentration camps and gathering evidence for use in the prosecution of high ranking Third Reich functionaries.

“The most important evidence was the death registries: who was in the camp, how long, the names of the officers, photographs, evidence to prove the crime beyond any possible doubt,” he recalled in the NPR interview.

He saw the worst carnage of the Holocaust at camps like Buchenwald and Mauthausen.

“It was hell. Absolute hell. Dead bodies all around the place piled up like cord wood before the crematoria,” he said. “All diseases, rats, lice, dysentery.”

In addition to leading prosecutions, Ferencz had to decide who deserved to be prosecuted, which he remembered as a hard choice.

“The question — how, why do we stop at 22? Only 22 seats in the dock. Three thousand men could have been tried for the same crimes… There were 3,000 men who, every day for about two years, went out and slaughtered people because they were Jews or Gypsies, and I selected them on the basis of their rank and their education.”

Now living in a Florida bungalow, Ferencz donated $1 million two months ago to the Holocaust Museum and Memorial in Washington, D.C. According to him, his efforts at Nuremberg were about showing the value of the rule of law.

“I was trying to prove that the rule of law should govern human behavior and nobody should treat human beings that way,” he said. “I am ashamed that we had the genocide in Rwanda and elsewhere since that time.”

Ironically enough, the Nuremberg Trials were attacked in their own time as travesties of justice.

There was no historical precedent to try individuals for carrying out state actions, and some believed that retroactively treating those activities as a crime violated legal norms. Critics also pointed to the fact that no Allies combatants faced prosecution for their own questionable tactics — the wholesale destruction of Dresden, Germany or the firebombing of Tokyo, for example.

Still, Ferencz said nations should resolve conflicts peacefully, and through legal means, instead of through war.

“I have boiled everything down into a slogan: law not war. Three words.”

How to get there? He leaves that task to the next generation.

“I have also three words: Never give up. And that’s what I’m doing,” he said. “And all I can do as an old man [is] sit here in a little bungalow in Florida and urge the world to come to its senses. Good luck, world.”