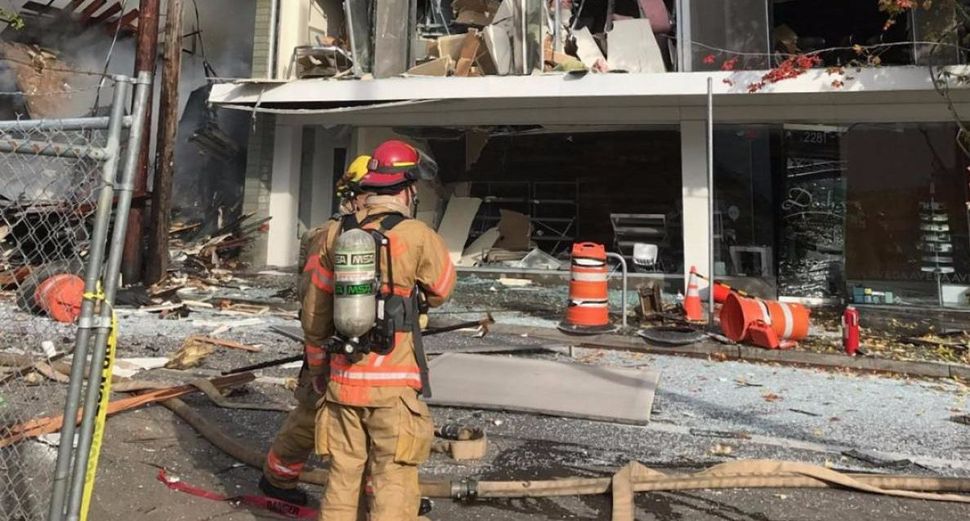 Three firefighters, three civilians and two police officers were injured on Wednesday after a natural gas leak caused a pair of explosions at a bagel shop in Portland, Oregon, Portland Fire & Rescue said.

The blasts obliterated the Portland Bagelworks restaurant, triggering a four-alarm fire that sent a large plume of black smoke into the air. Nearby businesses in the trendy shopping area were also damaged.

Fire & Rescue Chief Mike Myers told a news conference that in his 28 years as a firefighter he “had not seen devastation like this in my entire career.”

No fatalities were reported and the injuries were not life threatening, Fire & Rescue Lieutenant Rich Chatman said. Two of the firefighters sustained broken legs, one of whom required surgery, he said.

About 100 firefighters were on the scene of the fire putting out hot spots, Chatman said. Structural engineers as well agents from the Bureau of Alcohol, Tobacco and Firearms and Explosives were on the scene investigating, he said.

The incident began when a contractor hit a gas line of utility company NW Natural, prompting an evacuation of the building. When crews started to respond the leaking gas ignited, causing the two simultaneous explosions, fire officials said.

It is unclear what ignited the blasts.

Myers said careful and quick thinking by one fire official, Lieutenant Peter St. John, likely saved the lives of many residents and firefighters “single-handedly,” by pulling fire alarms and helping evacuate people before the explosions.

Myers said St. John suffered serious injuries and was being treated at an area hospital.

Photos published by local media outlets showed piles of debris strewn about the area, as well as windows blown out in nearby structures.

Authorities said residents and businesses in the area could be displaced for “a long time.”

Melissa Moore, a spokeswoman for NW Natural, said gas has been shut off for about 115 customers in the area. Portland General Electric said about 2,300 people in the area were without power.—Reuters