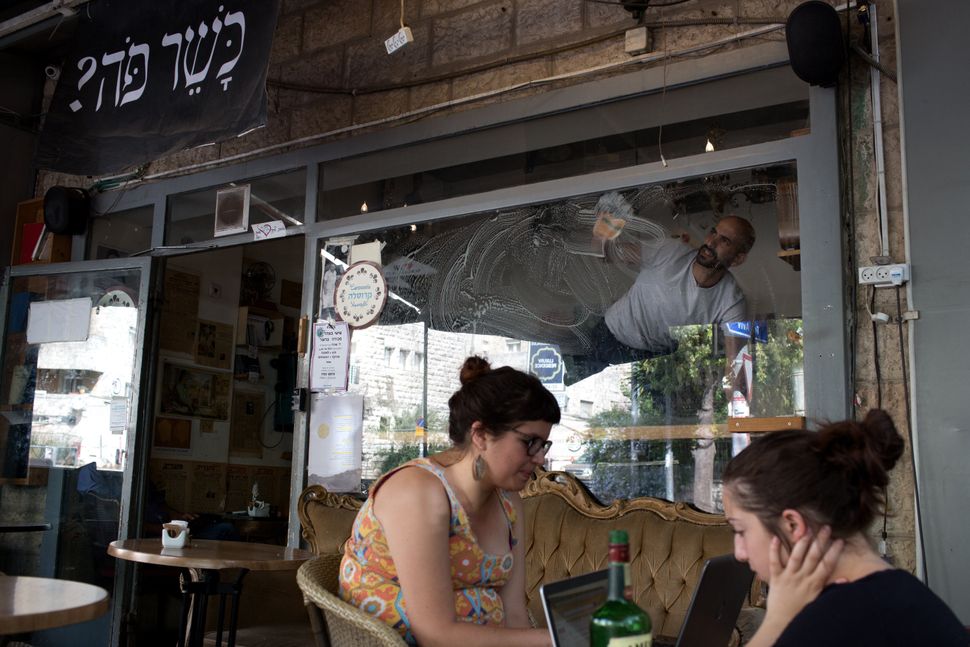 Behind Israel’s food and tourism industries thrives a parallel economy run by rabbis and a legion of inspectors whose business it is to make sure everything is kosher.

Since most Israelis prefer knowing their food is prepared according to Jewish custom, hotels, restaurants and manufacturers have little choice but to go along with the arrangement – adjusting their kitchens, modifying ingredients, and paying a fee to get a must-have kosher certificate.

But new data shows the system is weighing on the economy, draining productivity, pushing up prices and allowing large cash balances to accumulate off the books, angering tax authorities.

Roni Hamama tends to bang on the table when describing his dealings with the kosher network. He owns five stores around Israel that sell roasted nuts and seeds. Each outlet falls under the jurisdiction of a different rabbi.

“With each store it’s a different battle, every store has to follow different rules,” said the businessman, giving the table another bash. “You become a hostage to all the demands.”

Even though most Israelis are secular, it is estimated that about 70 percent of Israeli Jews want access to kosher food.

To help maintain the delicate status quo between Israel’s Orthodox and non-observant Jews, the government has effectively given the rabbis free rein to administer the kosher regime as they see fit, with oversight from the Chief Rabbinate.

Over the years the system has grown so tangled that the OECD, a club for developed countries, recently singled out Israel’s “religious dietary rules” as helping to “hamper the functioning and efficiency of the food and retail sectors, which is in turn contributing to the weaker economy-wide productivity growth in Israel.”

At the top of the kosher economy sits the Chief Rabbinate Council, a government-backed body with wide-ranging authority, overseeing all Jewish rituals from marriage to circumcision. It has a monopoly on declaring whether food-related businesses – from wedding halls to sushi restaurants, in-flight airline coffee to wineries – operate in accordance with Jewish law.

Several thousand inspectors – it is not clear exactly how many – make onsite visits daily to check things like food sanitation, the separation of dairy from meat products and that materials are bought from suppliers who are also approved.

It even sends delegations abroad to inspect slaughterhouses that export beef to Israel.

For more devout consumers, a seal-of-approval from specific rabbis not connected to the chief council is needed, and dozens of private groups have popped up offering competing, extra-special-kosher certificates.

This has a created a situation where, according to one official, 17 inspectors every day descend upon a single food court in Jerusalem’s main mall, all at the expense of the business owners, who pass on costs to consumers.

Fees vary, but the owner of a falafel stand could pay about 1,500 shekels ($394) a month for kosher approval.

Nationwide, that adds up to about 2.8 billion shekels ($730 million) a year, accounting for 2.2 percent of turnover in the hotel industry and as much as 2 percent of all food services, according to a draft report by Israel’s Finance Ministry.

“It’s not work being done against keeping things kosher, it’s against the way the system is set up today,” said Maayan Nesher, a finance ministry official involved in the report. “We think the public should not have to pay for those extra costs.”

Those running the kosher network say the inefficiency figure of around 600 million shekels a year is much lower – closer to 30 million shekels. And the inspectors, they say, work with the business owners to make the process as smooth as possible.

“Our interest is that the maximum amount of businesses will be kosher,” said Oded Fluss, director-general of the Ministry of Religious Services, which oversees the Chief Rabbinate. “If costs are too high, they will simply say ‘forget it’.”

But there is room for improvement, he acknowledged.

To cut out frivolous costs and possible corruption, his office is pushing for more uniformity among rabbis in their enforcement of the religious laws, and it is developing a digital database to track suppliers within the network.

The dozens of smaller, private authenticators, however, do not answer to the Chief Rabbinate. They set their own standards and prices and no one knows exactly how much money they make.

Israel’s State Comptroller, an official watchdog, issued a report in 2014 saying that “hundreds of millions of shekels” are changing hands among those smaller groups. It described frequent tax avoidance and even cases of suspected money laundering.

The Tax Authority has promised to crack down, issuing a warning earlier this year that it would seek out this hidden revenue, and has already begun its intelligence gathering.