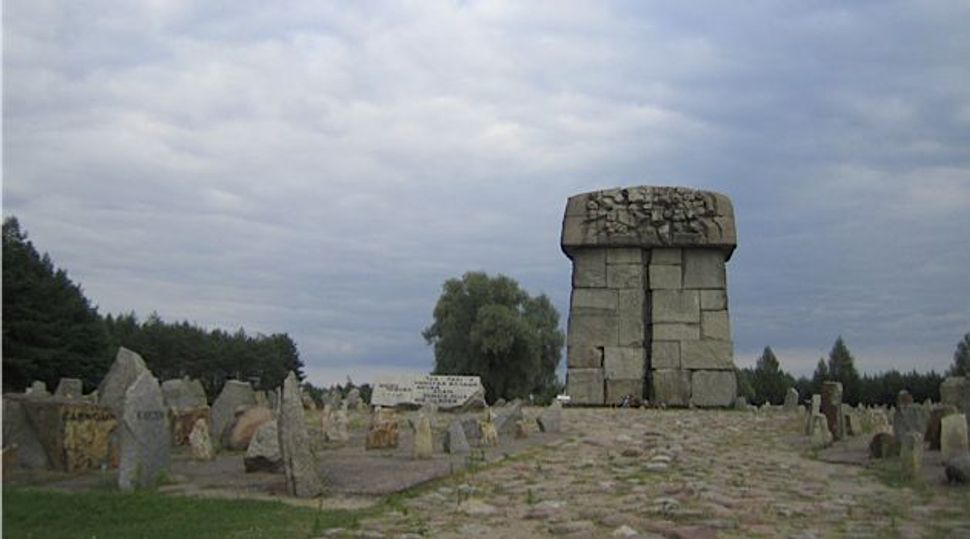 Pritzker Priority: The Treblinka death camp memorial in Poland. The Pritzkers have given generously to Holocaust education and memorials. Image by wikimedia commons

— Amid growing pressure on Poland and other Eastern European countries to offer full restitution for plundered Jewish property, the European Parliament’s president reiterated his support for such moves.

Martin Schulz, whose European Parliament has passed two resolutions in the 1990s calling for restitution, spoke about the issue in a letter he sent last month to Gunnar Hökmark, a lawmaker from Sweden and chair of the European Alliance for Holocaust Survivors.

“I personally acknowledge the importance of the restitution of and compensation for immovable property, Jewish art heritage and other cultural assets pillaged during the Holocaust and its aftermath,” Schulz wrote. “I therefore fully endorse implementation of the European Parliament resolutions on the Return of Plundered Property to Jewish Communities and the Restitution of the Possessions of Holocaust Victims.”

The World Jewish Restitution Organization, or WJRO, praised Schulz’s statement. In a statement Thursday, its chair of operations, Gideon Taylor, called it “a major step forward to address with compassion and justice the care of aging Holocaust survivors, and the return of property unjustly taken during the Holocaust and its aftermath.”

Several countries in Eastern Europe with confiscated Jewish property worth billions of dollars have resisted offering compensation, at times despite committing to do so in legislation and international documents.

Poland,  where 3 million Jews lived before the Holocaust, was among 46 nations that signed a 2009 declaration committing to restitution legislation for Holocaust-era property seized by the Nazis. But it has not passed any restitution laws for private property, making it one of only a handful of former Communist countries without such legislation.

In 1997, Poland passed a law for restitution on communal-owned properties but more than 15 years after the claim filing deadline, a majority of more than 5,000 claims for such property has still not been resolved and most of the resolved claims have not led to restitution or compensation, the WJRO said.

Polish courts have awarded compensation and restitution to several Jewish claimants in recent years, but on an unknown scope and only on a per-case basis.

In 2014, a group of British parliamentarians pressed Poland’s government to follow through on its restitution pledges.

“Unfortunately, Poland stands out in its failure to fulfill – or even recognize – its responsibility to victims,” said a letter sent to Polish officials by 15 British members of Parliament and 35 lords and baronesses.

The primary signatory was Ruth Deech, a Jewish member of the House of Lords who had grandparents on both sides of her family with substantial property in Poland.