After Shiva, a Poignant Tribute to Grandma at (Natch!) President and Clinton Streets 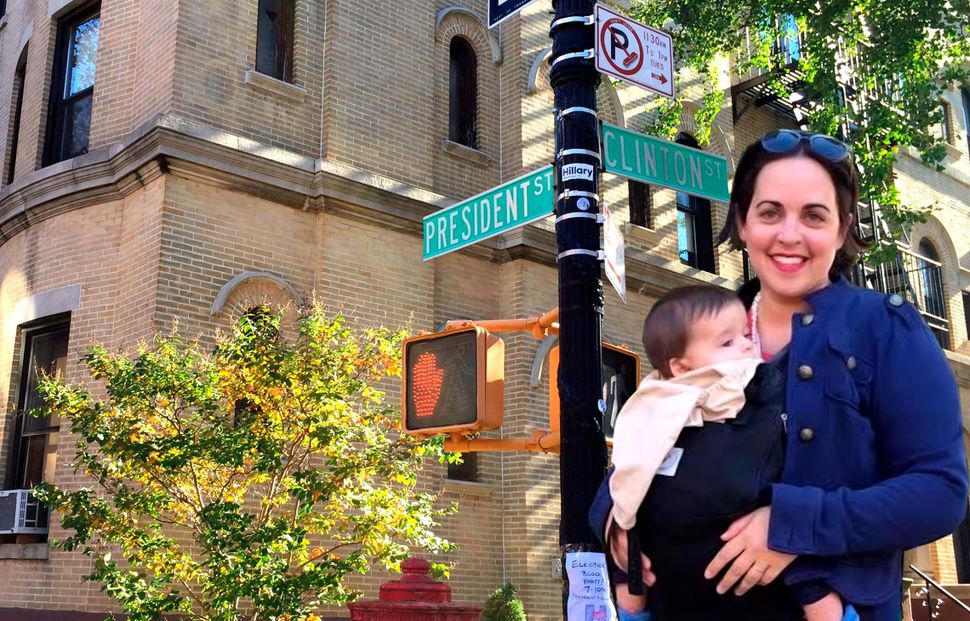 Lucille Goldman passed away last week at 91, a few days after casting her absentee vote for Hillary Clinton.

After her shiva ended this morning, Lucille’s granddaughter, Adina Lerner, matched a blue pantsuit with one of Lucille’s necklaces, and took a walk down the block to see President Clinton.

That’s the intersection of President Street and Clinton Street in Carroll Gardens, Brooklyn, a quiet corner that was transformed this morning into the backdrop for a thousand Instagram posts.

“This is such a monumental time, and we’re only a twenty minute walk from this sign,” Lerner said, with her eight-month-old son strapped to her chest and her three-year-old daughter napping in a stroller. “It really just feels amazing today.” 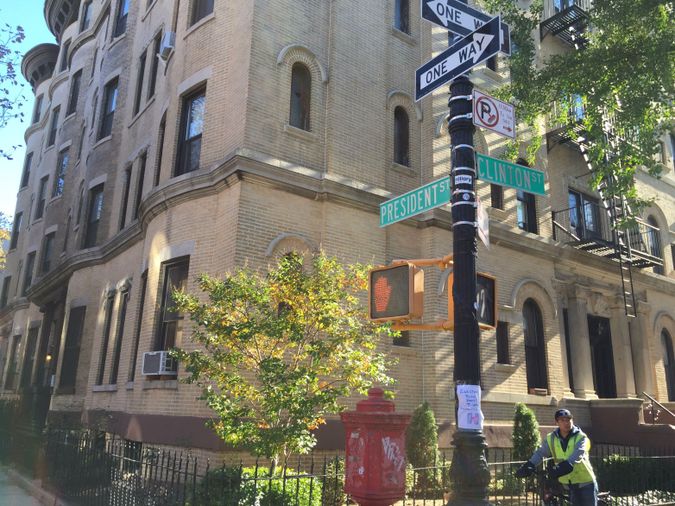 The perfect shot of the street signs was tricky to capture in the early afternoon light. The arrangement of the “President” and “Clinton” signs was best on the lamppost at the northeast corner of the intersection, but the sunlight befuddled the lenses on cell phone cameras.

“That’s perfect,” said one woman who noticed the crowd and looked up at the sign. “I never even thought about it. Let’s take a picture.”

Others had made the trip with the shot in mind. “We all had the same idea,” said Sean Tarrant, an Irish citizen who rode down from Park Slope on a CitiBike to take the picture.

“All of my relatives in Ireland are biting their fingernails and holding their breath,” Tarrant told the Forward.

The crowd waxed and waned, as people stopped by for their own shots at social media virality. Journalists from the website Buzzfeed were on hand to record a video report. Passerby offered to take each other’s photos.

Clinton & President is a residential intersection with an out-of-business pharmacy on one corner. The nearest polling site is at the Brooklyn Public Library branch one block away. Photos of the intersection’s street signs began appearing on social media in the past few days; it’s now gone something close to viral.

A sign posted on one of the lampposts advertises a block party at the intersection beginning at 7 PM this evening.

It’s not the only nearby street corner with pro-Hillary potential: A few blocks north, Clinton Street intersects with Kane Street. There is unfortunately no Vice President Street in Carroll Gardens.

After Shiva, a Poignant Tribute to Grandma at (Natch!) President and Clinton Streets