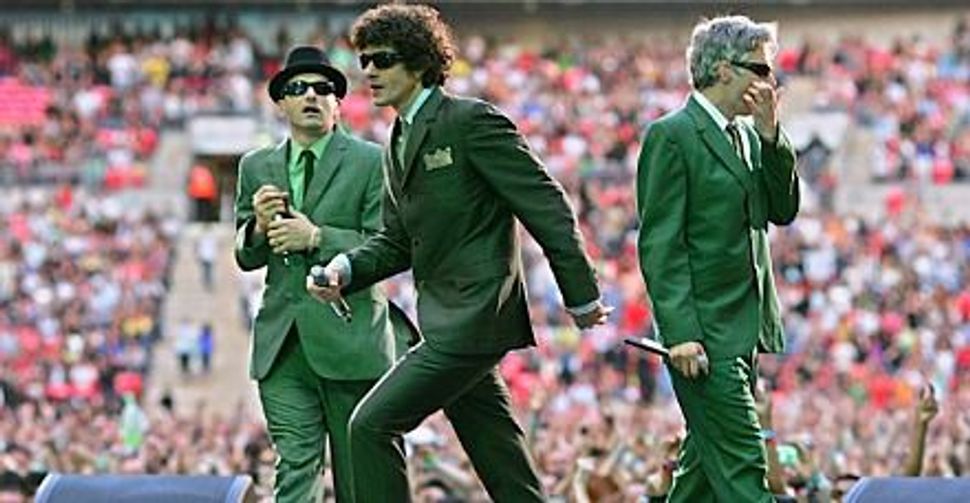 — Hundreds gathered for an anti-hate rally at a vandalized Brooklyn park named in memory of the late Beastie Boys singer Adam Yauch.

The rally Sunday at the Adam Yauch Park in Brooklyn came after the park was defaced with swastikas and the message “Go Trump.”

Yauch, known as MCA, died in 2012 at age 47 of cancer of the salivary gland. All three original members of the Beastie Boys were Jewish.

The graffiti were painted over by city workers prior to the rally. The playground equipment that had been vandalized was covered with paper flowers and hearts by local children over the weekend.

“We’re all here today because we’re thinking the same thing: Painting swastikas on a children’s playground is a messed-up thing to do,” Horovitz told the crowd. “And for many of us, it has special meaning, because this park is named for Adam Yauch, who was my friend and band mate for over 30 years, but he was also someone who taught nonviolence in his music, in his life, to all of us and to me. But, this is more about someone in New York City linking Nazi Germany to Donald Trump in a ‘hell yeah’ kind of way.”

Stiller also spoke: “As a New Yorker and a parent and an American, I thought it was really important to stand up and say this isn’t OK,” Stiller reportedly said. “Hate crimes aren’t OK, and especially this happening in Adam Yauch Park when Adam Yauch was so about peace and non-violence.”

Following the discovery of the vandalism, the Beastie Boys Twitter account posted a message Saturday that read: “Hate has no place in Brooklyn, NYC, or America. Join us on Sunday to stand against hate messages.”

Several swastikas have been scrawled in New York City and around the state since Election Day on Nov. 8, including on the doors of several dormitory rooms at the New School and on the apartment building of a gay Jewish state lawmaker in the Greenwich Village neighborhood of Manhattan.